Grands Are Not Just Biscuits In The Refrigerator Aisle 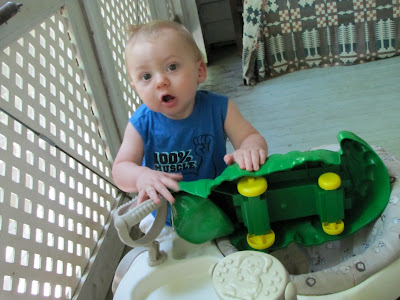 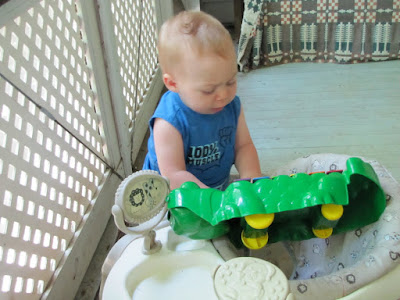 Some days when Owen comes over he has a sort of Dennis The Menace hairdo going on. One morning it was quite pronounced and I asked his daddy who'd done his hair.
"Pillow and pillow," he told me in his dry, humorous way.
Today that little tuft was sticking up and although it wasn't the faux-hawk he sometimes sports, it was cute.
Everything about Owen is cute to me. I was talking to Kathleen this morning about that brain-study woman and Kathleen and I decided that surely there are pheromones which make us good grandmothers. I can't really come up with any other biological explanation for why I am so insanely in love with this small boy. I mean sure, he's cute. But hell- so are most babies. Okay, okay. ALL babies are cute. But in my secret heart-of-hearts, I am thoroughly convinced that Owen is the cutest baby of all times ever in the universe. And I know that logically, this is probably not true. Maybe.
But logic has not one fucking thing to do with how I feel about my grandson.
The funny thing is is that before he was born, I was a tiny bit afraid that I might not feel the way about a grandchild that everyone said you would feel. I mean- didn't I just spend the last thirty-something years raising my own children? Haven't I been raising children since my baby brother was born when I was thirteen? Hadn't I changed my share of diapers, wiped my share of poopy butts and snotty noses? Hadn't I just achieved a measure of time that was mine and mine alone?
Hadn't I?

And I was worried. What if I was one of those grandmothers? The kind that is quite content to see the child once in awhile, clean and diapered and fed and then when one of those situations reveres itself is quite happy to hand the child back to its rightful owners. The kind that when asked to babysit always has something else to do.

But one thing really gave me a feeling that maybe I was worrying too much about something that wasn't bound to happen and that one thing was the word that a lot of African-Americans call their grandchildren by which is simply, Grands. And great-grandchildren are, of course, Great-Grands.
I mean- come on. If grandchildren weren't the best thing since sliced bread, why would they be referred to as grands? And why would those grandparents smile that smile when they said the word?

I kept that thought in my heart and then, when Owen was born after so many hours of brave and strong work by his mama and such loving and constant support by his daddy, I knew that Grand was the perfect name for these children-of-our-children and every day I am made more aware of that fact.

Owen is just grand. Everything he does is grand. Whether he is wiggling like a monkey trying to get off the bed while I change his diaper or he is singing his Owen song with a voice as loud and deep as an opera singer's or whether he is laying his full weight against me with sleepiness, or whether he is scooting across the kitchen to open a different cabinet or whether he is studying a chicken closely to see what makes it tick- well, it doesn't matter. Whatever he does seems perfectly grand to me.

A grand-child is perfectly named. Damn. Who would have guessed?

And all of this makes me wonder- will Owen feel that I too, am grand? And his other grandmother and his grandfather? Will he?

When I knew that I was going to be helping take care of Owen when Lily went back to work, I wondered and worried (yeah- I do both of those way too much- I know) about how I would be able to take care of a baby without the boob. Nursing had been such a huge part of my own baby-raising. How could I comfort and give a child what he needed without lactating? Seriously. I was completely baffled and concerned about this very issue.
But you know what? That too, has been just fine. There is this thing they invented called a bottle? Have you heard of that? And Lily, bless her heart, is still pumping, still bringing me those bags of holy mother's milk. And when there's not enough of that, I make him formula and he is thriving! He knows that he gets titty from Mama and no one else and that is part of the bond he has with his mother which he can have with no one else.

But you know what? Even without having the tit for him, I can tell that Owen loves me. Or, at least seems to be really happy when he sees me. If he does love me, it's because I so obviously love him and so obviously think he's grand. He can tell I think that. Of that I have no doubt. And the thing about being a grandparent is that the child doesn't HAVE to love you. You are not mama, you are not papa. You are this other person and the baby's life does not depend on you.
And okay, sure, I do everything in the world to make him happy every moment we're together to the point where Mr. Moon is deadly afraid that when he's old enough to ask for things, I 'm going to spend all of our retirement funds on Fischer Price stuff.
When he was telling me this the other day I said, "Really? And who's going to be buying him cars before he can even drive?"
Mr. Moon ducked his head and said, "Me."

And we laughed because you know what? It's just simply fucking GRAND! ALL of it! And in fact, if I were Queen of the Universe, I would rename grandchildren to call them Grandloves. And that's what they could call grandparents, too.
Grandloves.
Because it is all just so grand in every bit of the slightly old-fashioned, formal usage of the word, this relationship that begins to form when your son or your daughter has a child of his or her own and lets you hold them for the first time.

And isn't that wonderful? The fact that there are people who love you so much they would die for you and they're not even your parents? That after all those years of raising their own babies they want nothing more than to change your poopy diaper because they think you're so damn cute?

Yeah. It's gotta be brain chemistry.