He Is A Beautiful Boy 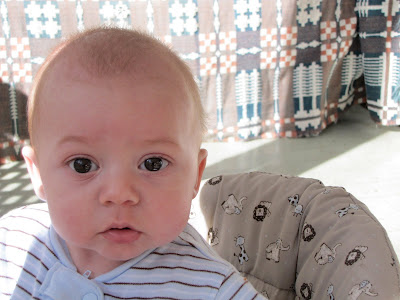 It was baby-world for me today. I had Owen for a few hours this morning after the Great Bat Escapade and Lily couldn't wait to show me his new trick. He can sit up. Sort of. He wobbles and leans but he is getting there. 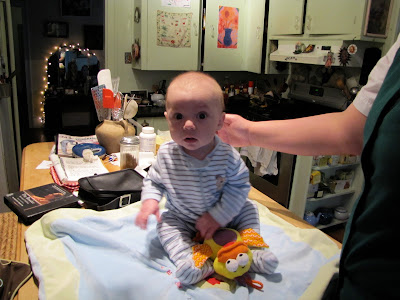 So many muscles it takes to sit up straight! So much that boy has learned and accomplished in four months. And the amazing thing is- we all do this! I did it, you did it, your children do it and yet, even though that's what people do when they are babies, each and every new accomplishment is reason for celebration. As Lily said when Owen got those first two teeth, "I had nothing to do with it but I sure am proud." I had even less to do with it, but I was still proud too.

Owen was in a good mood today. We giggled and played and went to the post office and looked at the chickens and had happy-baby-time when I changed his diaper. Owen loves nothing more than having you right there in his face, chuckling and tickling, running his legs and making him patty-cake by holding his little arms. Actually, his not-so-little arms. The boy is beginning to chunk out. He is STURDY! And so strong. He is four-months old. He is not an infant by any means. He can scoot in his walker and today I had to remove some dried palm fronds because he got to them and began to pull them out of their vase.

And as we all know, life will never be the same.

I am thinking I might have to buy a vacuum cleaner, which hurts my heart. Or perhaps I just need to sweep and mop more. I don't know. No matter what, the black dirt of Lloyd is going to make its way into my grandson's clothes and skin as yet another child crawls across the wide pine boards of these floors. If you put him on his belly, he desperately wants to move. He can get his butt up in the air and he can get his head up in the air, but not both at the same time. He will figure it out soon, though. This is a boy who wants to GO!

I took Owen back to his mama in the early afternoon as she was only working a short day. And I stayed because Billy was going to bring Waylon over for Lily to take care of for a few hours until Shayla got off work. Shayla has recently had to go back to school teaching which, up until Waylon was born, was the main reason that woman got up in the morning. She is THAT teacher. The one who changed your life. She works at school where the population is mostly what we might politically and correctly call something politically correct but which are, in fact, poor kids who may or may not have one parent raising them, and hardly any of them have two. And then when she had Waylon, every bit of that maternal, nurturing heart of hers turned inside out and she became one of those mothers who can't bear to be as far away as the next room from her baby. So going back to work has been devastatingly hard for her but the simple fact of the matter is, they cannot live on Billy's salary alone and so...
Back to work she has gone.
And it is killing her.

So anyway, Billy dropped off Waylon, taking him out of his car seat where he was sleeping to snuggle him before he left to go to his work, because he is one of those daddies who lives and breathes his baby and then Lily and I had such fun with those two boys. I held Waylon and Lily held Owen and Owen was almost desperate to get his hands on Waylon. He looked like a zombie, his little arms stretched out in front of him to touch Waylon, to see what he felt like, to rip his face off. I often feel like Owen wants to rip MY face off the way he grabs and pulls on my mouth, his fingers hooked into it. Oh. It was a fun baby-time with those two boys whom I love. Waylon laughed at me and talked to me and when he got fussy I gave him a bottle of his mama's milk, snuggled down next to me and I felt like I'd been given another gift, his big eyes studying my face while Lily nursed Owen.

When Shayla got to the house after work he was asleep in the swing. "Go ahead," I told her. "Pick him up. He's your baby." And she did, holding him close to her and I almost cried at the way she looked as she held him. Like a mama welcoming her Marine back from Iraq, like a mama holding the child she had missed all day so much that she thought she'd die.

Waylon is fine but I am worried about Shayla. Lily was the same way when she had to go back to work. She knew that her son would be okay in my care, in his daddy's care, but that wasn't the issue. The issue was- would the mama survive?

And so far, Lily has survived just fine. She leaves her boy with me and she knows he's going to be all right. "Have fun with your crazy chicken grandmaw," she says as leaves. And she's okay. And every day I tell her, "Thank-you for trusting your boy with me."
And every day, I mean that.
Every day I see him growing. Fatter, stronger, funnier, and more beautiful. I SEE that. I am her eyes when she is not there. I am her arms when she can not hold him. I am her mother and I love her son in ways that are as mysterious and important as anything on earth.

And I want that for Shayla, too. That peace which comes from knowing that her son is being loved and seen for who and what he is while she is earning a living. While she is tending to other children with her great, giant, loving heart.

All babies deserve this. Your babies, my babies, their babies.

To be held and loved and comforted and encouraged and laughed at and talked to and nurtured. And I am so grateful to be a part of Owen's life and be that for him. And for Waylon's, too, when I can.

"Do you know how much I love you?" I tell my boy when I change his diaper. And then he pees on me and I laugh and when I wash his diapers I am in complete and utter disbelief that yes, again, I am washing baby pee-pee diapers. My hands and fingers know how to put those diapers on like you wouldn't believe. Diaper-changing is a dance my hands know how to do. I imagine that on my dying bed, you could hand me a baby and my old, arthritic hands would know how to fold and wrap the diaper around that baby and would know how to tickle his tummy and make him laugh.

And I would laugh too. And I hope that Lily and Shayla know how much joy their babies bring me. How every time their babies smile at me, my heart beats with contentment. 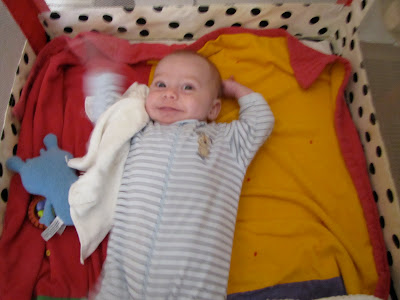 I can't think of anything I'd rather be.

Thank-you, Lily. Thank-you, Shayla. You loving mamas who have given this old mama something to do with her dancing hands. Babies to love with her beating heart.