Tropical Storm Fay, Where Are You Today? 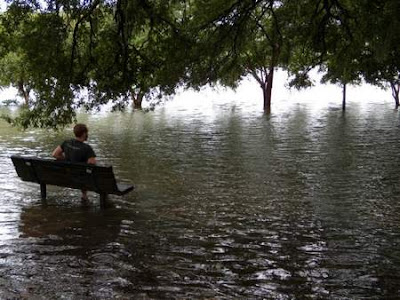 Well, the sun is actually shining, the rooster next door is crowing his red little heart out and the crickets are taking it to church. It's eleven o'clock on a Monday morning and the sound of the generator is no longer heard across the land but I can hear a chain saw and I expect I'll be hearing more of that as the day goes on.
That was some weekend. It had its ups and downs, I have to say.
We went to bed fairly early on Friday night with the storm starting to settle in with some pretty good gusty wind and rain. The electricity went off around eleven thirty and we knew what that meant which was: WE SHOULD HAVE FIXED THE GENERATOR!
Oh boy.
We slept through the night, got up and I made a huge breakfast because I knew things were going to go bad in the refrigerator before it was all over and more importantly- what else did I have to do? Raining outside, no paper, no internet. Just hungry people and worried dogs. Jessie had spent the night but she was eager to get back to town to get ready for school and do more settling into her apartment. When things seemed to have settled down some, she packed up the car and took off, leaving me in a state of near-panic until she called to say she'd made it just fine.
Since the rain had slacked off some, Mr. Moon and I decided to go take a little walk and it felt great to get out of the house, even if we were the only people in Lloyd who were deliberately outside in the wet. I wanted to see how full the little sinkhole where I walk was and what we found was a rushing waterfall across a road into it with a current so strong I didn't want to cross it. I was, quite frankly, amazed.
The rain picked up but we were already drenched so we walked up to the bridge over a part of Lloyd Creek. The water was high but the amazing thing was the sound of the frogs who live in the swamps on both side of the creek. They were screaming in fits of what I can only assume was sexual frenzy. A few were hopping across the road, in search of more fetching partners, I guess, and although I could not see the activity going on in the swamp, I imagined millions of small, gray slick frogs in an orgy of egg-laying and fertilization, the likes of which has not been seen since the Woodstock festival back in 1969. It was a frightening visual image and one I fought all night long as every time I awoke I could hear the continued roaring of ecstatic amphibians.
By the time we got home from our walk, the rain was pouring down harder than I'd ever seen it in my life and I have seen some rain. Around five there was a radio alert that a tornado had formed about five miles south of here and was heading north. This was not good news.
Mr. Moon and I sat on the back porch and watched the torrential rains and kept our eyes on the tops of the trees to watch for any tornado-like movement and to listen for the sound of a train.
We did not hear one and after about an hour, we figured we were safe and proceeded to drink and play cards and grill meat with the vast relief that only escaping death can bring.
By Sunday morning most of the storm had passed although we got a few more rain bands which brought the total of rainfall up to over twenty-something inches. We kept dumping the rain gauge but it kept overfilling so I'm not sure what it really was. It was a lot.
The local creek is not a creek anymore but a lake with tributaries of rivers that at the peak flowed over the railroad trestle and flooded the road. My neighbor across the street who has lived here in Lloyd for most of life said he'd never seen anything like it and his mother, who has lived here since she was a child and who is over eighty, agreed. The post office flooded and lots of trees, hydrated beyond tolerance, gave up the fight with gravity and toppled over, many of them taking electric lines with them. Hundreds of miles of roads in this county were not passable and I figured it would be a miracle if we got our power back on in a week.
But, the miracle occurred and it did come back on yesterday in the early evening and so now, I suppose, life will return to normal, whatever the hell that is.
I thought a lot about the folks who lived in this house all the years before electricity and I caught myself thinking smugly several times that I, too, could do that, but of course the difference being that I had running water, indoor plumbing, a phone line (and why do the phone lines never seem to go out?), a gas stove, ice, and ice chests. Not to mention a car to get in and drive to a store or a restaurant or even a motel if it all just got too hard.
So I remain in awe of those people who were hardier and more determined than I'll ever be and again, I have to thank them for building a house that that has remained solid and strong for all these years.
And it is time to get that generator fixed because life does go on and so does hurricane season and although we were more than lucky this time, we were reminded quite graphically that we need to keep our guard up, our batteries stocked, and the option of having a fan at night should this all happen again.
Posted by Ms. Moon at 11:09 AM