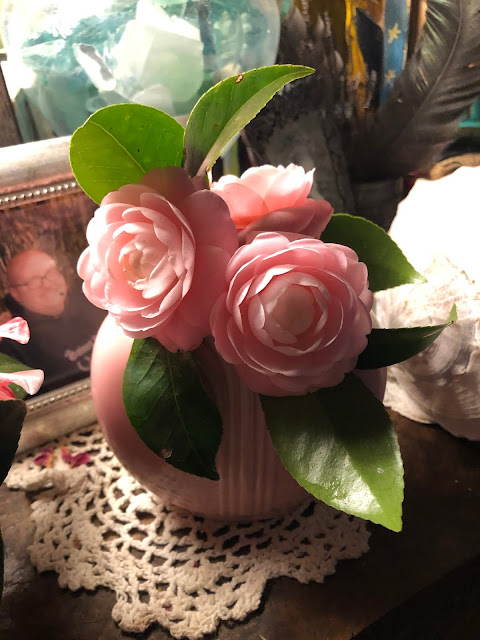 Remember how I was saying that I am not going to complain about the chillier weather?
Well I need to back up on that. It's been cold all day and I'm not even going to add "for us" because it's just cold and I don't care what the thermometer says. I swear it looks and feels like it's going to snow although I am sure that it's not going to. Supposed to hit freezing tonight but the sun should be back out tomorrow. It's been like living with a cold zinc bucket over our heads all day. Damp, cold, and windy too. How do you people who live up north do this?

So it's already February. Jeez. I'm still waiting for this China Flu to magically disappear. Come on! This hoax is no joke anymore. Speaking of jokes, it cracks me up so much that Trump's defense team all quit on him. I mean- when you can't even PAY people to defend you, you need to check your lifestyle. Or something.

We'll be getting our second vaccines on Thursday. I have a friend who is a few days ahead of us on the injection schedule and she has reported that the second one was a bugger for her. Fever, horrible chills, headache, extreme fatigue. But the first one was a little harder for her than it was for us so she may just have extreme reactions. I feel bad for her and I'm wondering what it will be like for us. Any of y'all know anyone who's gotten their second one?
I am not having the emotional response to the vaccine that a lot of people seem to be having. The feeling of relief, mainly. I'm not sure why. Is it because I never really felt as if I was going to get it and so this doesn't change much? I suppose that could be it but I still have dreams where there are many people gathered without masks and I don't realize it until after I've been around them which seems to indicate that I may be more concerned than I think I am. But there is still the possibility that I could infect others if I am unwittingly carrying the virus about which I understand can happen if I am exposed so mask-wearing will continue. But will I be able to hug and kiss and love on Owen and Gibson and Magnolia and Lily? Strictly speaking, I probably shouldn't but I imagine I will. I will still worry.
And maybe I've enjoyed having an excuse not to go anywhere unless it's absolutely necessary. Okay, no maybe about it. I have. As I've said before, except for family gatherings and thrift shopping, I don't miss much. And now I'll feel more able to go to Goodwill or whatever else is open in that venue. But I probably won't go to Target. Funny how I never seemed to be able to go in that place without spending at least a hundred bucks and now it's been over a year since I was there and I really can't think of anything they have that I need.
It's all so strange. I've been so content staying at home. 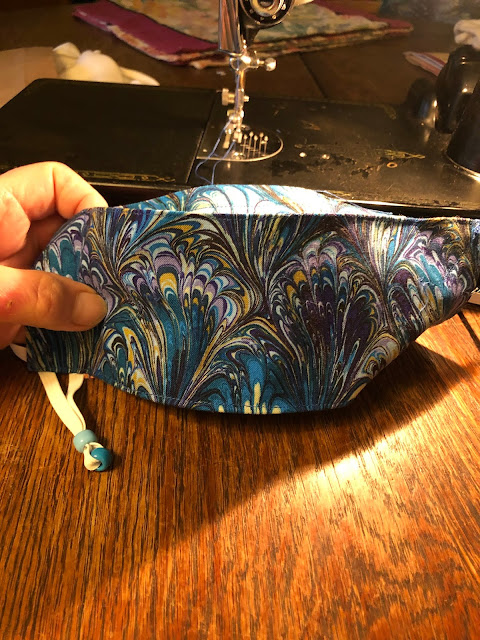 The newest mask. Not as pretty as the one I made the other day but an infinitely better fit. I surely do enjoy sitting and sewing on a cold, gray day. 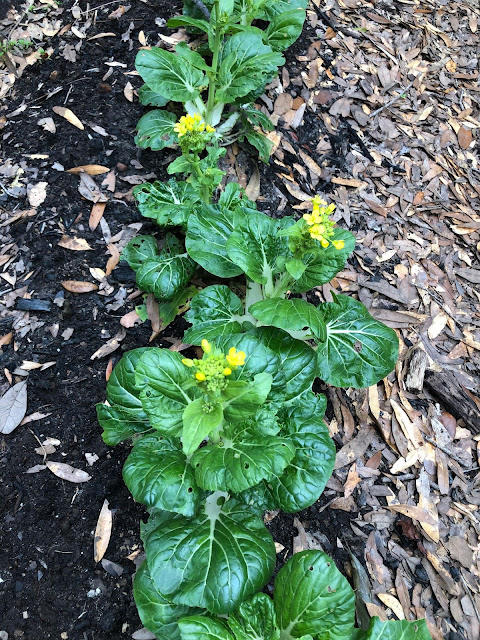 The bok choy is bolting and I do not understand why. It hasn't been that warm. But those pretty little yellow flowers mean the plants are literally going to seed.
Still, there is much beautiful green goodness to be picked for salads. 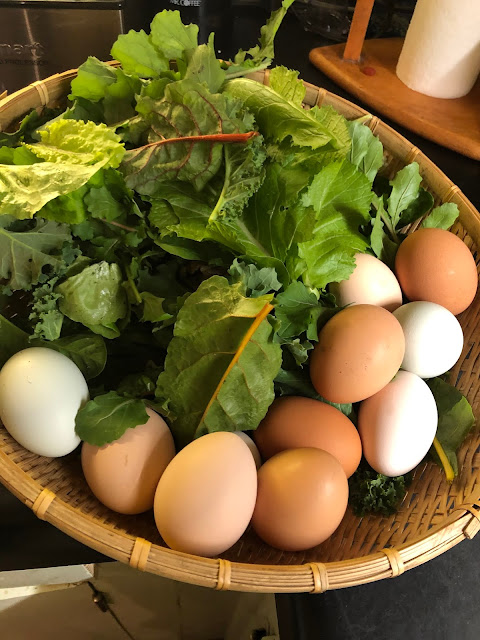 And eggs. Always eggs. I've gotten two tiny eggs recently (see the one there in about the 3:00 position? pale ivory?) and I am thinking that little Miss Violet must be laying again for some reason. She went broody at least once. I wonder if her tiny banty body has awakened to the possibility of babies with spring coming. She's pretty old. Definitely the oldest chicken I have.
If you are spending a lot of time at home these days have you noticed any changes in your dreams? I'm asking because mine are becoming more and more cinematic, even to the point that as I am in them, very much a part of them, I am also aware that I am acting. A movie is in fact being made. Very odd and hard to explain. Do I just miss acting or is my brain entertaining itself as I sleep, out of desperation for more creative outlets?
I sure have a lot of questions today, don't I?
Thanks for being part of whatever creative outlet I still have. I cherish you.
Love...Ms. Moon
Posted by Ms. Moon at 6:14 PM