All The Usual Suspects 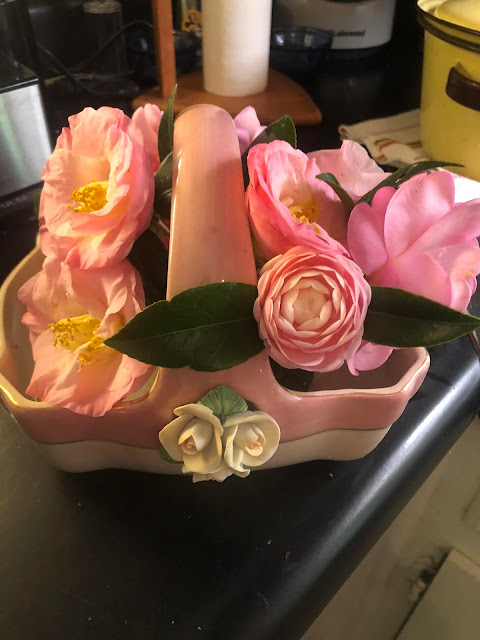 I have a glass-front cabinet in my kitchen where I store bowls and platters and relish trays and fancy glassware and, well...stuff that I have no other place for. There is truly no rhyme or reason to any of it and one of these days everything in it is going to come crashing down because it's all set very precariously and honestly I forget that I have half the stuff that's in there. But the other day that ceramic basket caught my eye and although I have no memory of where I got it I do remember the handle breaking and me gluing it back together at one point. It's sweet, but really- of what use is it? It occurred to me that I could put a florist frog in it and use it for camellias which are sometimes difficult to vase because they are so top heavy with such slender stems. So this afternoon while I was baking banana bread I went out to cover my plants because we're about to get two nights of freezing temperatures and then picked some camellias, brought them in and tried out my idea.
I think it's about the prettiest, girliest thing I've ever done. It's ridiculously precious. And I love it.

I have an apology to make. I feel so stupid for having complained about the cold here yesterday when some of y'all are getting so much snow that no one can even get out of their homes. Now that's cold. And I am certain there is a degree of being miserable involved in that scenario which I have never, nor will ever, experience. Yes, I did live in Denver for two winters but in the middle of the second one, I packed up and headed south.
Which turned out to be a good thing all the way around because the guy I was living with got busted for dealing about a week later.
Phew!
Yes. I was a wild child. Also, a very depressed and sad and confused child but I pulled it together enough to leave the situation and I've never again had the inclination to move to parts further north.
Anyway, yes, it was very cold here FOR US yesterday but it was nothing on the scale of how cold it can be. Mostly I think it was just the blustery wind and the dampness that caused it to be so uncomfortable. Today has been gloriously sunny although still chilly and as I said, we're going to get down into the low thirties for a few nights.
But I was being ridiculous and I'm sorry.

It's been a nice day. Hank and Rachel came out for a little porch visit and we laughed and chatted and then a little while later Lily came out to drop off some potatoes to plant, along with a packet of sugar snap peas. We're supposed to have those in the ground by Valentine's Day. We shall see. Lily was going to bring the children but something came up and they didn't come. Still, it was nice to just sit and talk with Lily. In between the comings and goings and baking and flower picking I managed to almost complete a new mask for Mr. Moon. He wanted one like I made yesterday in black and I used some scraps of black silk that I'd bought many years ago to make him some drawstring pants, along with a layer of cotton so it has three layers all together and I think he will like it.

And for the thirteenth day in a row, I have woken up in a country which does not have Donald Trump for a president and that alone is reason to feel cheerful. Oh, the hours and days I spent checking the news to see if:
A. He had died, or
B. He had gotten us into a war, or
C. He had done something so horrendous that he had been arrested, or
D. All of the above or some combination thereof.

What a relief it is.

Here's a sticker Hank left me. 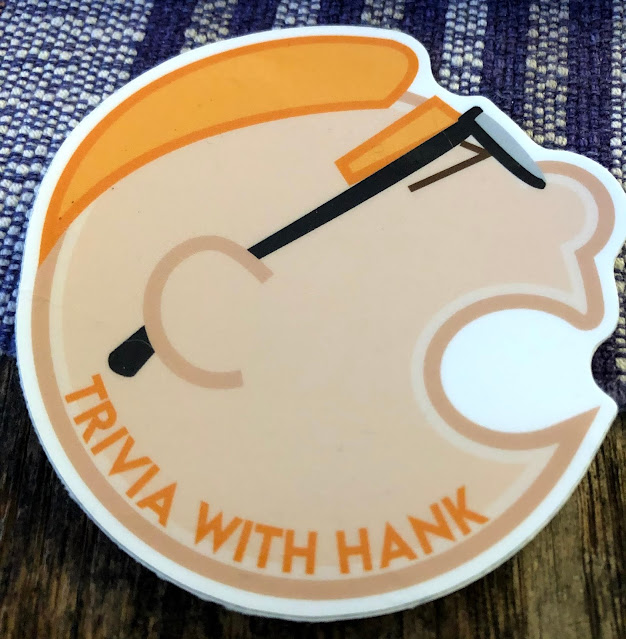 The guy's not bad at graphic arts, is he?
And one more camellia picture. 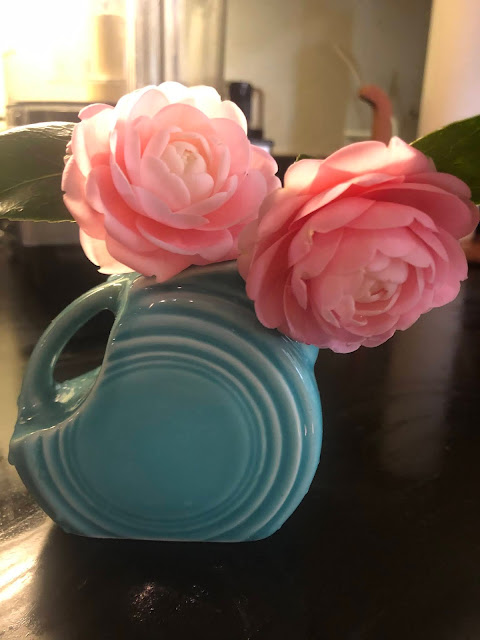