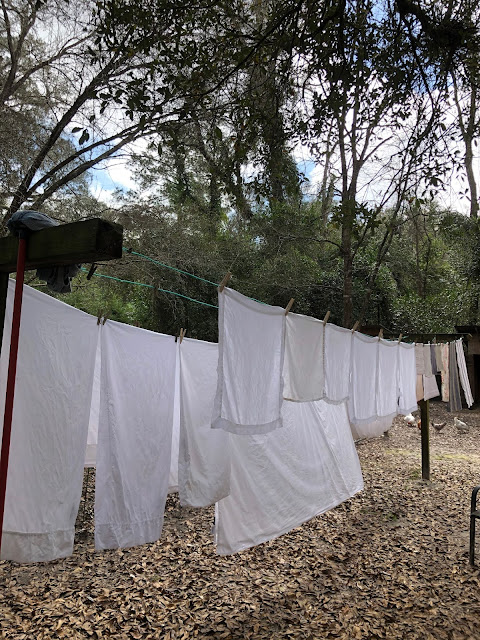 It was foggy this morning when I got up but by the time I hung the second load of clothes on the line, the sun had burned it all off and was shining prettily. Not sure that we haven't just skipped spring here and are diving headfirst directly into summer.
Nah. That's not true. It didn't get over eighty here today.

So remember that thing that Lon said about being satisfied with getting one thing accomplished in a day? Well I got two things accomplished today and I feel downright sassy about it. I finally got the hen house depooped and put fresh hay down for the girlies and their gentlemen friends and I attacked the front porch where the plants have been all grouped up against the wall so that I could cover them when we have freezes. It was a damn mess. And if we get another freeze I'm going to throw up my hands in despair and kick my own ass for rushing it.
But it sure does feel good.
I had to move things around and deciding which plant goes where is 95% of the battle. And none of these are small plants. I just slide them and even that isn't easy. I cut a lot of things back and did some trimming. I'd bought a farm-sized jug of Miracle Gro at the Costco a few weeks ago and I gave them all a good sprinkle with that and then I watered them. I moved my banyan tree out of the house and repotted it and got it situated. I'm not sure that some things are going to come back. A few begonias (which I have to keep up off the porch floor because the chickens love to eat them) and my ferns all look horrible. Mr. Moon moved my Norfolk Island Pine off the porch and into the yard. I'm going to plant it in the ground. I bought it when it was tiny to use as a Christmas tree and I did use it for that purpose for years but now it's too big and heavy to move around easily and I don't especially want a potted Norfolk Island Pine. If it grows, it grows, if it doesn't- oh well. I bought another tiny one last year and it's still alive.

Here's what the porch looks like from the east end of it. 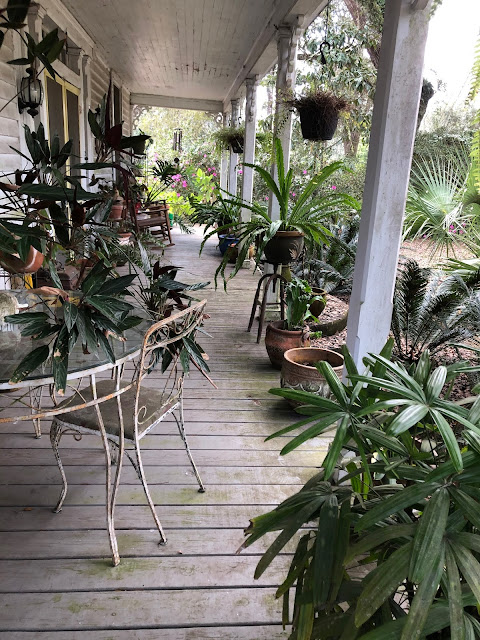 Some of the pots that appear empty really aren't and I'm just going to wait and see if life springs forth from the dead-looking roots.
Here's what the west end of the porch looks like with the sun lowering behind it. 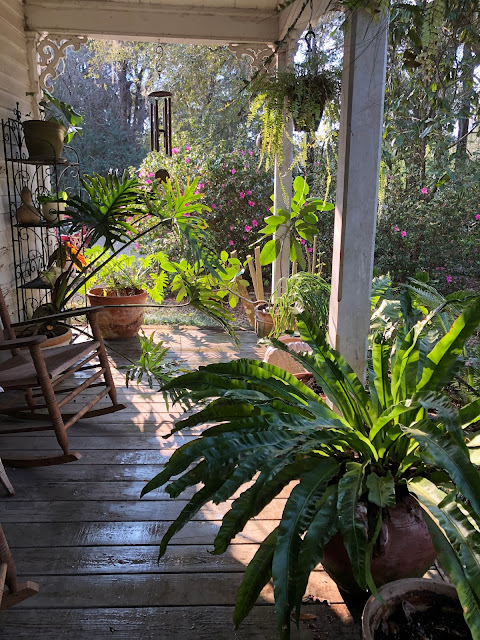 Can you see the azaleas coming out?
I don't really have everything where I want it but some of those pots are too heavy to even drag from one end of the porch to another. Mr. Moon would move them for me but he doesn't really need to be lifting that sort of weight either.
So I did all that, and tomorrow I might continue on with more work in the front yard, trimming and pruning and pulling weeds. The sago palms need a lot of attention. It's a literal pain to trim those because they're extremely stickery and their little needles contain a sort of toxin so that's a job that must be done carefully. It's always fun to watch their new yearly growth appear. The firespike needs trimming badly. The black sticks that were last year's beautiful leaves and blossoms have to go. And I should probably trim a little bit on the Canary Island date palms and if I do, I will surely complain here as I do every year about them and their horrible fronds made of needles even sharper and more toxic than the sagos.
I have put my first loaf of sourdough in the new oven and I am, as I texted to a friend, inappropriately excited about this. 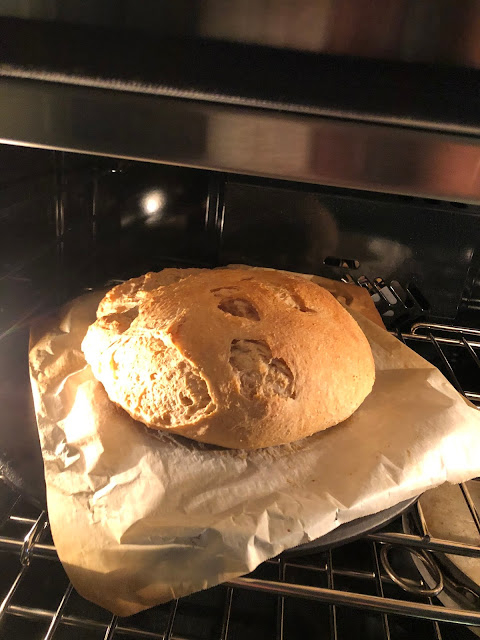 It's a funky loaf and I'm not sure what I did to make it so. Each time I make sourdough, it turns out differently. I guess this one just got away from me on the rising. I'm sure that Paul Hollywood could tell me and he'd take a vicious pleasure in doing so but I would be so enchanted by those blue eyes of his that I wouldn't mind at all.
The laundry has been folded and put away, the bed is made up with those nice line-dried sheets. I am tired but in a good way. My ribs ache a bit where I broke them but not very much. I imagine they will remind me of their presence for the rest of my life. I doubt I will ever forget that fall I took, the way I immediately knew that I'd done something rather serious to my body, the way the ribs felt...crunchy? I still don't understand how they knitted themselves back together and when they ache it's mostly that I think about- how in the world does the body heal itself from such a rude and sudden insult?
A Friday night. My husband needs to come on into the house. He's been working on a car's brakes all day long. "I don't know why I get so tired," he told me earlier.
"Haha!" I said. "I do."
But he needs to stop and make us martinis. It's that time again. And I will make him supper.
Happy Friday, y'all.
Love...Ms. Moon