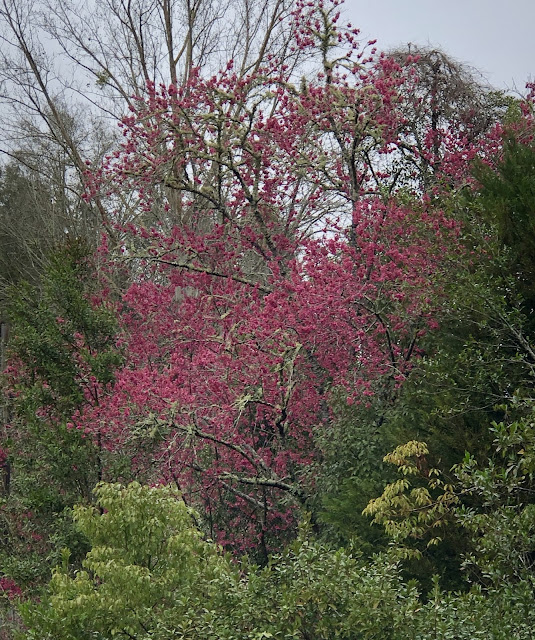 When I went out for a walk today, I realized that this large redbud tree which is always one of the first of its kind to bloom around here, is in full glorious flowering. Even against the gray sky it was luminous.

Mr. Moon took off for Houston before I ever walked out the door and I swear, he was trembling with the anticipation of his adventure. I made him some breakfast burritos and kissed him good-bye and told him to come home to me safely and by golly, to stop and get a room and get real sleep and that I love him and all those things you tell a loved one when they take off on a journey. As if our words held magical spells of protection within them. He had a cooler full of things like pimento cheese and a container of chili to heat up somewhere with a microwave and he had crackers and granola bars and apples and nuts. And coffee. Lots of coffee.
I spoke to him a little while ago and he sounded fine and cheerful, just heading down I-10. "It's boring," he said. "There's hardly a curve in it."

And I've had a good day. It's been hard to peel me away from listening to the impeachment trial. I've done that as I've walked and taken trash, swept and mopped floors, washed rugs and towels and other laundry. It's so unbelievable how close the rioters came to the lawmakers certifying the votes in the Capitol. Unbelievable and terrifying. It seems to me that the house managers are presenting a case that is so undeniably true with real-time quotes from Trump and video from the rioters themselves that the idea of anyone voting not to convict him seems ludicrous. It's a damn miracle that Pelosi and Pence are still alive. The evidence that Trump instigated the whole thing is irrefutable. That he knew in advance what was going to happen. That he, in fact, called for it to happen and was thrilled when it did.
What I wonder is how in the world the Capitol security was so taken by surprise. How they had not been prepared in the least for something that was hardly kept quiet in the planning.

I've listened to all the testimony I could and although it appears that there will not be enough votes to convict, I have to believe that those who vote against it are as much to blame as Trump himself. As the rioters themselves.
There will be blood on their hands and they will go down in history as traitors.

Here are some narcissi whose picture I also took on my walk. 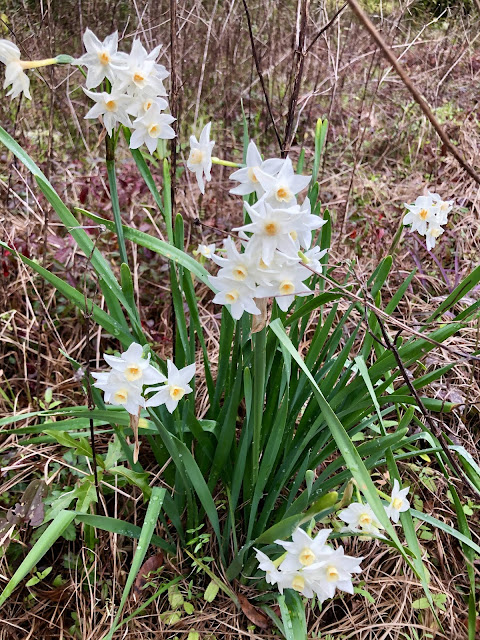 My PlantSnap app tells me that the variety here is known as Chinese Sacred Lily. Isn't that beautiful?
I walked straight west down Old Lloyd Road today. No sign of my neighbor out front so the coast was clear. I saw No Man Lord but he was hunched over his Bible, possibly asleep and I did not try to disturb him. A house has burned down and how I didn't realize this when it happened is beyond me. It's not very far from my house. Closer than No Man Lord's place. It was an old wooden house, leaning a bit from age but someone did live there, I think. I am not sure. It's a pile of ashes and burnt boards now and I pray that no one was in the house when it caught fire. The Buddha statue which was always in front of it is still there but the stuffed toy dog who sat on Buddha's lap is gone. A line of plastic chairs delineates the yard border and the pen which used to hold a hog is empty. Perhaps no one did live there. It was in bad shape and I only saw a person there infrequently. We traded waves and I moved on.
There are so many stories in this world, in this life. Even Lloyd, quiet as it is, has hundreds, I am sure. Thousands, if you go back in time. 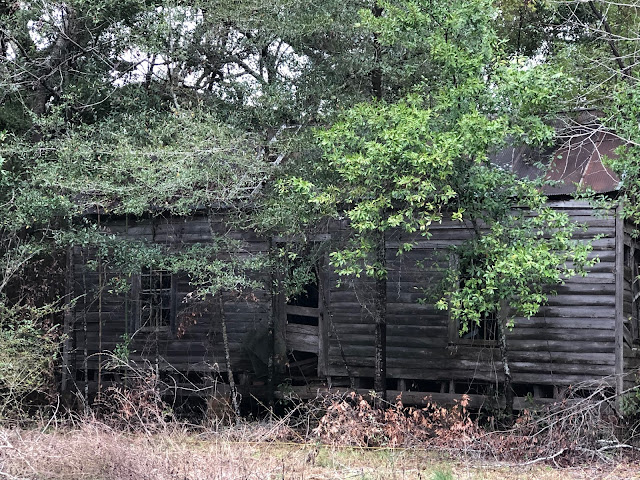 This is not the fally-down house but it is an old house that is slowly losing its struggle with age, with gravity. Who knows how many stories it alone has witnessed?
Not me.
And my story continues in this even older house which has seen more than I can imagine, held more lives within it than I can know. Right now it is filled with light and camellias, and smells of vinegar and Fabuloso, while a load of bleached things are tumbling in the dryer. Tonight I will sleep alone except for a cat. Hopefully. Probably this one. 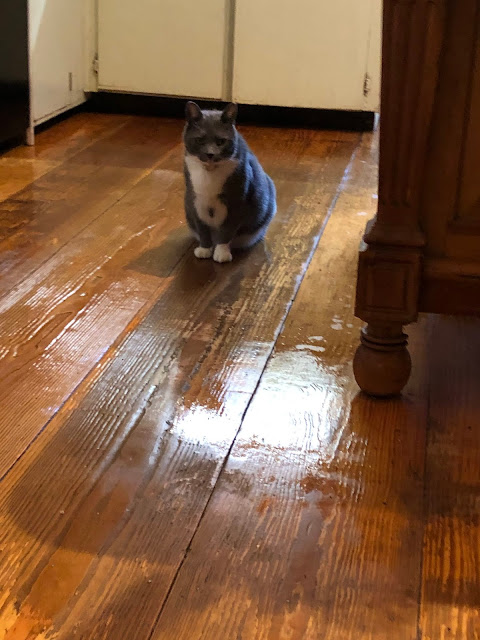 I feel as though he was judging my mopping efforts. He probably was. Who could be more judgmental than a cat? As if they ever do anything more than adorn a bed, a couch, a chair as they sleep.
And yet, my life would be so much poorer and lonelier without them.
And my chickens.
And now it's time to go shut the door on the hen house so that the dears will be safe as they sleep.
You be safe too, okay?
Love...Ms. Moon
Posted by Ms. Moon at 6:56 PM