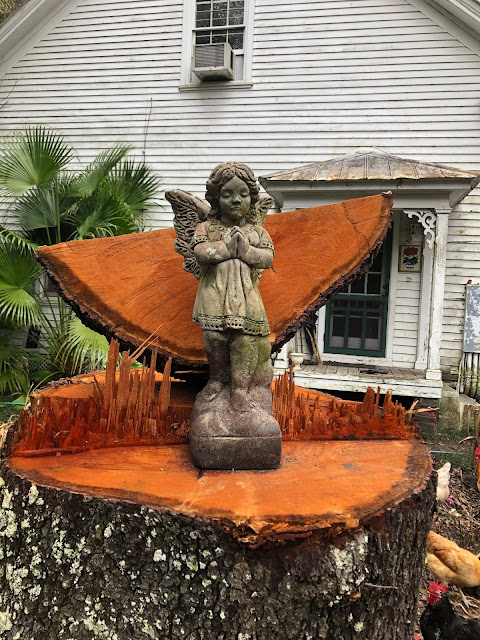 Remember when we got the old cherry laurel cut down a few months ago? Well, the very tall stump is still standing and Mr. Moon recently put that wedge piece up on top of it and then a few days ago he added that little angel statue which came with the house but took me quite awhile to find as it was covered in weeds. I sort of like the look but our friend Tom keeps saying, "Y'all gotta figure out a way to grind that stump down."
I suppose he's right although I could just plant some jasmine or something on it and in about fifty years it'll all be gone.
I will be too but that's another story.

We're back to the wet cold today. I'm glad to have clean (albeit generally holey) cashmere. It's been raining on and off since last night and that's made a good day for me to allow myself to be lazy and I have been. No baking, just a little laundry,  a little sweeping, a little nap. I sat on the couch and worked on August's blanket and watched Crip Camp on Netflix which I've been "meaning" to watch since it came out and I'm sorry it took me so long. What a film! It was executive-produced by Barack and Michelle Obama and although I didn't think it was possible, I love them even more now. For those of you who don't know, it's the story of a group of disabled kids who attended a camp in the Catskills in the seventies where the counselors were a diverse and loving band of hippies who treated the campers like the "real" (what a stupid description) people and individuals they were. Out of this group of people who had tasted what it was like to live in a world of inclusion and possibilities, came a wave of advocates for the disabled who helped promote and push the Disability Rights Act to make the country more accessible to the individuals that society had been happy to keep at home, out of sight, and definitely out of mind.
Or in horrible warehouse-like hospitals where even basic care like feeding and hygiene was a unrealized dream.
I remember when I first came to Tallahassee and had no idea what I wanted to do with my life after quitting college, I volunteered for a little while at a local place like that. It was called the Sunland Center and to my shame, I was only able to go a few times.
It was more than I could bear. There were people there with disabilities so profound, both physical and mental, that I could not believe it. And the staff was overwhelmed, completely, by their ratio to patients. It was a shameful testimony to the brutality of humanity towards those who are different. According to this Wikipedia article, the hospital shut down in 1983. For years, the abandoned building was deemed haunted and I can only imagine that it was. Eventually, it was torn down and is now a luxury apartment complex.
I still wouldn't live there.
Later on, while I was in nursing school, I did a clinical at the Florida State Hospital in Chattahoochee, Florida, the infamous and still very much in business, facility for the mentally disabled and even in 1983, that was a sobering experience which taught me more about how our society views the disabled of all kinds, the differing of all kinds, than it did about treatment or care.

Believe me when I say that I will never forget the months I visited there. Not the sound of metal-barred doors clanging shut behind me and certainly not "my" patient- a woman named Sue who told me on the first day, "May-wee. I have pwoblems," after she jumped on my back and scared the crap out of me and who came to be someone who has been formative in my life as someone whose spirit I may have never seen the likes of.

So with that small amount of first-hand experience, I watched Crip Camp and I laughed and I was in awe and at the end I cried. Mr. Moon was watching it with me and he didn't hear something that someone had said and it took me a good few minutes to repeat it to him because I was just that close to bursting into sobs.
And I have to add that I don't care what people say or think about hippies these days- it was their philosophy of acceptance, recognition, and respect of all, despite differences of race, creed, gender, and even yes- abilities- that I think fomented the idea in this group of people that they deserved the rights that every other American had. The right to have access to education, society, sidewalks, public transportation, buildings, jobs, and families of their own. And so much more.

Okay, okay. Yes. I was a hippie. I will die a hippie. And proud to be.

I have to say that our chicken potpie was delicious last night and I am looking forward to tonight's leftovers. As I told Lis today when I was talking to her, I can't believe it's taken me over sixty years to become proficient at pie dough but it has. The food processor is my friend. And of course, as I also told her- a shit ton of butter makes all the difference.

Live and learn, and keep on with it.