My Sweetheart Is Home 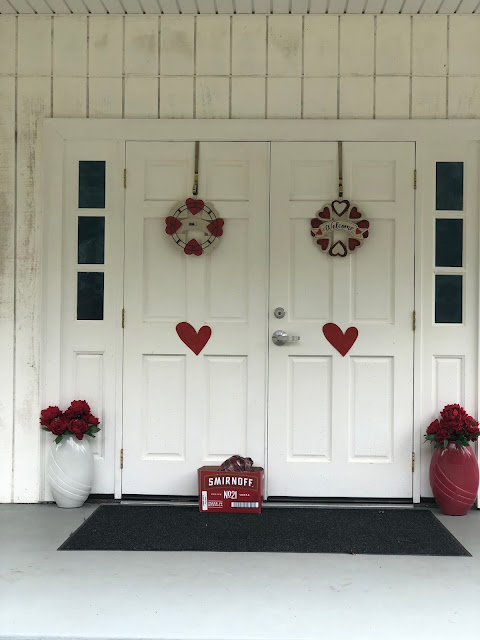 Well, it's Friday again. The sheets are clean, the bed is made, martini glasses are in the freezer and the man is home.
He made it! Camero in tow, he is well, I am glad.

The picture above is one I took on my walk today. I love the symmetry of the doors and flowers and hearts and wreaths and then that absolutely random Smirnoff box. It is color coordinated. Somebody dropped off something, I assume.
I did not want to take a walk AT ALL. I wasn't in the mood. It was humid and almost misting rain, it was warm again. But, I knew if I didn't I'd regret it all day and also, I wanted to drop off some eggs at No Man Lord's house. I have so many eggs right now and I think he probably appreciates them. I mean, he did ask me for some hens.
So I walked down there and left the eggs on a cinder block in his yard because there was no sign of him which was fine because he isn't a big talker. To me, at least. Then I walked down to the county line and on my way back, the eggs had moved, someone was unloading some things from a truck and another guy pulled up right as I was passing. There's a lot going on at No Man Lord's house some days. People bring him things and he sells them. Or uses them. Or whatever.

I talked over an hour to one of my oldest friends on the phone today. Oh, how we laughed! We've known each other since 6th grade and we've kept in touch all that time. It's a joy. She's a joy. She's been married to the same man even longer than I've been married and she has two grown children, three grandchildren. We have a lot to talk about. I love that woman.

For the rest of the day I just did little piddly stuff around here. I watered the plants inside. 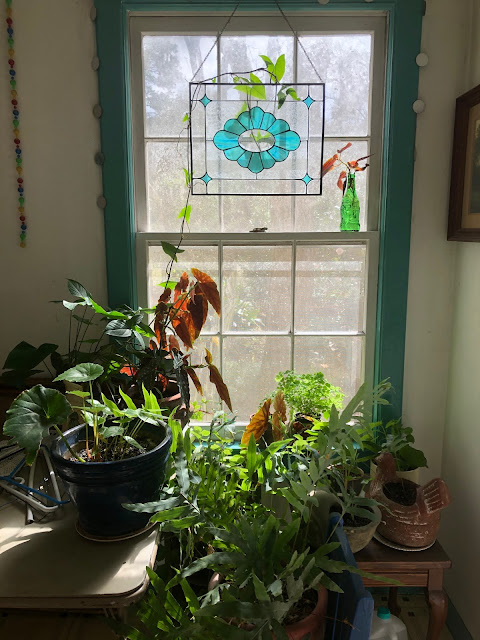 This is in the mudroom where I have a group of baby plants and plants too special for me to trust outside in the winter. That little nook cheers me every time I walk by it which is approximately forty-seven times a day. It's not only the mudroom but also now the laundry room so I spend time there.
The tea olive is blooming again and I am intoxicated every time I walk outside. 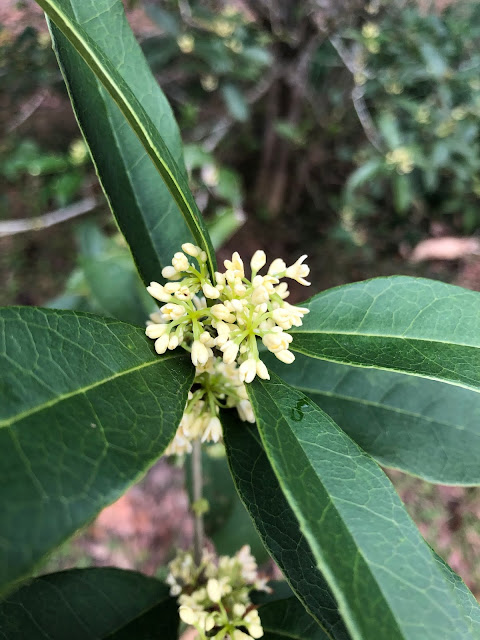 I've long since run out of words to describe their fragrance. Like apricots and heaven. That's as close as I can come to any sort of description and it does not do them justice.
I had a feeling that my trillium was probably up and look! 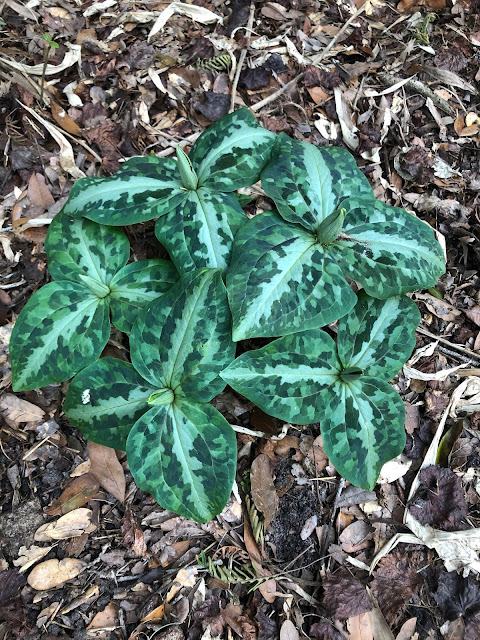 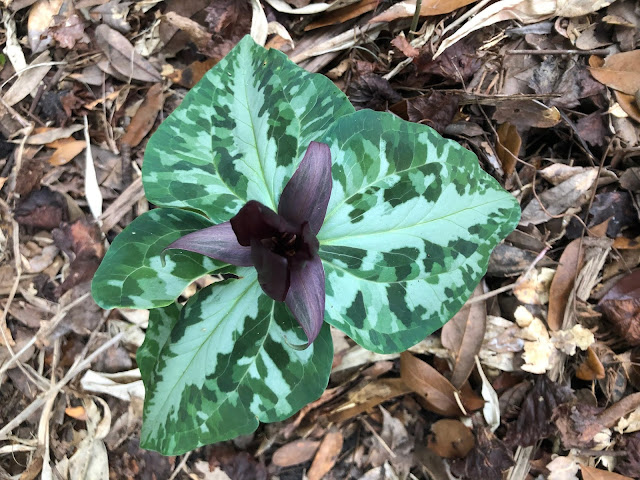 Those are plants that I am ever so glad that someone planted here.
Unlike most of the rest of them.
I wonder if I should try and separate those five at the top and spread the love around a little? I should research that. I'd hate to kill them.
My camellias are still going strong although the Pink Perfections are slowing way down. I remain completely enamored with picking them and putting them in vases. 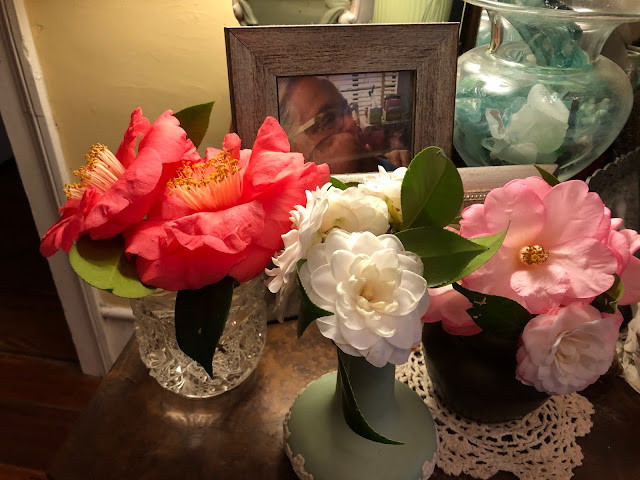 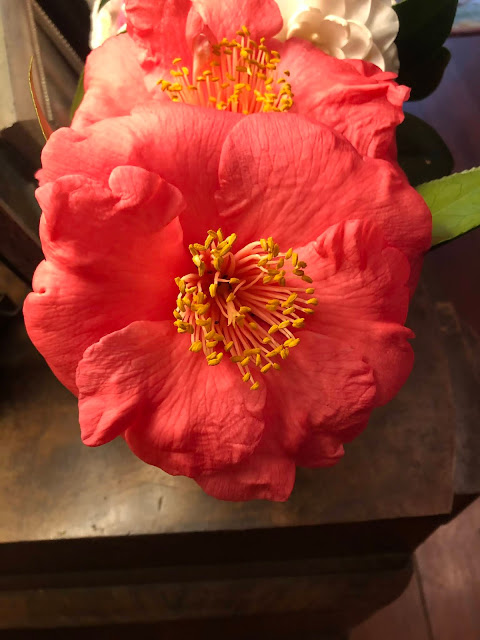 I have a memory of being at Posey's once which involves camellias. Such a tender memory. Posey's was a joint on the St. Mark's river which served oysters, boiled shrimp, smoked mullet, and beer. There was hot sauce, cocktail sauce, and saltine crackers. That was the menu. And it was hugely popular. The building it was in tilted and swayed and threatened to fall into the river but it drew crowds, especially on the weekends and you might find yourself sitting near FSU professors and students, local fisher folks, bikers, Tallahassee la-di-dahs, and well, people like me. Hippies. My ex-husband I used to go down there frequently when Hank and May were little and Mrs. Posey even crocheted them little shawls. The camellia memory comes from a time when Mr. Posey had cancer and the word had gotten out and it was known that he was going to die. So we had gone down there one weekday and there was hardly anyone there but us, and Mr. Posey came in with a huge armful of camellias. He so lovingly laid them out to show his wife, naming each one, his face illuminated with their beauty.
I will never forget that.
He did die soon thereafter. And Posey's got flooded and half washed away in a hurricane many years later and it's naught but a memory now.
I suppose I'll end here. Except for this. I just can't stop. 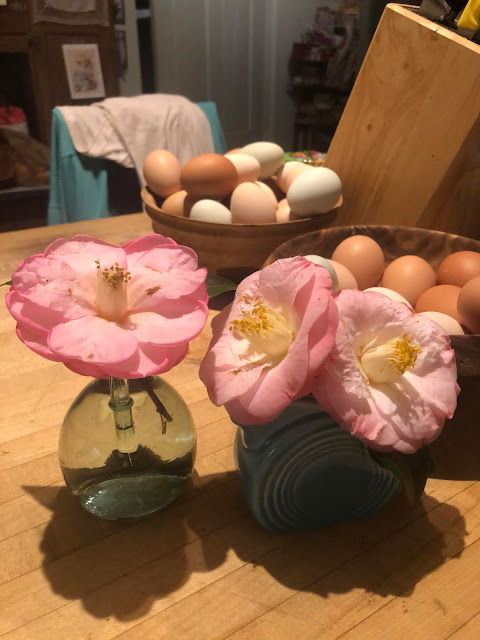