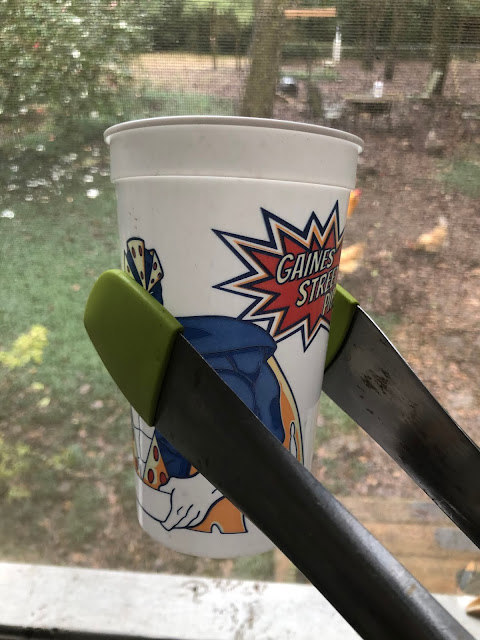 That, my friends, is how I get seeds into the bird feeder. Although those tongs are ludicrously long, I can still barely reach the platform where the seeds need to go with them. I bought those tongs because I wanted new tongs and they were marked down at Publix and I never would have chosen to buy such long tongs (Long Tongs would be a good band name, don't you think?) but I have used them to reach things on high shelves far more than I have used them for actual tonging purposes. My children and grandchildren laugh at me when I do this but I am used to being a source of amusement for them. I do have a step ladder but why bother with that when I can just reach for my handy long tongs and grab that oatmeal right off the shelf with them?

Needs must, as our beloved Brit friends say. Or at least Brit Lit would have me believe they do. Do y'all really say that? I hope so. It sounds so cheerful and self-reliant.

Yesterday I had so much energy and got so much done. I was amazed at the end of the day how good I felt after all the physical activity I'd done. The little health widget on my phone said that I had taken well over 10,000 steps and I believed it. I hardly stopped moving all day. I was about to google, "Does the covid vaccine make people feel great?" I felt years younger than I have been feeling lately.
It was wonderful!
So. You know what happened today.
I haven't felt bad or particularly tired but I sure haven't matched yesterday's activity level. The only walk I took was to the post office. I cleaned the hen house and put the poopy hay on some roses that never really bloom anyway. I noticed that the mulberry tree is getting the tiniest green tips on its branches. It will be busting out leaves before I know it. I finally attacked part of the little garden bed beside the kitchen where the bananas grow and where we got the cherry laurel cut down. In theory, I am going to make an herb and flower garden there, now that it will get more light. Of course there are things growing in the bed that are...invasive. Didn't see that coming, did you? I have two big patches of what may be turmeric growing and they just looked horrendous. I have no memory whatsoever of planting these things, whatever they are, and most of the leaves got frozen and turned brown and dry and I've been meaning to do something about them for quite awhile so today I got out my pruners and shovel and attacked one of the clots of them, listening to the impeachment trial via my phone and ear pods the whole time.
Now a lot of the things I do aren't really that strenuous. Trimming things, pulling weeds in the garden, cleaning out the hen house, planting vegetables. They're just basically leisurely acts that don't require a lot of physical strength or activity. But digging up thickly rooted plants is not in that category. I would dig for awhile and then get down on my knees and pull and yank and then get up and dig some more. The roots on this plant don't go down too far but they are dense and don't want to give up their dirt home. 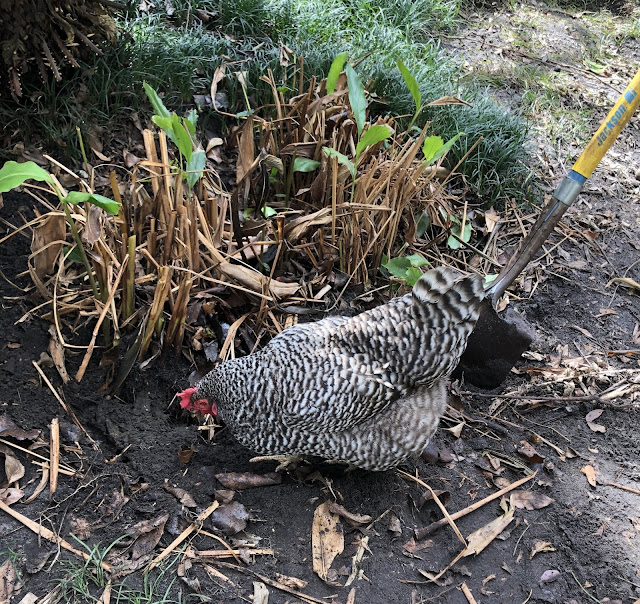 I had to take several breaks and here's Miss Alice scratching about to see what I've uncovered while I was taking one of them. I finally got that clump done, dumped the dead trimmings over beside the garage where we leave such things, and put the roots in bags to do something else with because if I put them anywhere near the ground, they'll just take root and take off and I'd have the same problem, just in a different place.
Don't ask me how I know this.
There's a whole other bunch of them over where the bananas are growing but I just couldn't face that today. I came in and took a shower and settled on the couch and tried to find something on Netflix to watch and after about half an hour of that (I wish that was hyperbole but it's not) I gave up.
I have changed clothes four times today. Again- no exaggeration. It was coolish when I got up and so I dressed for that. When I went to the post office I received a pair of overalls that I'd ordered from the Gap and I brought them home and tried them on and I have no idea whose body they were made for. Perhaps an orangutan's. However, because they make it almost impossible to send anything back and because they were on major sale, I just kept them on and changed to a tank top to work outside in. After my shower I changed into a different pair of overalls and a different tank top and now it is getting cooler and so I am wearing the original pair of overalls I put on this morning and a shirt with sleeves.
Do you do this? I know I do it because of the way the temperature here can vary from morning to afternoon to evening, especially this time of year, and because my activities vary as well. God knows I don't want to wear my GOOD overalls to do yard work in.
I just talked to Mr. Moon. He's on his way home but still in Louisiana and will stop for the night soon. It was good to talk to him and it will be even better to see him tomorrow. He has his Camaro and he's a happy man.
The frogs are screaming. I think I'm going to go make some risotto, just because I can. I believe I still have enough energy to do some intense stirring. Who knows? I may sleep until noon tomorrow.
I doubt it.
Love...Ms. Moon
Posted by Ms. Moon at 7:18 PM