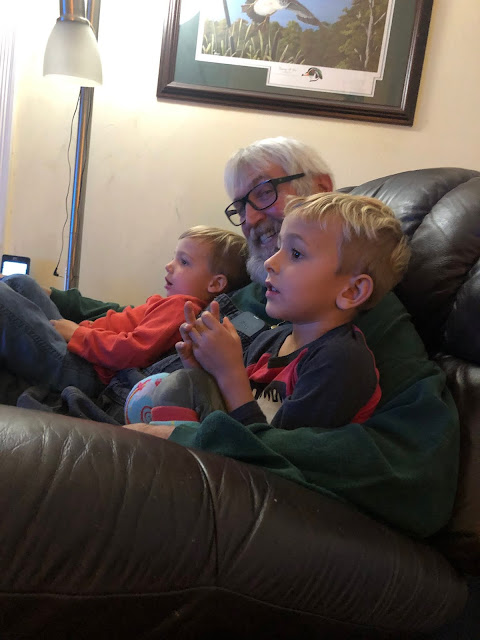 Today was another one of our drizzly, fish-belly gray days, not very chilly but what I suppose you could call "sodden" with the humidity. Jessie texted to see if she could bring the boys out one day this week and I texted back "Yes please! Today?"
And so she did.
The joy I feel when those little men burst in the door is as shiny as a brand new helium ballon floating on its string, my heart that light too. And then there is the goodness of hugging Jessie, of hearing the boys' voices, of watching and listening as they show us what they have brought in their backpacks. Today Levon brought his toy drill which has all sorts of attachments and goes in reverse too, to screw and unscrew a recalcitrant nut, a bolt, a screw. August's backpack was stuffed with My Little Pony's, which he adores, as well as his current favorite book that he got from the library and which his mother has told him she will not read to him ONE MORE TIME. It's a My Little Pony book and I did read it to him and Lord, I can understand why she's drawn a line. But it's very sweet and ends with hugging mother and father and baby unicorn ponies and you have to love that.
They did some playing with toys and then there was lunch and TV watching with Boppy which made them all so happy, especially Boppy, I think. Levon has become enamored with stroking his grandfather's beard which has reached Covid length. I got to chat with Jessie some and we talked about everything from marriage to being a mother to...oh, I don't know. Just talk. Are we not all starved for conversation?
One of the things we watched on television was an episode of "Shaun the Sheep" which really is a genius show. On this particular episode a mother sheep forgot to keep track of her baby which reminded me of a dream I had last night. It seems that in virtually all of my dreams, there is a baby which I live in fear of losing. This must be a universal worry- I even see it in chickens as the mother hens cluck all day long keeping their chicks informed as to where they are and the babies peep and peep and peep which lets the mama keep track of them. The baby in my dreams changes from dream to dream and I generally do not lose the child. That is not the essence of the dream. Not the main plot line. But the presence of a little one and the concern about them is a constant. I absolutely know that when I am very old, if I do achieve that number of years, I will be one of those old ladies who has a baby doll in her lap at all times. I have a friend who posts pictures of his beloved mother on FB and she is in an assisted living facility and she always has her baby with her. It seemed to me that no one wanted to comment on this as if it were embarrassing but I spoke up and said something about how I loved seeing those pictures. How happy she always looks with her baby. And he commented back that yes, she loves that doll and that it is so important to her.
I told Jessie today that I should probably just go ahead and pick out my baby now.
Because I am going to want one. I am going to need one. I have a feeling that I'll even be trying to nurse that baby. I can hear my frustrated aids now, saying, "Miss Mary, if you don't stop nursing that baby of yours, we're going to have to put a bra on you!"
My greatest nightmare- having to wear a bra in the nursing home.
So okay, that's not my greatest fear but Jesus hear me now- please don't make me wear a bra when I'm ancient. Are you listening, children?

So here's some news. Mr. Moon bought a car today. A 2015 Camaro. For himself. Which is fine.
But.
The car is in Houston.
The car has no motor.
He has three days to pick it up before they start charging him for storage.
Guess what my husband is doing as we speak?
Did you guess working on his trailer and truck?
Ding, ding, DING! You win the prize.
I will be quite honest with you. I do not always understand my husband. This is to be a project car that he already has a plan and a goal for along with a huge desire to work on, to restore, to...do whatever it is that men do with cars without motors. It's all perfectly laid out in his head.
And of course I'm like, "Uh, honey. What about all those other project cars in the garage?"
Except that I was not quite that sweet about it. I didn't curse. I didn't scream. I just laid out my feelings. He felt terrible. I then apologized and told him that of course he can do whatever he wants to but that I would not be driving to Houston with him. And that makes me feel terrible. But I have no desire to make that drive during covid times even if we are probably pretty darn immune at this point, not to mention that this is a little bit of short notice to recruit someone to house/chicken/cat sit. But mostly, the idea of making a trip like that now slams me so hard into anxiety that I can barely breathe.

Here's August, standing by a car being slightly intimidated by Miss Annie who was way too close to jumping up and taking a beak full of the apple the boy was trying to eat in peace. 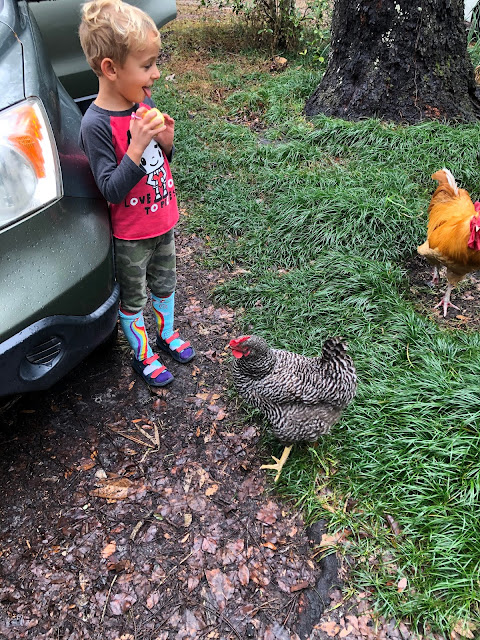 Liberace was showing interest too.

Time to go make supper. Isn't always about food whether we are humans or chickens? I think so.
Love...Ms. Moon