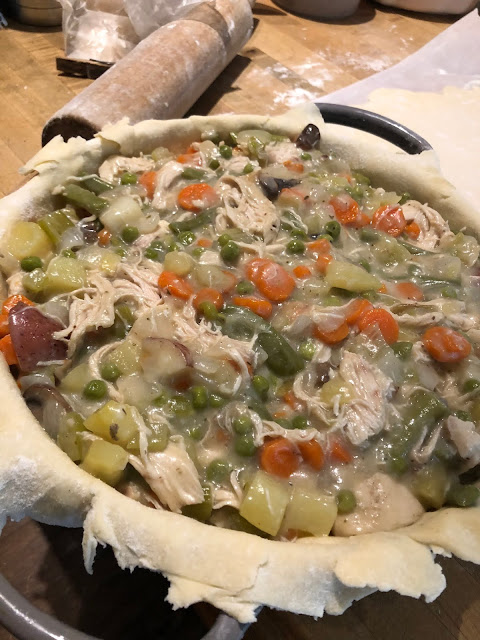 Well, if there was any doubt that I am crazy, it has now been completely erased.

We woke up this morning about the regular time and my poor husband looked rough. He'd had a headache all night and still had it and his sleep had not been good. His stomach didn't feel that great either. In fact, he couldn't even finish his whole supper last night. He also had body aches and was moving very slowly. He settled in his chair and that's where he's spent most of the day although he reports now that his headache is almost gone and he feels generally better.

I had the mild body aches and was slow, slow, slow. In fact, we both kept laughing at ourselves, moving like what I describe as slug-turtles. As Zen Glen put it, "It's hard to motivate enough to get moving."
And that's how it felt. In fact, it reminded me of how I felt after I broke my ribs but without the horrible rib pain. I just felt like my body had gone through something that needed extra attention and was instructing me to take it easy.
And I started out that way. But then I made my sweetie some poached eggs on toast with eggs that were so fresh they were still warm and then I decided that there was an awful lot of laundry to be done. Since it is supposed to be warmer here for a few days I decided to wash my Goodwill cashmere. I have been wearing it almost every day because nothing else keeps me as warm. And it needed washing. So I ran all of that on delicate which is no big deal and not hard to do in any way and then I rolled everything in towels and hung them up and started another load of bedding because it IS Friday and WE MUST HAVE CLEAN SHEETS AND THAT IS THAT! So. Did the sheets and then there were two more loads of just regular stuff that needed doing so all in all, I did four loads of laundry and the bed is remade, all clean and crisp and the sweaters are all hanging and everything else is dried, folded and put away.

In between this busy-ness I watched the bird feeder where dozens and dozens of finches were flocking to eat, the tiny little birds twittering and fussing and pecking and just generally being merry. All day long this went on and it's been beautiful.

So then I decided that I really did want a chicken potpie and so dammit, I would make one. Sweet Rachel had offered to bring us potpies from town but I felt up to the task of making my own.
That is, until I was about half way through the process when I realized that I was being stupid but hell- what are you going to do? Half of the pastry I'd made had already been rolled out, the vegetables were cooking, the chicken cooked, the onions and mushrooms sautéing in the butter.
I went into the Glen Den and sat in the granny rocker and almost cried, telling my husband that I had indeed overdone.
"Go lay down, honey," he said.
"I can't!" I wailed. "I'm in the middle of cooking!"
"What can I do?" he asked.
"Nothing," I whimpered. And then an idea occurred to me- I would take some Ibuprofen!
And so I did and before I knew it I was back at it, straining broth and stirring gravy and it all came together and I rolled out the top crust and here's what it looks like as it waits to be baked. 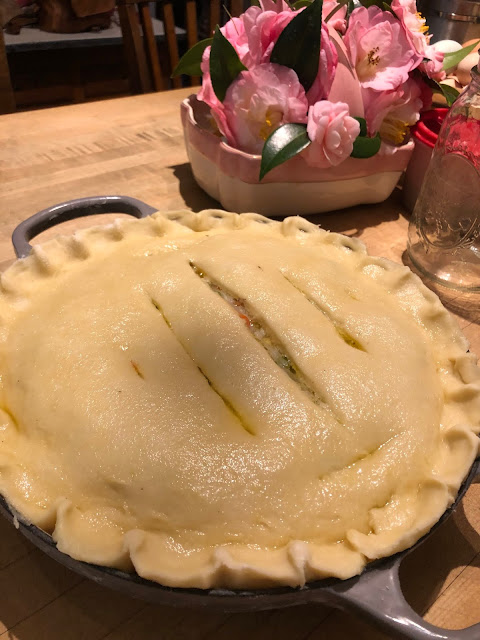 I hope it's as good as it looks like it will be.
I think that knowing that I'm not sick, that I'm just having a normal reaction to an immunization has spurred me to more activity than I probably needed to do but I'll be okay. If I still feel a bit punkish tomorrow, I will rest more.
I'm pretty sure we'll have leftovers.
So that's been our differing and yet similar reactions to the second dose of the Moderna vaccine. Not so bad, but definitely a reality. I think that Mr. Moon was quite shocked that he was experiencing such fatigue and aching but I kept reminding him that it only means that he is making antibodies galore and so it's all good. And oh! I forgot to mention both of us have sore arms but that seems to have gotten better over the course of the day.
And now to answer the question I know you are all asking- Are the Moons having martinis tonight?
Oh hell yes.
If I can wash the sheets and remake the bed, we can have martinis. Supper is ready except for baking and I even already have a sheet of aluminum foil on the rack where I'm going to cook the potpie to catch the drips. My new stove still has not been installed and therein lies an entire story involving the death of the patriarch of the family who owns the appliance store where we bought the stove. Buying local can require more human empathy and understanding than buying from someplace like Lowe's does.
It's okay and I am not impatient. All will eventually come together but until then, I would still like to keep a relatively clean oven.
Happy Friday, y'all.
Love...Ms. Moon
Posted by Ms. Moon at 6:12 PM