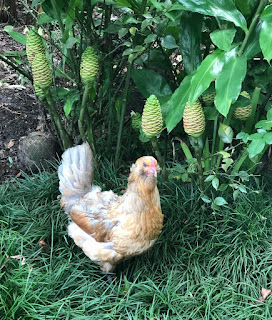 So. In chicken news I am convinced that I have at least two roosters in the four that are remaining of Darla's hatch. Not only is Elvis, Jr. a rooster, but I am now almost certain that Elvira is too. Did you know that Elvis Presley was born a twin? His older brother was stillborn and he was given the name Jesse Garon to go, I suppose, with the living brother's name of Elvis Aron. The spelling was at some point changed to Aaron.
I guess I could name Elvira Garon but that seems a bit disrespectful, don't you think? Although, I could name them Aron and Garon. I kind of like that. We shall see.

Guess what? I'm an idiot. No, no, seriously. I am. The barstools I found yesterday? They price tag did not say $80.00 for the set of three, it said $180.00. Big difference.
Oh well.
At least Mr. Moon and I got a breakfast date out of the deal. We went to a place called The Brick House Eatery in Monticello and they have an amazing breakfast. Have you ever had hash brown casserole? I hadn't until this morning. They were out of hash browns and substituted the casserole. We got portions the size of bricks, speaking of brick houses. No way I could finish the whole plate of food but it sure was good. 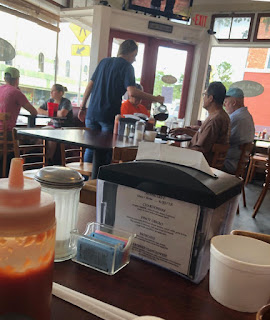 That was the view from our table. They definitely have it going on at the Brick House. Breakfast, lunch, and dinner. The servers are pros. The menu has everything from fried pickles to blackened grouper sandwiches and filet mignon. Three beer taps. Excellent iced tea. Right across the street from Wag the Dog.

Looks like Dorian has just been teasing us and is going to head up north without slamming Florida. Of course, it could change its mind any minute. And I really do fear for the Bahamas. And wherever it does decide to land.

The Rolling Stones played the last concert of this year's US tour in Miami last night and they decided at the last minute to change the date from the 31st to the 30th due to the uncertainty of Dorian's path. According to reports the house was full despite the change and Jagger started the show with "Jumping Jack Flash" whose opening line is, "I was born in a crossfire hurricane," and then when they played, as an encore, "Gimme Shelter" whose first two lines are "Oh, a storm is threatening/My very life today," in a moment that I've read had to be seen to be believed, the heavens opened up and rain poured down while Mick and back-up vocalist Sasha Allen danced their way down the catwalk stage (Sasha in high heels, of course) to do their powerful duet, rain be damned.
And when the last song had been played Mick said, "See you next time." 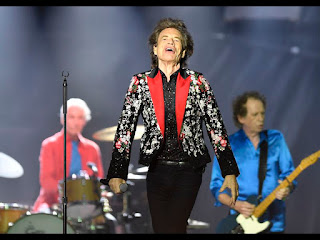 And bless this young boy. 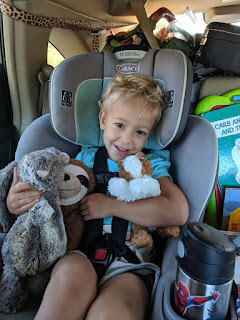 He and his parents and his brother are probably pulling up to their pretty little house in Tallahassee right this second after a long day of driving. And tomorrow I am having them out for pancakes and then Levon and August are going to hang out with us while Mama and Daddy get things unpacked and situated and maybe get to take a breath.
You have no idea how happy I am about this even though August does want to break up Mr. Moon's and my relationship so that he can have Boppy all to himself. I see this as more of an indication of his love and intelligence than I do as a threat.

Well. That's what's happening in my neck of the woods.
And you?