I do not remember a great deal about my drive from Denver to Tallahassee. I recall staying mostly in Howard Johnson Motor Lodges. I do not know why. I also don't remember how I found the sweet boy's house when I got to Tallahassee but I did. It was very near campus and was on the corner of two major Tallahassee streets, Call and McComb, and it was, to be quite blunt, what had probably been a tenement shack and there were two or three others, right in a row on Call Street. All of those houses are gone now but one of them, the one the sweet boy rented, had a bit of history in that Carlisle Floyd who composed the opera "Susana" had lived in it when he was writing his most famous piece of music. Florida State University has preserved and moved the house to another location and I'm not quite sure what they're doing with it. Here's a picture I found of the house and Floyd. 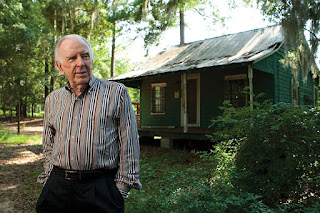 The house had a front porch, two main rooms, a kitchen and a bathroom, all very, very basic. I loved that house and it was haunted. I felt at home in it in a way I can't describe.

But when I found the house, parked, and knocked on the front door, no one answered but a guy who saw me from the little cabin next door came over and said, "Are you Mary? Are you looking for D.?He's probably at the music school. Come on, I'll take you over there."
And that was how I met Herb.
Herb did take me to the music school and we did find D. and Herb and I became very good friends and he was one of the kindest, funniest, craziest men I'd ever met. He was going to FSU art school at that time but he'd spent some time before that in prison. He'd been charged with possession of weed. He'd also been in Viet Nam if my memory serves.
He was always happy. I've mentioned that I was in a major depression then and I was and although I may not have even understood what depression was and certainly didn't talk about it, Herb sensed that all was not well with me. That I was, in fact, broken. And he became my buddy, my pal. Looking back I see that Herb was part of my healing because he accepted me the way I was and gave me nothing but respect and love.
I remember one night a bunch of us were very stoned and as stoned people will do, we got hungry. I excused myself, went into the kitchen and baked what I now call my hippie apple cake with whatever ingredients I had on hand which was not much. Herb took one bite of that warm cake when it came out of the oven and he looked at me and he said, "Lady, you are a goddess."
And I have never forgotten that.
He was big and he was burly and he was bearded and long-haired and he'd wallpapered his little cottage in aluminum foil and egg cartons for some reason (an art project?) and he'd painted an old Electrolux canister vacuum to look like a penis and he always had some crazy project going on.
At one point, he got an opportunity to go to Mexico to teach via some bizarre art-school contact but he couldn't go because he was still on parole so we came up with the good idea to write the judge who'd sentenced him a letter explaining the situation so that he could leave the country. We walked to the convenience store right across the street and bought a stationery pad, the only writing paper they had, which was printed on every page with one of those completely inane and ridiculous "Love Is" cartoons from the seventies. Because yes, this was the seventies.
Like this. 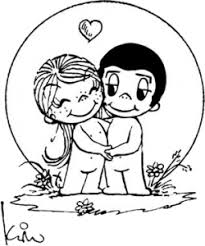 And then I proceeded to write the letter for Herb on this stationery and in the letter I pointed out that Herb had served his time and served his country and had gotten this amazing opportunity and so please, would the judge release him from his parol?
The letter was sent.
The judge released him.
I don't think that Herb ended up going to Mexico but eventually, he did leave for somewhere.
Right about the time he left, our good friend Bill Wharton, now known as the Sauce Boss who was then and is now a musician, woke up one morning to find an old National Steel guitar leaning up against the wall of his house on his front porch. No note. No nothing. Just that guitar.
And that guitar- well- it changed Bill's life. It changed his music, it changed his mind, it changed everything. And for years he was afraid that whoever had left that guitar was going to come back and claim it until finally once, Herb came back to town and touched base with all of us and he asked Bill, "Hey man, you still got that guitar?"
Herb had gotten it in one of his crazy barter-trades and knew he'd never play it but had a notion that Bill would. 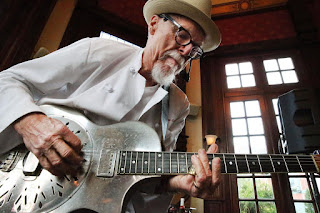 Bill's played that guitar all over the world and up and down and back and across the US many times. He's still playing it.
And that was Herb.
Last time I saw him he'd been down in South America working on some sort of gold recovery scheme from mines and he told me that he was going back and he was going to make a million dollars and that was all there was to it. And then he got into his little airplane and flew away.
Haven't heard from him since but I sure hope he made that million.

So that's my story about Herb and I'm enjoying writing these pages from the book of my story. They make me think about the past and about the people and places that have truly made me who I am. Tallahassee was and is filled with those people and of course those places.

Today we went to the river, my husband and I, and we met up with Hank and Rachel and Lily and the kids and some friends of Hank's and Rachel's and Kelly and Wiley Cash and then our beloved John and Melissa showed up and it rained but it didn't lightening or thunder and we got river wet and rain wet and snacked under the beautiful new wooden shelter that looks like a chapel. 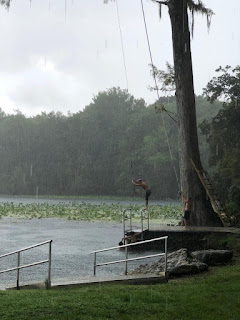 Eventually everyone left but us. It was perfect. 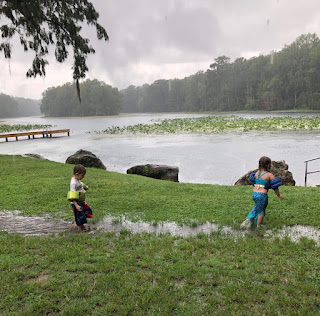 Wiley and Maggie played in their own little river as well as the big one.

This morning I got to spend a long time on the phone with my best friend since 1966 and just now I've gotten off the phone with May. We made each other laugh so hard.

And now I'm going to go make some pizza. The dough is ready to roll out on the pizza stone and I have spinach to cook for it and wild hog sausage to put on it and I can hardly think of anything better.

Thanks for coming along with me on these memory dances.