I Sing The Body Electric. Or Eclectic. Or Something 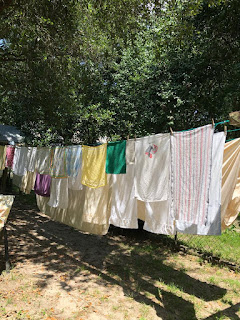 I've been quite housewifey today. Mr. Moon got up early, early to go fishing on the Gulf and I got up hours later to leisurely come alive and eat some breakfast and let the chickens out and do all that normal stuff. I took trash and recycle to the trash place and dropped by the post office and started laundry and went out and picked green beans and field peas and did a little weeding. I got a lot of field peas. 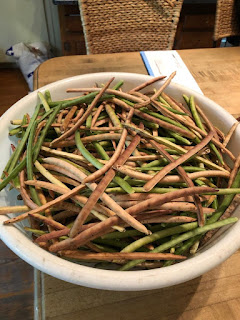 Some of them are already dried in the shell as you can see which rather defeats the purpose of fresh field peas but la-di-dah, they will be good anyway. I am noticing a lot of sweet potato vines which is funny because I haven't planted sweet potatoes in three years but the ones I never dug up have sent forth new shoots over the past few seasons and who knows? I may actually get a little bit of a harvest this year.

I did some sweeping and tidying and hung my laundry on the line. I sent a long, chatty email to an old friend and I'm not sure what all I did but I did talk to Maggie whose mother dialed (dialed?) the phone for her.
"What are you doing, Mer?" she asked.
"I am putting clean sheets on my bed," I told her. "What are you doing?"
"Oh, hanging out at my house."
She is getting to be quite the conversationalist. She also told me that they went to the lake and fed the ducks and that they had had a good time. Then she insisted that the boys say hello to me which they did although they did not seem to have a great deal of enthusiasm about it. And who can blame them? They had about 24 hours worth of MerMer yesterday and that's enough for anyone. But they told me they loved me and that's always worth hearing. Then Maggie got back on the phone and told me that tonight she is going to be a shark in the ocean but a good shark. I told her that that sounded like a great idea and asked if she was going to eat fish.
"Yes," she said.
"That will be delicious!" I told her.

Yesterday Jessie sent me a little video of Levon reading "Gus and Me", the book by Keith Richards about his grandfather. I think that Levon is quite taken with the book and he calls it the "song" book. I so wish I could figure out how to get the video from my devices to YouTube so that I can post it here but I've not been able to do that. It's the sweetest video. He sings as he looks at the pages and points out the guitar and the saxophone in it. His own little song is precious.
Last night Jessie wrote me that when August got into his bath he said, "Oh, this feels like honeydew."
I am not sure what that means but it sounds like something quite enjoyable.

Here's a picture she sent me of the brothers. 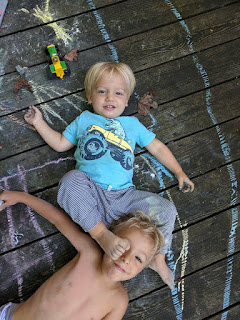 I really do enjoy having days like today where I can get things done. Sweeping spider webs off of doors, cutting new zinnias to replace the faded ones, replacing a broken string to rehang a wind chime. Washing a quilt, a rug, some towels. Moving slowly from one task to another, listening to a book as I go.
And then I sat down on the couch and shelled some of those peas and realized how much I love my body by watching a terrible British show called "Botched Up Bodies" as I shelled. The show is about people who have had terrible outcomes from getting plastic surgery and other cosmetic procedures and the extremes they have to go through to get them fixed. The fixes vary in their results and it all makes me so glad that I never succumbed to the promise of a perfect stomach, a perkier set of breasts, a more youthful pair of lips. My body has been through pregnancy and childbirth and breastfeeding- all a miracle. It has carried me thousands of miles of walking. It used to be a dancing body and I really was a very good dancer. It has allowed me to dig and to plant, to weed and to hoe. I have carried babies on my hips since I was twelve years old and although it has caused me great despair at times due to my ridiculous ideas of its imperfections and although my joints scream at me daily now, it has also brought me much pleasure. I have never once fainted. I have been, for the most part, ridiculously healthy. Knock wood. All of my parts, from womb to lips have worked quite well.
And I tell you what- although I look like someone who has spent sixty-five years using her body and spending way too much time in the sun, it's all right.
Mostly.
I still, to be honest, despair at times. But overall, I am mostly grateful.

And I will sleep well tonight.