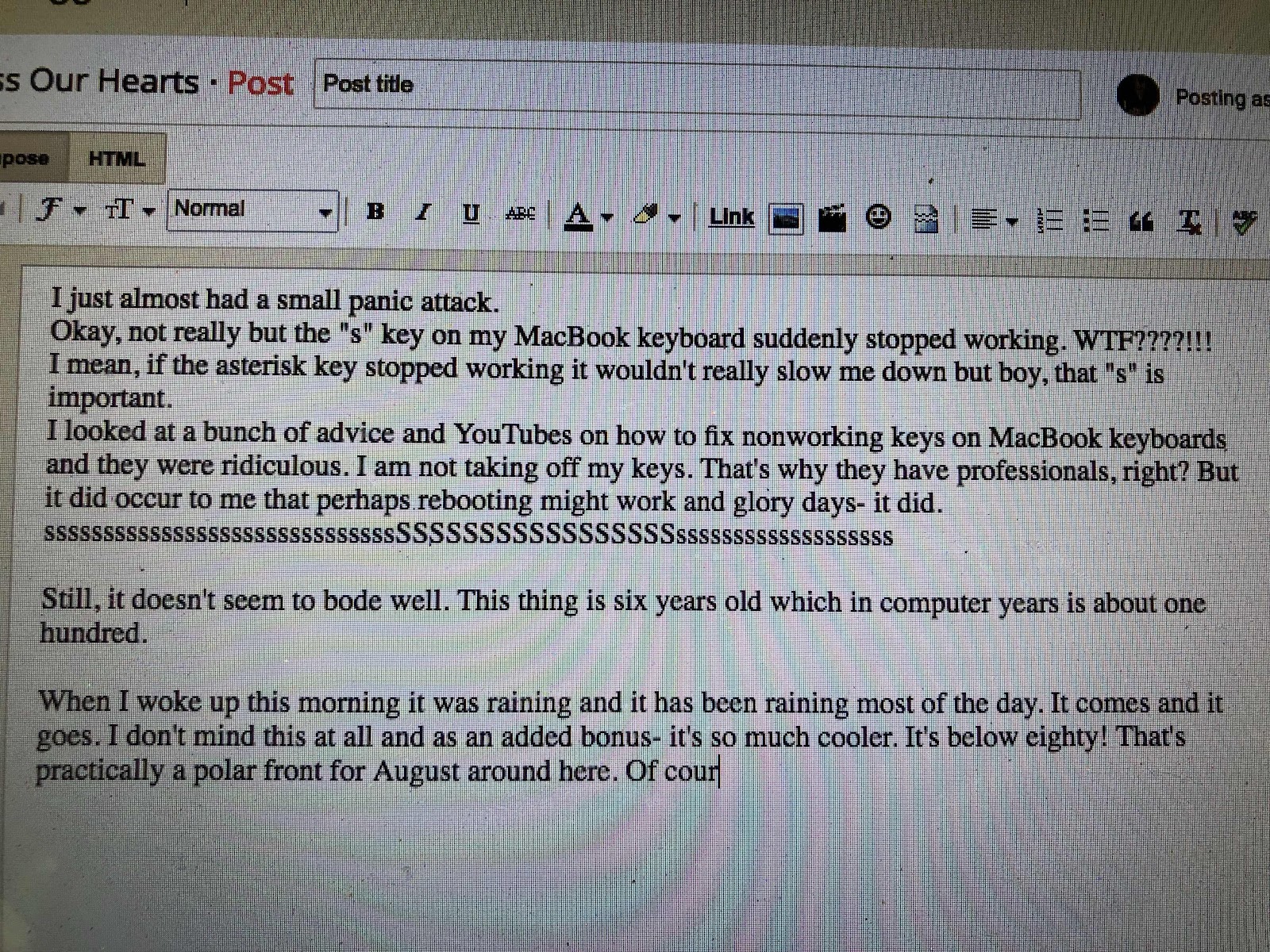 And then the “s” key quit working again and the reboot trick doesn’t work so...off to the professionals it will go tomorrow.
Dammit.
But in the grand scheme of things- not so much.
So this is being thumb-typed on my phone.
Tomorrow’s going to be a big day. The battery on my seven year old Prius finally seems to have hit its limit. When Lily and Maggie and I were in Monticello last Thursday my sturdy, trusty little car refused to start until I did something tricky with the key and the locks. We got home fine but when I tried to start it for us to go to the river yesterday the same thing happened and The Car Guy (aka Mr. Moon) diagnosed the battery needing replacing so he’s got to get me a new one of those AND go into work and get some things done and then come back and get me so that we can go to his MRI appointment. I am not going to let him do that by himself. He hates being enclosed in small spaces.
He’s such a good guy. Today he and another man went over to a mutual friend’s place to fix the leaks in the roof WHILE IT WAS POURING RAIN! This is the friend who’s been having serious medical problems. I made him a pot of soup but making soup in a cozy kitchen is hardly a chore. I kept some back for us and that’s what we’re having for our supper with a pan of cornbread that I’ll make.
I spent some time watching “The Family” on Netflix today and like Rebecca said- watch it with the lights on. I can’t tell you how strong my aversion to most forms of religion has become. This series only serves to make me feel even more strongly about it. While I watched I tried to do some embroidery on a pair of May’s old corduroy overalls that will fit August this winter and what I have discovered is that my left wrist, the one I broke in high school, will no longer allow me to do much needlework. It just purely hurts. This breaks my heart and makes my stubborn soul determined to find some work-around.
We shall see.
We shall also see how long it takes for me to be able to comment on blogs again. I suppose I could just leave a blank space for the esses. This may not work. I mean- “e  e “?
Oh well. At least my roof isn’t leaking and it’s not as hot as the burning surface of the sun.
I give a Sunday Church of the Batshit Crazy AMEN for those blessings and the frogs and crickets are singing a fine response.
At least in my mind that’s what they’re doing.
In The Holy Name Of Babies, Soup, and Rock and Roll...
Love...Ms. Moon
Posted by Ms. Moon at 7:27 PM