Another Day In Paradise

I'm not sure if any of you remember but a few years ago Mr. Moon underwent a long, long series of many tests to try and discover what was going on with his legs and feet. He went to a local neurologist who tested him for everything from genetic disorders to spinal problems and all things in between.
And nothing showed up.
"I give up," said the neurologist. "I want you to go to Mayo."
Well, that was in a December and because my husband is self-admittedly stubborn as a mule and on January 1 our insurance deductible (which was quite high) would have to be met again, he said, "Nope. That's enough for now."
In June, my husband turned 65- the magic age when Americans can actually get some cheaper healthcare. And so he made an appointment with the neurologist to get a referral to Mayo or some other place where the doctors might have a clue. And that appointment was today. I went with him, of course. You always need someone to go with you to appointments like this because it takes two of you to ask all the questions and remember the answers.
And so the doctor is going to start with the testing again. No more genetic testing at this point because that hasn't changed. But the blood work, the MRI's, the EMG's...all of that will begin again. As the doctor said, wherever we go they're going to want all of the results of these tests and who knows? Maybe something will be more obvious this time around.
And so we have begun.
It is a dreaded process but if there is anything that can be done to halt or slow down the progressing difficulty that my husband has walking, we want to know about it. And of course, one just wants a diagnosis. Humans are like that.
I think that also, I am going to start doing more research online. Why not? I'm not apt to believe quack-sites or miracle-cure sites but perhaps there are other people who have what he has who have figured out some answers as to what and why.

In more cheerful news, Lily has decided to let Owen and Gibson walk home from the bus stop this year. That's a walk of a mile and I am all for it. However, because we live in this time where children are to be monitored every moment they both got phones today. I have mixed feelings about this but they're not getting all of the features that phones offer. I'm not sure what that means, exactly because we haven't discussed the details, but today I got first this text. 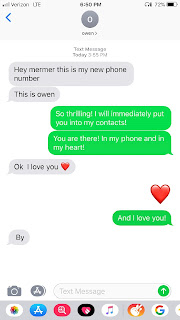 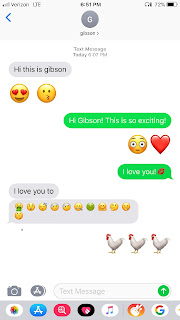 One thing I absolutely do not have mixed feelings about is being able to text back and forth with my grandsons. Gibson is an amazing speller for a kid going into the second grade and I am very proud of him for that. On the drive to North Carolina, Lily did spelling bees with them, using online lists of words from different grades and don't tell Owen I told you this but Gibson can spell more words than Owen who is going into fourth grade.
That kid is full of surprises.
So I'm just going to embrace this and face the fact that it's a brave new world. And add them to my contacts.

And that's what my day has been like. I did take a walk and I think I got mild heat stroke from it but probably not. It felt like it though. It's hot as hell. The green coolness of North Carolina is like a dream to me now. While I was walking I passed some guys working on the grass around the sidewalks (sorry, Mr. P! I AM in the USA and that is what we call it). They were picking up trash and using a weed wacker. (Not a weed WANKER, Mr. P!) and I felt so sorry for them. The boss was sitting in his air conditioned truck while the other two men toiled and broiled under the sun's direct rays.

Did you see where Trump told the people in Dayton (I think it was Dayton. It might have been El Paso or perhaps Toledo) that God was watching when they slaughter occurred?
Reminds me of a joke that I heard recently on Comedians In Cars Getting Coffee.
A holocaust survivor dies and goes to heaven but before God lets him in he says, "Tell me a joke."
So the old, old man tells him a holocaust joke.
"That's not funny, " says God.
"I guess you had to be there," said the survivor.

It took me a second to get it but when I did it occurred to me that this might be one of the most profound things ever said about religion.

We shall see what tomorrow brings.