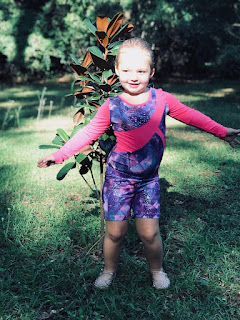 Well, today had its ups and its downs, especially if you were Magnolia June. By the way, she's posing in front of her very own Magnolia tree. I believe it was planted over her placenta because that's the way we do things 'round these here parts. In that picture she was very happy. She was wearing her new dance clothes which she picked out herself and which are actually gymnastic clothes but for the class she's going to the kids can wear whatever they want as long as they have the right shoes. So she was happy, as noted, and excited and then it was time to start class and the world turned upside down. Turns out that these days parents can't actually observe the class first-hand, they sit in a lobby of sorts where there are video screens which show the classes via camera. There were only four children in the class- three little girls and one little boy and the teacher was wearing a pair of gym shorts and a Dr. Seuss T-shirt and had bare feet and you could see where her eyebrow piercing jewelry had been taken out and all of this was a bit new for old me who remembers when dance teachers, even for the very young, wore the classic tights and leotards and ballet shoes, etc., etc. I suppose all of that balletness was to give the children a picture of the ethereal being that ballerinas are as a sort of motivation. Or something.
This is not a criticism of the teacher of this class or of this school in general. It was just a bit unnerving for me.
So Maggie was being a bit shy but she went into the studio and she did stand on her spot for the first half of the class wherein they wore tap shoes and did little tappy things and when I say "they" I mean the teacher and one little girl who had taken dance over the summer. Maggie and the other little girl just stood there looking shocked and shy and the little boy stood in the corner looking vaguely amused. Or something. I'm not sure. It's difficult to see over the nanny-cam.
As soon as the tap shoes portion of the class was over and the children came back out to put on their ballet slippers, Maggie lost it. She wailed. She cried. She clung to her mommy. She did not want to hear anything about how nice the teacher was or how after class she could get a cookie at Publix or ANYTHING! Eventually, when class resumed Lily took her back in the class and stood beside her by the door and finally she slipped out of the door which brought on fresh new tears and wails and finally, the teacher opened the door and let her out.
Ooh boy.
Not a great beginning.
But you know- some of us just have a hard time at first with new experiences.
Before we left she did thank the teacher which took quite a bit of bravery on her part.

Since we had about an hour before it was time to pick up Hank for lunch, we decided to go by Costco where, we discovered, everyone in Tallahassee was shopping for hurricane supplies and filling up their cars with gas. I mean, people were lined up to the road waiting for gas.
Okay. First of all- the storm isn't even supposed to hit Florida (if it does hit Florida which it probably will but really, who knows?) until Sunday. Three days away.
Secondly- people were buying flats of water. In plastic bottles. Of course. Now, I'm not sure that people who are on what I call "city water" ever lose their water during hurricanes. The city has that covered. Okay? And why in HELL can't people fucking save containers and fill them up with tap water if they feel the need to have extra water on hand? You ever hear of a bathtub? You can fill that sucker up and use the water to flush your toilet for days. It's ridiculous. And sure enough, it was announced that Costco had run out of water before we finished our shopping.
This whole thing just sickens me. Do people not realize that the water they're paying out the butt for in planet-destroying plastic bottles comes from municipal water supplies for the most part? I talked to a woman later on in the day about this and she said that she generally keeps four cases of bottled water on hand because that's what her family drinks and she had been down to only two cases so she bought five more to have in case the hurricane gets here and she has two little children and they need to stay hydrated in this heat.
WTF?WTF?WTF?
I have no hope for this planet. None at all.
And guess what? We don't deserve to live here. We're too fucking stupid.

Okay. Calm down. I'll step off my soapbox for a second.
Take a breath.

We went to lunch at Maria, Maria's and it was as great as it was the first time and there were lots of customers. Good for them! The food actually reminds me of Mexico. Now don't get me wrong- I love Tex-Mex as much as the next gringo but to eat food that takes me back to the streets of Cozumel is a pure pleasure. It was good to see Hank and Rachel. By this time Maggie had completely gotten over her trauma and calmly and steadily ate her way through a goodly portion of chicken fingers and french fries and no, they're not Mexican, they are Childrican.

They still don't know what this storm is going to do. Right now the National Hurricane Center is giving a forecast that looks like this. 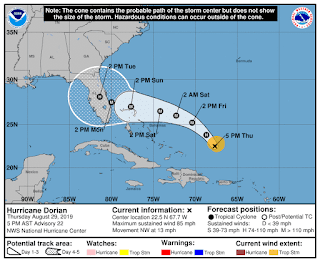 As you can see, the entire state of Florida is in the aptly named "cone of uncertainty." If you want to read a truly scholarly and fully fact-filled opinion about what's going on you can go HERE.
I feel certain you do not so just go ahead and watch the weather channel and see people go into histrionics about it all. One thing that most of the forecasting models do agree on is that the storm is going to be a Category 4 when it hits land and that, my friends, is a strong fucking storm. Winds of 130 to 156 mph and nobody wants to be in that kind of crazy. Did you ever see a full-grown tree bend in half? I doubt we'll see winds like that here in the Panhandle of Florida and we may get almost nothing at all. Or hell, it could cross the state, hang out in the Gulf and gather strength for awhile, head north and knock the shit out of us.
You just never know.

And there's nothing we can do about it except to buy lots of bottled water and make sure our cars have gas in them because nothing says fucking stupid like getting in a car in a hurricane to evacuate at the last minute.

This has not been a very Zen-like post. I would apologize for that but I've never claimed to be a Zen-like person. I'm a cranky old woman who swears like a dirty sailor who has already seen enough hurricanes to last her the rest of her life.