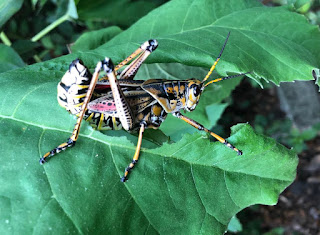 That there (and for some reason I feel I absolutely must use those two words in that exact order) is a Georgia Thumper grasshopper. He was happily gnawing through one of the rice paper plant leaves in my yard today. Some people call these things "lubbers" but I've always heard them called Georgia Thumpers and it is almost mandatory for even the most Buddhist among us to thump every one of those things we see to the ground and then smash it because they just annihilate yard and garden plants. We see it as adding nutrients to the soil.
I did not smash that one. I just didn't have the heart. I have too many rice paper plants by far and so I just let him continue on in peace although it's probably a she and will give birth to thousands just like herself.
And by the way, he/she is about three inches long. If not longer.
Which, if you ask me, is entirely too big for an insect.

You may notice I haven't discussed the news lately. This is probably because I just don't know what to say. It's not that I'm not thinking about the tragedies that occurred in El Paso (which, by the way, is where I was born) and in Dayton. I feel the way any thinking human feels which is gutted. Devastated. Unbelieving. Outraged. Beat down. Horrified. Frightened.
And absolutely certain that until we outlaw these goddamn assault weapons this is going to keep happening.
Of course I blame Trump and his racist rhetoric but I am also aware that mass shootings have happened under other people's presidencies and that crazy people (and you have to be crazy in the very worst kind of way to commit such an act) are going to rationalize what they do with their own twisted logic. BUT, the person who occupies the White House at this moment is adding fuel to the fire of hatred and racism and violence and there is no denying that. He IS inciting violence. That's just a fact. He IS a racist. There is no denying it. Except perhaps by him but we know he lies every time he opens that anal-opening of a mouth of his.
Did you hear his little speech the other day? It is so obvious that he cannot really read. And that may be part of his problem. He's probably been ashamed of that his whole life. He never got the diagnosis and education that a person with a reading disorder needs. But that's not a defense of him in any way. He may have been a different person if his father had loved him more. If his mother had loved him more. But there comes a time in any relationship when one partner can no longer defend staying with an abuser due to whatever happened in the past to make the abusing partner the way he or she is. The point becomes moot when the threat of violence is too great.
And we Americans who are in an unasked-for relationship with the Great Orange Abuser have got to figure out how to cut him out of our lives.

And we have to figure out how to get out of our relationship with easy access to firearms. For the safety of ourselves and of our children.

So sayeth I, and so now it shall be done.

I really do not want to disrespect or sully the name of one of the greatest writers of our time but it is impossible to not say how deeply Toni Morrison will be missed. She, like Maya Angelou, was for me a woman who showed by example that it is possible to survive almost anything, rising from the fire of abuse and racism (not that I've ever had to suffer a second for my white ass) and misogyny- burnt clean and sharp and strong like a knife blade forged in the hottest flames.
I've always said that because I didn't have a father growing up, I've chosen my own father figures. B.B. King. Jimmy Carter. Those are two.
But as I've gotten older I realize that I have also subconsciously focused on women whom I see as archetypal mothers and Maya Angelou and Toni Morrison were two of those.
Perhaps I should say that they are two archetypal women. Goddess-like in my eyes.
We need those women. And we have one less today.
I am grateful that she lived among us and grateful that her art was language. She blessed us with her presence. And we will always have her words.

So it's been a day in Lloyd. I took a walk, I went to the library, I made a salsa verde to become part of a shrimp enchilada dish. 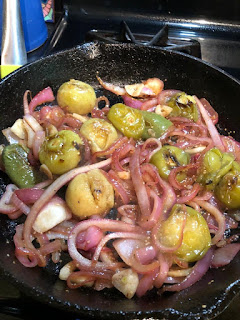 The first time I've ever cooked with tomatillos.

There's so much more to be said but it's not going to come from me tonight. I am going to selfishly hang on to the goodness in my life and try very hard to be aware of all of it. To acknowledge it. To do otherwise would be folly and pointless. To ignore that which is love in order to focus on that which is evil helps no one.

And so it is and so it goes.