I am almost tempted to start a dream blog.
Last night's dream was excellent. I was in a movie. Now how this happened is a mystery to me. I had a pretty good role, too, although I have no idea what it was. I never saw a script. But everyone was so nice and although things were pretty chaotic I didn't have any responsibilities when it came to dealing with it. They had pros to do that! I felt very safe there. I lost my purse but I was never worried it was stolen and then I found it. Guess who was in the movie? Go on- guess. I'll wait.

Guess who else was in it?
Oh, you know- BILL MURRAY!
I was going to be in some scenes with him but unfortunately, the dream ended before that happened. He was a jolly sort, though.

And perhaps because of that dream I was in a very good mood today. I had several of those "I feel happy" moments. And all I did was to take a walk on White House Road and go to Publix and iron. Not at Publix. I came home to do that. At Publix I got the lagniappe treat of seeing Lily and Lauren and Maggie. Maggie asked me what I was doing there. I told her I was shopping for some things I needed.
"Do you need catfood?" she asked. I told her that I did not but that I did need pickled okra because her brothers ate all of mine.
Our friend Penny who works at that Publix had given her some change. Penny always gives the kids a little bit of change. That's what she does. Maggie showed me her dimes and pennies.
"I love Penny," she said.
"I know you do," I said. "She is very sweet."
I talked to Penny a little later and she said that she'd called Maggie Maggs and said, "Is that all right? Can I call you Maggs?"
Maggie said, "No. I am Magnolia June Hartmann."
I guess that even if you give Maggie money you are not allowed to call her Maggs.
Noted.
Speaking of Magnolia June Hartmann, this picture came up in my FB memories as the most loved post of 2016. 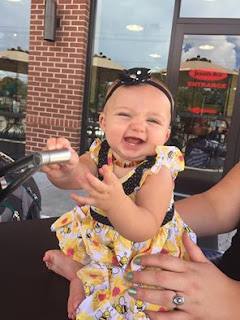 How glorious that baby girl was! And she still is.

Lily reports that Owen and Gibson's bus took an hour to get them to school this morning and two hours to get them home. This is a bit disturbing in that their school is approximately ten minutes away from their house.
I suppose that first-day kinks will be worked out. Still. That's a long day for two young guys. Luckily the school kept e-mailing the parents to let them know what was going on. I remember once when Jessie's bus was ultra-late and I almost had a heart attack. You'd think that by the fourth child I would have been a bit more sanguine about such things but no. I was not even though I had talked to the principal on the phone who assured me that all was well. This was pre-texting. I honestly do remember how incredibly panicked I got.

And that's the news from Lloyd. We got a short but lovely downpour this afternoon. It thundered mightily and then came the rain. It is actually a little cooler now which is so good. It was 98 when I drove home from Publix at 2:30. It's definitely take-more-than-one-shower-a-day weather and it's also a light-a-candle-to-the-gods-of-air conditioning situation. It's just sticky and nasty. That's all there is to it.