When I drove my little Capri halfway across the country at the age of nineteen I had never driven farther than oh, perhaps a hundred miles or so. I look back on that experience with a bit of wonder. How did I get so brave?
But then I remember how desperate I was to get out of Colorado. I was living with a drug dealer and although he wasn't an unkind person, he had what, to be kind, I shall call quirks. He had a very good business going on and finally the cops were catching up to him. We had been warned that a sheriff's car had been parked down the street for a few nights running, watching cars come and go. So there was that. And I had lost any affection I might have had for the drug dealer. I had only moved in with him because my old roommmate, a girl I truly did like so much, had told me that my depression was too hard to live with and so she was moving in with someone else.
I do not blame her.
And this guy asked me to move in with him and so I did and at least he had a heated waterbed and I tolerated the constant playing of the Greatful Dead on his stereo for awhile but then things just got too much for me to handle and I had that sweet time with the boy in Winter Haven over Christmas break and he'd said those fateful words- If you hate Denver, you can move to Tallahassee and live with me.
At that time in my life I was looking constantly for a man to protect me, to love me, to give me reason to live. It really was that simple. And so his words were heaven sent to my ears and I quit school and waited for the snow to melt enough for me to get the fuck out of Dodge and the drug dealer found a new girlfriend who looked startlingly like me and somehow we all shared the same apartment for awhile and a boy who was a friend of the drug dealer's truly was an angel and he babysat me, in a way, making sure that I was okay and when I finally packed up and left he was there in the early morning to wish me well and he gave me a few joints and off I went.
I have no idea what that boy's name was and I cannot remember what he looked like but he was just pure sweet and I am grateful for him.

I do want to write more about that time in my life, and I will. And that's a beginning or perhaps Part Two if we're to be honest. I think that the drug dealer is dead now and I heard that he was indeed arrested. I escaped that situation by the skin of my teeth and I am grateful for that too. My life would certainly not be what it is now if I had been busted, put in jail, had had to deal with my parents and bail money and lawyers and, and, and...
No. Just thank you Lord Jesus no.

All of this is probably why there was very little that any of my children did (that I knew about, at least and I know all I want to know, thank-you-very-much) made me completely crazy. Mostly my kids were good and some of them were beyond good but you know teenagers. I was able to be honest with them and talk to them about things coming not from a judgmental or preachy or freaked-out place but from a place of knowing exactly what it was like and also knowing that I went through it, I survived, and grew up and became their mama and a fairly upstanding citizen. There were even things that I went through or did that I am glad I went through and did. Illegal things, perhaps. Outrageous things. Dangerous things, even. Maybe. I am who I am because of those experiences and for me, because I started having children fairly early, the years of those experiences were short.
But I've often said that having my babies saved my life and this is true. Not just because being a mother made me step back in more caution and become responsible, which it did, but because the recurring depressions may well have had vastly different outcomes.
As a mother I not only had to be responsible, I had to be alive.

And today was a day I was glad I was alive. Because the weather forecast called for rain all day, Lily and I decided to go to Monticello and see Terez at the library and do our thing there. Which we did. Terez was glad to see us and we were glad to see him. Maggie played on the computers. 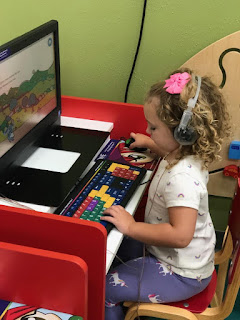 After that she played in the book room, putting stuffed animals in chairs and giving them books to read. I offered over and over to read books to her but she was too busy pretending.
Lily and I checked out books and then we went to Wag the Dog which was filled with new treasures. Maggie got a baby doll- quite possibly the ugliest baby doll I've ever seen mostly because it has an umbilicus which looked unlike any umbilicus I've ever seen on a human baby. Or animal baby either, for that matter. Didn't bother Magnolia though. She loves her new baby.
I found a precious little plate and bowl with this pattern on them. 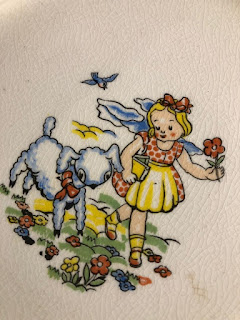 Mary had a little lamb. Could that be more perfect? Wouldn't it make a darling tattoo?
And a blue-gray linen tablecloth whose weight when I picked it up felt like pure goodness in my hands and which has a crocheted lace border around the edges. 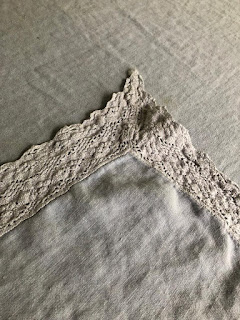 It is hard to describe my love for things like this. They are beautiful to me in a way that I can't explain. Here it is on my back porch table. 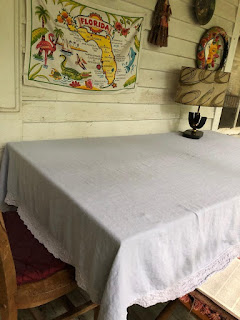 We found Maggie tap shoes and Lily got her a dress.
So a very good day at the thrift store.
And then on to lunch we went and it was actually cool enough to sit outside and Maggie played with the blocks, keeping her baby nearby at all times. 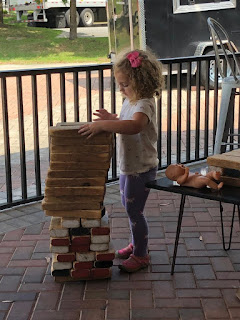 Oh, I can't wait for the Weatherfords to get back so that August and Levon can help build too. We had delicious lunches and then we drove back to Lloyd where Maggie got to play a little bit with her new carriage which she likes very much.
When we walked into the house she said, "Mer, I love your house," and later on when she was sitting on my toilet she looked around at my bathroom with its pictures of the madonna and the baby shoes on the window frame and the mish-mash of rugs and the jewelry hanging off an old mirror and all of the stuff of it and she asked, "Who decorated your house?"
Which made me laugh.
A three-year old who asks who decorated a house?
"I did," I told her. "Except that Boppy decorated most of the Glen Den." That's where the deer heads and fishing trophies are. And beer steins collected in Europe when he played ball there and the TV and the toys and so forth.
She nodded sagely. This all made sense to her. And then it was time to help her wipe her little bottom and she rested her head on my thighs as children do when you help them with their pottying and I thought of all of the times that those thighs have had children's heads resting on them while I wiped their butts and it felt right.

How can I not be glad I moved from Colorado to Tallahassee? It has all led to this.

It's raining. It's not burning-up hot. I'm cooking field peas I grew in the garden my husband and I tend.

Time to make the rest of our supper.