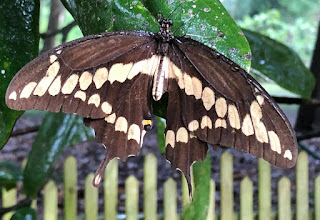 That's an Eastern black swallowtail butterfly, I do believe. I spied it just now walking back from the hen house where I collected three eggs, one so fresh that the protective coating hadn't hardened yet and it was not warm, it was hot. Anyway, the butterfly is on a magnolia leaf, perhaps drying out her wings as we just got a nice little downpour. Or just hatched as far as I know. I am ignorant in the ways of butterflies.

So when I got to Tallahassee all of my troubles did not magically disappear even though I felt a deep sense of being far more at home than I ever did in Denver. I had arrived in a state of deep depression and looking back now, I see that I was already suffering from some anxiety which made it hard for me to ever feel as if I fit in completely, even with the people I met who were, for the most part, so dear. I think that on that first afternoon I not only met Herb but also a woman flautist who was going to FSU's music school with the sweet boy, and also Bill Wharton.
Lisa, the flautist, was from Miami and was brusk and tough as a woman could be. Or so she presented herself at least. She did not suffer fools gladly. She had a voice like Janis Joplin's, rough and her laugh was a cackle. She loved reefer. She was diabetic and that wasn't stopping her for a second. She was fierce and determined and forthright in all ways.
She scared the shit out of me.
Bill was another story. He dropped by the house to show the sweet boy the guitar he'd just gotten. An Ovation and I can remember like it was yesterday, him sitting on a chair and showing us how easy it was for that rounded-back of an instrument to slide from his lap but he cuddled it up and he played a little bit and told us he'd just gotten a job as a roofer.
"A reefer roofer," he said.
I think he worked that job for about a week. Bill's a musician and that's that.
And that was the beginning of meeting D's network of friends. They were all kind to me but it was hard for me to accept being accepted. In Denver I'd been the southern girl. I was literally asked if it was true that southerners like watermelon and fried chicken. Not black people, specifically, just southerners in general. My accent got made fun of. I had very limited experience with drugs or alcohol and the preponderance of students there from NYC were, to say the least, quite experienced. They'd all gone to prep schools (and believe it or not I didn't even know what a prep school was) and mostly chose DU because they loved to ski.
Well, I could water ski but I sure wasn't going to bring that up.
Anyway, I felt like a true alien among them. I did make a few good friends but I am not in touch with one of them and haven't been for many decades.
So here I was in Tallahassee meeting a whole new group of people, mostly musicians, some artists, hippies all, and who was I?
A college drop-out with no goals, no achievements, no desire to go back to school, no purpose, suffering from depression but trying to pretend that all was well and I was cool- what did I have to offer?
I had no idea.
And then to make things even worse, D. decided in about twenty-four hours that me living with him was not a good idea and that's when I completely lost my shit. I'd driven more than halfway across the country on the premise that I'd have a place to live and a man to love and, well...not so much.
As I've said before, I am certain that he never thought I'd take him up on his offer for me to come to Tallahassee and live with him. And he was busy. Music school was no joke. He had hours of rehearsals and classes. And he didn't want or need to be tied down. Not in the least. And I understand that now but my god, I was so lost then.
D. let me stay in his house for awhile and I did everything I knew to do to try and get him to change his mind. I cooked. I domesticated until I couldn't domesticate anymore. I listened to Mahler and Pink Floyd, neither of which I really enjoyed. I got stoned. Finally I moved into an apartment that a friend of D's in the music school needed a roommate for. I didn't know her very well, didn't like her very much, and we had nothing in common. I cried. I cried and I cried and I cried. I slept a lot.
I got an ulcer.
But slowly I made friends with other people and slowly I began to make a life for myself and slowly, the light began to come back into that life.
It took a long time and there are many stories that are part of how I began to make my way back.
Back from where, I am not sure. I think I'd been depressed and anxious since early childhood. But I scrabbled up that rocky cliff one handhold at a time and was graced with the love of a few people and all of it led to where I am now.

I want to tell some of those stories. How one hippie, broken girl managed to hold on when it was unbearably hard. And how over the decades she found, if not complete healing, at least a way to live with the past. 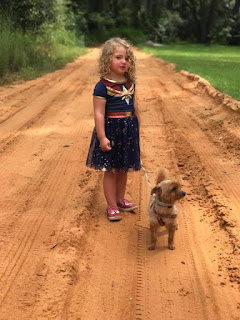 Maggie and Sammy on the red dirt road in front of their house. That's where this life has led me.
And this picture of Levon that Jessie sent yesterday after a long, arduous hike up a mountain. 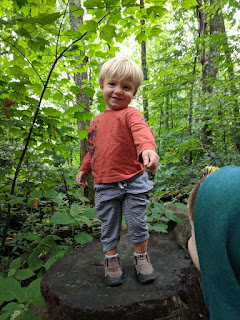 I wish, oh how I wish, that I could have whispered in that hippie girl's ear and told her that it would all be okay. To try and not worry quite as much. To even, dare I say it? Enjoy herself a little more.
Because it is okay. And all of that has resulted in this.

Fresh eggs and butterflies on magnolia leaves and grandchildren whom I adore more than words can describe and a man I've loved for thirty-six years and so much more than I could ever have imagined.

I'm not really a fan of the Greatful Dead. They never played the music that made my soul dance but when they coined the phrase, "What a long strange trip it's been," they nailed it.