We Are All Doing Our Best To Survive (Trigger Warning) 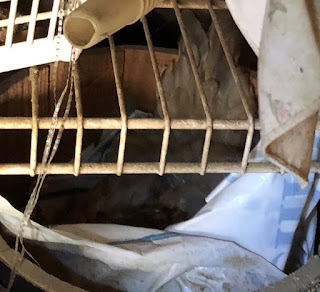 If you look very, very closely at that picture you can see Violet's tail feathers.

Mr. Moon came in last night and said, "I found your chicken."
And indeed he had. I have no idea how he found her where she's hidden which is in the midst of some junk over by a wall in the garage. Well, Mr. Moon wouldn't call it junk. He'd call it stuff-he-might-need-someday. And he's probably right.
The point is, though, that Violet is indeed brooding although I can't see any eggs because I can barely see her, and I sure am glad she's still around. I always get worried when a hen's on the nest. They barely move or eat or drink for three weeks. That's a long time. She seems to have found a decent place but if a coon or a possum smelled her, they could easily get to her. Chicken nature is chicken nature and human nature is human nature and I want to go and move that little wooden bowl with her and her eggs in it so bad. MY brain tells me that she'd be so much better protected in the chick box in the coop but I know damn well that once when we moved a nest of hatchlings and the mother in there a snake got in and ate two babies so it wasn't really that safe anyway. But she'd be closer to food and water, at least.
Best I suppose to just let her be and let her be the judge of all of that. She could have laid her eggs in that chick box to begin with but chose not to. She's a wily little half-wild thing so maybe she'll be okay.

I've been thinking all day long about an interview I heard on NPR today. It was on Fresh Air and the person Terry Gross was interviewing was a documentary film maker named Jennifer Fox who has made a "fictionalized memoir" film called The Tale and the subject is the sexual abuse she experienced at the hands of her male track coach and her female riding coach when she was 13. It sounds like a very powerful film and it's always a good thing in my opinion when the sexual abuse of a child or children is explored in an open and honest way. It helps not only the people who have been abused in their lives but also perhaps helps to prevent abuse of future possible victims. Ms. Fox insists on calling herself a "survivor" though and I understand that. I myself went to a sexual abuse survivor's group a long time ago and it helped me tremendously although it was horribly painful at the same time.
Nothing that Ms. Fox said in the interview shocked me but parts of what she said did disturb me. She talked a lot about how it's rarely acknowledged how many abused children truly loved their abusers. And indeed, she says that for thirty years she never truly thought of what had happened to her as abuse. She thought of it as a love story.

This blew my mind.

This is an intelligent, well-educated, aware woman who for thirty years kept this secret because she thought that no one would understand the sort of love she'd shared with these people.
And honestly? I'm not sure that she's yet come to a full and honest determination that love wasn't involved. Her words indicate that she does understand that but it felt to me that she is still somehow protecting them out of what seemed to be a distant memory of how she felt then.

"What happens ... is that there is a slow manipulation into the child's world by the adult in which the adult is showering love and attention on the child and making them feel special. And that's why it's often — if you talk to any prosecutor — hard for children to prosecute their abusers because they feel such a complicated feeling of love and appreciation and respect, and often that person may seem to the child to be the only adult that loves them."

But to me, it is exactly this- this manipulation of the love that a child so often feels for his or her abuser that is the greatest sin of all because the odds are very strong that the child will never grow up to be a person who can trust love. Who will be, at the deepest core, afraid to give love or to feel love because look what happened when he or she did.

Perhaps it is because Ms. Fox was thirteen when she was abused that she was able for so many years to tell herself that what had happened was love. At thirteen, even if a girl's body is not developed, her mind is probably already filled with ideas of love and romance and what they will be like. This may well be a cultural thing but it is a reality.

For me, at the earlier age of eight or nine, I did indeed feel very loved by my abuser at first. And oh, how I loved him! He was a new stepfather who literally stepped into our lives and filled the shoes of a daddy which I had so longed for. It seemed like a fairy tale that this tall, handsome man would become a part of our family and perhaps make our mother happy after so many years of what I now realize was her suffering from depression and who would be the father that my brother and I so sorely needed and wanted. He was kind and he was sweet to us. He took us on boat rides and gave us gifts. He made me feel beautiful and cherished which were two things I'd certainly never felt before.
All of this right up until he actually married my mother and they got back from their honeymoon and he began to molest me.
I tried so hard to keep the fantasy of this loving daddy alive but with that first touch I knew somehow that this was all so very, very wrong and I began to fear him instead of loving him.
And then eventually, to hate him.

Well, survivors of sexual abuse all have their own stories even though, as I discovered in the group meetings I attended, there were themes which were repeated over and over again.
And Ms. Fox's memories and her feelings and her emotions and her ways of coping are as valid as anyone's.
I don't have anything to say to tie all of this up neatly in a pretty bow to present to you. If there's one thing I know about sexual abuse, there truly is no end to the repercussions whether we realize they are repercussions or not.

I just know that I am grateful for a life where I've had the advantage of knowing from an early age that what was done to me was wrong and for the opportunity to find a therapist who knew what she was doing and who helped me to the extent that she probably saved my life. Not to mention the love which my family has given me over the years and a husband who has had to put up with far more pain than he probably ever bargained for and certainly did not deserve.

I'm going to go make him some noodle soup.

Thanks for all the good wishes about my little hen, Violet.
They mean a lot to me.