Hey! I'll Have The Whole Bed To Myself! 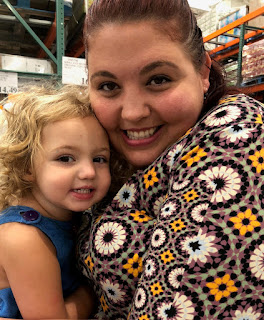 Today's been hard although that little girl and her beautiful mama helped me tremendously simply by spending time with me. We went to Costco and ate lunch at the Indian buffet and then went to Publix. I think that Maggie likes being the only child at home while her brothers are in school. She's such a mama's girl and she has her all to herself. She was sweet to me, too, and held my hand a lot and wanted me to carry her a lot. As Lily pointed out, children probably have no idea how heavy they can be. Maggie weighs over thirty-five pounds now I think, and that's a lot for an old woman's hip to carry very far but I do my best to accommodate her wishes.
Let me also say that we did not go ten minutes today without someone stopping and saying, "She is adorable!" about Maggie.
And she is. That child could have a career in modeling right now if we could figure out how to go about it. Maybe Lily should get on the baby beauty pageant circuit. I feel certain that if we taught her to sing "On The Good Ship Lollypop" and do a little tap dance routine, she'd become world famous and Lily and Jason could put in a swimming pool and Maggie would have a college fund. However, seeing as how it's not even worth it to try and put the child's hair in a barrette, this may not be a viable plan.

The reason the day's been hard is that this is the day Mr. Moon is leaving to go gator hunting and although I really am fine by myself and even admit to enjoying a bit of time to myself with no one's needs to be considered but my own, it's still hard sometimes to see him go. I'm sure that by the time he gets back I'll be like, "Who are you and what are you doing in my house and really, really? You expect me to do that laundry?"

Right now he's over at a mechanic friend's house getting the muffler on the boat patched up or something equally mechanical and I've got supper almost done because he's leaving around eight to go pick up his buddy at the airport who is flying in from Canada. Then they're going directly to the coast with all of their stuff and my house will have been emptied of camouflaged everything and equipment which seems to range from a bow to that hopefully-softened rope to fishing poles to lights to...well, I have no fucking idea. It's just a lot of stuff.
Camouflaged duffel bags full of stuff.
A truck and a boat full of stuff.

But the older I get, the harder any change is for me. I face each one with trepidation and having him gone is indeed a change, although not really. I should definitely be used to it by now. I mean, I'm married to a man who knows approximately when some of his grandchildren were born in relation to whether it was deer rutting season or not.

Well, you'll hear plenty about all of this for the next week or so. Mostly I'm just praying (as if) he doesn't get drowned, eaten by a gator, or lost in Tate's Hell.
By the way. Tate's Hell is a real place.
I also hope that my AC doesn't break down and that no major plumbing, electricity or falling tree incidents occur.
Well, there's a lot of other stuff I worry about too but let's just go with those for now.

Meanwhile, I have four kids who don't seem to mind spending time with me, Jessie and Vergil are coming back on Sunday so I will have the full quota of grandchildren, the new movie theater not too far from my house has opened up and I can, theoretically, eat chicken pot pies for supper every night  that my husband is gone.

In an unrelated topic, I have been listening to Michael Pollan's How To Change Your Mind today and it is fascinating and I'm already trying to figure out how to get into a cow field and score some mushrooms without being arrested.
Stay tuned.