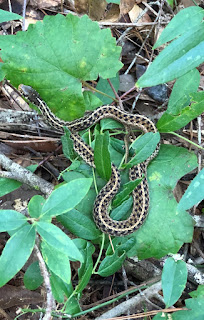 When I stopped to pee this morning on my walk, what did I find woven into the wild grape and similax? A tiny little ribbon snake. His body wasn't as big around as my finger, a mere baby, and he was not disturbed in the least at my presence and very generously allowed me to take his picture. I so often wonder what I am missing as I take these walks, as I trudge and sweat and wish to hell I was done. I often keep my eyes on the road in front of me and I do look up to see the trees and the sky but things like miniature snakes obviously slip past my radar. And it is a fact that we humans have brains which like to see the broad picture and sketch in the rest in order to free us up from constantly having to analyze and register and explain everything our eyes light on. This is of course good in some ways and sad in others. We lose our child-vision as we grow older but sometimes, if we take the time, we can use it again to truly see.

So I survived yet another walk and came home and did a few chores and this afternoon I went and picked up Owen and Gibson at the bus stop because their mama and sister had gone to the beach with some friends.
When the bus pulled up, I got out of my car as I do because I love to see those boys tumble off the bus and come racing towards me for hugs. Owen is a bit cooler with it than Gibson but he still shows me that he's glad I'm there. Gibson, of course, has to immediately share with me everything in his backpack and describe what I'm looking at in his always-outdoor-voice AND THERE IS GOING TO BE AN ICE CREAM PARTY ON THURSDAY and HIS TEACHER WAS BORN IN THE 19'S and HE HAD TWO THINGS HE HAD TO READ TO ME and OWEN HAS CANDY AND IT'S NOT FAIR and so on and so forth.
They buckled into the car and candy sharing was worked out and I told them that I thought we should go visit the Children's which is what we call the thrift store run by the people who save bad girls with the power of Jesus. The boys were ecstatic! We hadn't been to the Children's in forever so it was very exciting although honestly, there wasn't much to be found today. They both ended up with two stuffed toys apiece. A snake and a dolphin for Owen and a Buzz Lightyear and an extremely blue bear for Gibson. We always have a good time there though, sitting on chairs and couches to check their comfy quotient, discussing the toy offerings and deciding what to buy.

When we got home they did their homework and ate various foods for snacks and we went out and found two eggs and Dearie followed us around because that is what she does. We also checked on Violet who is still sitting and then they got to watch some TV.
I'm a terrible grandmother.

Before they left we went over to feed the goats and Dearie followed us around over there, too. 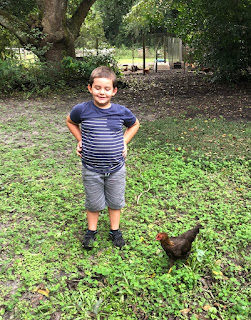 She has such a sweet and optimistic soul. Not unlike Gibson.

So it was a good afternoon and I don't have any pictures of Owen because he was pretending to be a Werewolf and as we all know, it's damn hard to get a picture of a Werewolf. But here are two pictures of Magnolia June that Lily sent me. 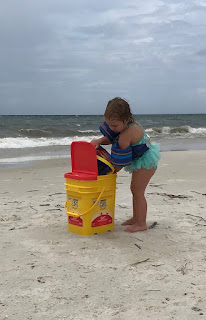 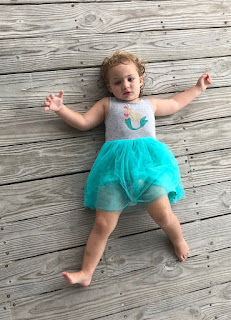 I bet that beautiful little girl slept all the way home.

So that was my day and I have no real actual idea when my husband is coming home. For some reason, I just haven't asked him. He originally said nine days so either tomorrow or the next day, I suppose. I will be glad to have him back but I've gotten quite used to my own company and it makes me so happy to know that he's doing stuff outside that he loves that I'll be a little sad when he has to come back and go to work and deal with all the regular life stuff that he's been able to get away from for these few days. God knows that any man who has to deal with me needs some time off.

In national news, the man who once claimed that he's "the guy who would take a bullet for the president" has now said under oath that he "worked at the direction of a candidate for federal office" for the purpose of illegally interfering in the 2016 election and we can be fairly certain he is not speaking about either Hillary Clinton or Bernie Sanders.
And of course it hasn't been a real good day for Paul Manafort either.
I wonder if Trump is feeling the scratchy fiber of the noose pulling ever tighter around his neck.
So. Resignation? Impeachment? Arrest?

And that's all I have to say about that right now.
Okay, that's not true but it's enough for now.