Yesterday late afternoon before I even wrote my post I had what I suppose was an anxiety attack. Or was it a panic attack? I don't know. But I managed to work through it up until later on in the evening and it got pretty bad. Even though I knew what was going on, it still felt as if I might be dying and I thought back to those times years ago when I was literally living in a state of panic and didn't even really understand what was happening and worst of all- had no medication for it.
Now I do have medication which I rarely need, rarely take, but when I need it I am so fucking grateful for it.
This sort of anxiety is absolutely impossible to explain. For me at least. There is that sense of deep and imminent danger. It may be a focused sense or a nebulous one. It doesn't matter because either way there is no logic to it, there is simply the out-of-control adrenal system kicking one's ass into a cosmos of fear. And of course the body cooperates with the mind by handing you a plateful of physical symptoms to go along with the irrational thoughts which give credence and evidence to these feelings.
Breathe, you tell yourself. Breathe. Center yourself.
And when it's a full-on fuck-you-upper, that shit is just about useless.
Although I probably just don't know how to breathe properly or center myself properly or something which I'm obviously not any damn good at.
But I tell you what- after I took that tiny Ativan and got in my bed and tried to keep my mind busy with reading while the crazy was kicking my brain and I finally felt a slow but real ebbing of the panic, it was a sort of heaven. Well. I can't really call it a heaven because there was no sense of ecstasy or anything like that. It was just a slow cessation of the foil-biting feeling of panic. Which yeah, was heaven enough.

Maurice must have known what was going on. She actually came and got on the bed with me and even when Jack jumped up to take his accustomed place beside me when I sleep, she growled deeply but did not move. This is most unusual behavior for her. And then she cautiously settled up on the pillow above my head and Jack nestled his bulky body by my feet and well, as Rebecca says...The Animal Gods.
What do we do to deserve them?

So. Today has been a day of anxiety hangover wherein I have not gone farther than the front yard to collect my newspaper or the backyard to feed my chickens. I did finish up Maggie's dress except for possibly a little embroidery that I might do on it. I also made a pair of shorts to go under it. And I've spoken with my husband whom I think is getting a little weary of sitting in a boat for hours at a time waiting for a gator to come and chomp down on a piece of beef lung. I think he's still enjoying the beauty of the rivers though, and the wilds they are floating through.
Here's another picture he sent me. 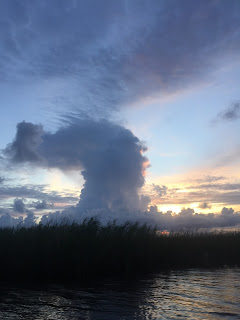 Who IS that man in the sky?

And Jessie and Vergil and their boys made it home safely and I will go and see them tomorrow. How absolutely wonderful it will be to have a good conversation with August, to see if Levon still remembers me and lets me love on him.

This coming up week is the week in which Violet's eggs hatch if any of them are viable. I SO hope they are.

And thank you all for the wonderful answers you gave to me in response to my ridiculous number of nosy questions last night. I was trying to distract myself and you helped tremendously and you also made me smile. And be intrigued.

As Billy would say- I love your guts.