Reunited And It Feels So Good 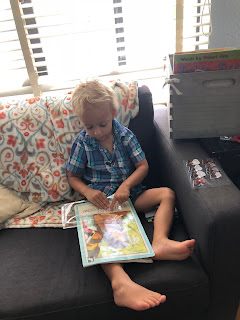 Believe it or not, this is the only picture I took today despite the fact that I spent hours with August and Levon. I think I was just having too much fun being with them and too busy, as well, to really think about pictures. When I got to their house, Levon was asleep but August was playing with homemade play dough and he looked up and talked to me as if we'd seen each other ten minutes ago.
"Hey Mer. I playing with play dough."
I did ask for a hug and I told him I had missed him and he gave me a hug and then we made play dough mustaches.
Golly but it was good to see him.
Of course he wanted to read books. His current favorite seems to be this one. 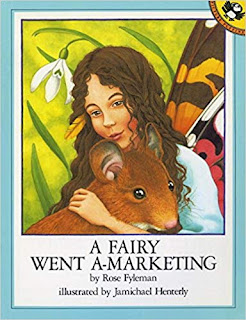 We read it twice and I think he would have been quite happy if I had read it ten times. It's about a fairy who buys a little mouse, a fish, a bird, and then frees them after she hangs out with them for awhile. She also buys a beautiful coat which she wears to dance in the snow in but then she gives it to a frog to keep him warm as he sleeps. It's really quite lovely and it serves August's need to ask why continuously. 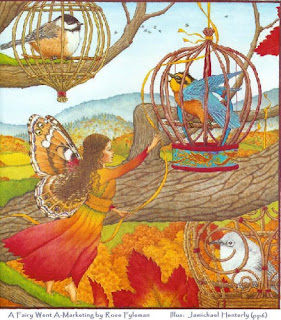 And this stage in a child's development is of course as important as his or her learning to walk.
Which August informed me that his brother is doing.
"What are you going to do with him when he learns to walk?" I asked.
"Play with him," he said.
And he will.

When Levon woke up and I was talking to him, August began to imitate me.
"What are you doing?" I asked him.
"I kitty-catting you."
Jessie and I looked at each other, baffled as to what that meant.
And then it struck me.
"Oh! You're copy-catting me?" I asked.
"Yes!" he said.
He is a brilliant child.

We went and bought chicken feed and dropped off library books and went to Moe's for our lunch. It was a most squirmy boy lunch. August wanted to scoot back and forth on the window sill by our table and Levon just wanted down. That boy wants to go. And eat. Jessie says he yells every time he sees food. He's still loving nursing but he's at that stage which every mother who nursed her child past the age of six months remembers well wherein he'd be just pleased as punch if he could carry the breast off with him as he goes about his adventures. He changes position. He twists, he tries to stand up, he looks around. Nursing a nine month old child is so completely different than nursing a newborn that it's ridiculous. And hysterical.
And yet still intensely satisfying for both mother and child.

After lunch we went to Publix where I was a terrible grandmother. When August asked why he couldn't have all of the cookies on the cookie aisle I said, "Well, if it was up to me, you could but your mother won't let you."
But then I said, "Besides, your mama makes your cookies. And they are better than the ones in the store. Store cookies are only for people who don't know how to make their own cookies."
I'm not really very, very bad. Just a little bit.
Besides, I made Jessie laugh and that made me happy.

While all of this was going on, I'd been getting texts from Mr. Moon. I think the gator hunters are about done with gator hunting and are now ready to move on to fishing. So they were going to go to Lloyd and trade the flats boat for the boat which can go in the ocean.
This felt so odd to me.
I mean, I know he's only been two hours down the road but he might as well have been in Africa as far as I was concerned. He is on a hunting trip and as such, I do not expect to see him until it's over. And I did almost miss him but when he and his friend pulled out of the yard with the big boat trailered behind them, something went wrong in the trailer situation and they had to fix it so at least I got a sweaty kiss from my man.
And then he was gone and I'd doubt that he'd even been here if he hadn't left a pair of britches and a shirt in the wash and a leftover container of barbecued chicken in the refrigerator. And of course a different boat in the yard but to be honest, I'd probably never notice that.

Violet is still sitting on those eggs and the more I think about it, the less hope I have that any of them will actually hatch. Unless Mick got to her before he died or unless Liberace or Ringo are getting it on the down low, they were not fertilized.
We shall see. But for right now, she is sitting as still and as faithfully as the Sphinx at Giza.
Bless her strong and tiny little Banty mother heart.