Revisiting All The Classic Themes

After not having taken a walk in over two weeks I forced myself to get out there this morning. I've had good excuses NOT to walk. Rain, mostly. And I was gone to Roseland for a few days and no, I didn't take my walking shoes because I knew that all of the walking I was going to do was going to occur mostly between the house and the dock on the river. And I was right about that.
So I rustled up my walking gear and put it all on and told myself that I'd only walk two miles, just two miles, come on, anyone can walk two miles, that's nothing, etc. etc. etc.
I talked myself into making it three miles because what's one more mile? Huh? Nada. And I did it and I hated every step of the way.
It's just so fucking hot and humid. I know you're tired of me whinging about this. I'm tired of me whinging about it. I'm a lot more tired of living in it.
Later on this afternoon I went out and picked some black-eyed peas and cream peas and I felt like I was going to die, like my internal thermometer had been set at thermonuclear and also I got ant bit and it was all so horrid that when I saw a giant Georgia Thumper grasshopper I didn't even try to stomp him but just let him go on about his business which is the destruction of vegetable plants.
"Eat everything!" I yelled at him. "And then I won't have to mess with this shit!"

I just feel completely disconnected from myself lately. I don't even know who I am anymore. We all tell ourselves stories about who we are but lately I've been feeling like I don't even have the energy to tell these stories, much less act like I believe them.
I might even just go ahead and put on the polyester housecoat and sit on the front porch with a bottle of gin and start screaming obscenities at everyone who goes by my house.
Not really. I'm afraid of my front porch right now. You should see the damn spiders.

The other night I was on the back porch and realized I was looking at the largest dragonfly I'd ever seen. I went and got my husband to show him.
"Wow!" he said.
It really was big. 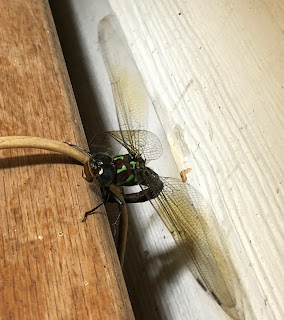 This picture does not begin to show the gigantic proportions of the thing.
We decided to try and gently catch it to let it outside.
That insect, confusing our concern for malicious intent, bit us.
Yes. A dragonfly bit us.
I didn't know that this was even a possibility but having just spent seconds on in-depth google research, I see that it is.
We did get it out where it flew into the night, supposedly, but within a few moments, it was back on the porch.
"Deal with it yourself," I told the motherfucker.
I guess he or she did as I haven't seen a corpse although it's possible that Maurice ate it.
Crunch. 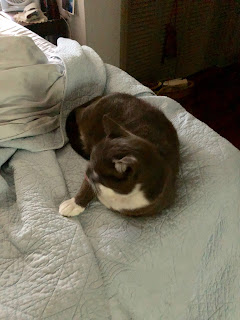 He did not move from that spot on the bed from 11:30 last night to 2:30 this afternoon when I forcibly forced him off in order to make the bed.
What's up with that?
I heard today that male lions "relax" for 20-22 hours a day. I guess Jack is just channeling his inner lion although actually, I had no idea that he would voluntarily go that long without eating.

Isn't this a fascinating blog post? Don't you wish I'd write more about religion or politics? Or at least sex, drugs and rock and roll?

Okay. I will.
I have no religion.
Politics suck.
Keith Richards.

See what I did there? Keith encompasses all of sex, drugs, and rock and roll. Just in case you didn't get it. 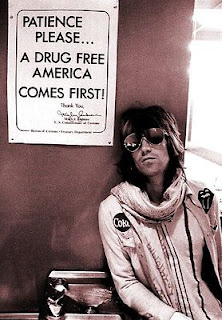 Ooh boy. I can't wait until Owen starts reading my blog. And the poor child thinks he knows me now.