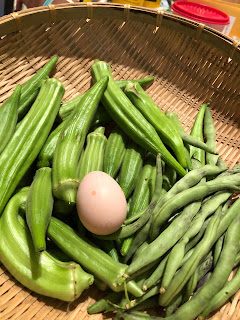 That's today's pickings of okra and rattlesnake beans and one new maiden egg which some inexperienced hen laid right by the back steps. Do you suppose the urge to lay took her completely by surprise? I have no idea. But I am pretty sure that I will never again plant any beans other than rattlesnake beans because they just don't quit producing. I've got about five sad looking little vines left climbing the fence but they're still giving me beans. Tonight I'll cook those with some of the okra and tomatoes and onions and they will be delicious. Last night I cut a bunch of okra in half longways, dipped it in milk with salt and garlic powder and then in flour with more salt and baked it in a hot oven on a cookie sheet until it was nice and brown and toasty and we ate it with a sort of aioli sauce I made with mayonnaise, lemon juice, garlic, and chili sauce.
It was just about the best thing we ever ate.

I've been thinking about Zig all day long. I still do want to write my stories about him. There must be tens of thousands of stories about Ziggy. He was that kind of guy. I asked him recently if he'd ever thought of writing a book because if there are tens of thousands of stories about him, he must have had tens of thousands of stories of his own to tell. He replied that he'd thought about it but he didn't want his wife to leave him. God, I wish he had. His wife wouldn't have left him. She loved him good for over thirty years and he loved her back.
Zig was a big guy. He was big in spirit and big in heart and big in presence and one of the funniest people I ever met but he had a very understated sense of humor that you had to wait for and listen carefully to catch. He sounded sort of like Sylvester Stallone in Rocky but he probably had an IQ that was off the charts.
Here's a little piece in a Montgomery paper that I found online.

So yeah. He's been in my heart all day as I've worked in the garden and done my piddly chores and now this is happening. 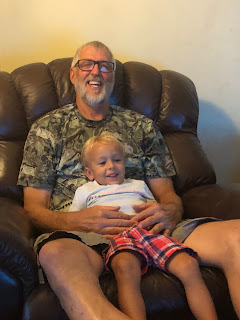 August drove his little convertible out to Lloyd with his suitcase in the trunk.
Okay, that's not true. His mama brought him out in her car with him in the carseat but I still love the image of that boy driving to see us. Now, though, I think of him stopping off to get Maggie and her sitting beside him in the car with her purse clutched tightly to her side.
"Put your seatbelt on, Maggie," he would say. "Safety first."
And of course he would only drive the speed limit.
He fell asleep on the way out here and his mother brought him in and laid him down on my bed and eventually, I joined him and Jack who was sitting guard and laid down to read for awhile. When he woke up he looked around for a bit and I said, "Hey! You're at Mer's house!" and he saw Jack and said, "His eyes are very dark."
Then he ran to find his Boppy.
"I was wondering where you were," he said.
And then he said, "I was wondering if you could watch TV with me."
And so they have been watching TV, eating popcorn and drinking juice. Life is mighty good at Mer and Bop's house. I think that the grandfather has mostly been sleeping but that's okay too.

I just went and checked on them and they're now playing fishing which involves a real rod and a real reel and a stuffed toy fish that they toss out into the hallway and reel in. All of the grandchildren love this game. It's a tradition, just like purple cows when you spend the night and yes, there will be purple cows after tonight's supper.
And then of course tomorrow there will be pancakes. I've already been informed of that.
And after bath tonight there will be lots and lots of books.

It's still summer here. It is very hot and very humid and fall is nothing but a tiny breath of cooler, dryer air in the early mornings. We yearn for relief knowing that it will come, just as the hurricane lilies will be breaking the ground any day now. I noticed today that the camellias are starting to form their tight, small buds which will open in glory this winter, and the squirrels are up in the pecan trees, taking one bite out of each green nut and throwing them down with great glee onto the tin roofs of the pump house and the shed.
This is how it is today in Lloyd, Florida, as the summer fights hard not to give up its grip, as the okra is over six feet tall and still blooming and producing, as the pecans on the tin roofs sounds like small bombs going off and as a small, very blonde boy laughs with his grandpa and is happy to be here.
My heart swells.