It was raining this morning when I woke up and I'm pretty sure it rained through the night. When I went out to dump my compost this morning, the garden looked happy as a garden can look, bright and green and thriving. It wasn't long until the sun came out and every cloud disappeared, as if someone had come and swept all the cobwebs away, revealing a ceiling of lapis lazuli.

It was my day to pick up Levon and August and before I had to leave the house I got a few things done. I took the trash and was surprised to see a new employee at the garbage depot- a woman!  There was another woman who used to work there a long time ago. She was small and white and as butch as they come. I had a little crush on her. This new lady is younger, Black, and looks big and strong enough to tote a washing machine if necessary although I imagine the smaller lady could have too if she'd set her mind on it. She was like a wire but a wire can be strong.

Next I went to the post office because it's on the way home and there was a man with what I would call whiskers, not a beard, who was wearing a pair of overalls not unlike the ones I myself was wearing. This made me realize that not only do I need a life, I probably need a wardrobe. When I was leaving the PO, the whiskered man said to me, "Nice fashion statement!" I sort of laughed. "You too."

So I went and got Levon. They know me at the school now. I walk up and they say, "Levon?" and I say, "Yep," and they send for him. A mother handed me a little gift bag for him and I held on to it until we got to the car. Inside of it were about seven different types of candy including a ring pop and a candy bracelet. I handed it over to him and told him he could have one piece of candy. One.
There was also a little bag with a dreidel, four chocolate gold covered pieces of gelt, and the instructions on how to play the dreidel game. I had never played the dreidel game, didn't even know there WAS a dreidel game. But I do now and I have also played it with a five year old who, due to our loose interpretation of the rules, won almost all the change in my wallet.
Oh well. He got neither my pesos nor my Cuban CUC.
I read him the Richard Scarry book I'd bought, "The Best Christmas Book Ever," and although it probably is not the best Christmas book ever, it was calm and soothing and all is merry and bright in Busytown. At the end of it, there was a page with the words and music to Silent Night and of course Levon wanted to know what that was and so I sang it to him, very slowly and as sweetly as I could, and he said, "That made me sleepy."
Well, shit. It made me so sleepy that I offered him my phone to play Monument on and I fell asleep cuddled up beside him on the couch. After about ten minutes he tapped me on the shoulder, handed me the phone and said, "You have a phone call," and indeed I did. It was Mr. Moon reporting in from Tennessee. After we talked to him I asked Levon if I snored and he said that yes, I did. I asked him to demonstrate what I'd sounded like, which he did, and I'm sure he got it perfectly. I remember once his mother when she was a little girl, telling me I snored like a dying moose.
No wonder my husband loves to go off to distant lands and places so much.

We went and got August and when he came out he hugged me hard and then Levon put his arms around both August and me and it was the best.

When Vergil came out of the room where he works and it was time for me to go, both boys were in the bathroom, Levon on the toilet and August telling him something very important and they barely looked up when I hugged them good-bye and off I went. I left soup and bread for their dinner. Vergil recently had to go up to North Carolina as there was a death in the family and I know he's exhausted so I wanted to at least make their supper easy.

Here are a few pictures I took. I asked the boys to think about certain things and make the faces they would make in reaction to those things. 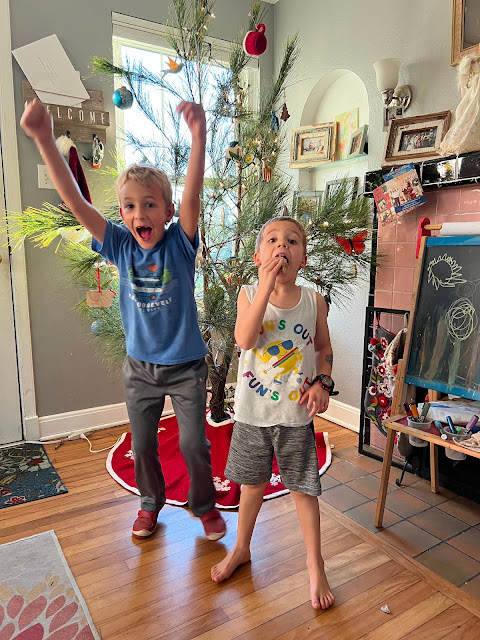 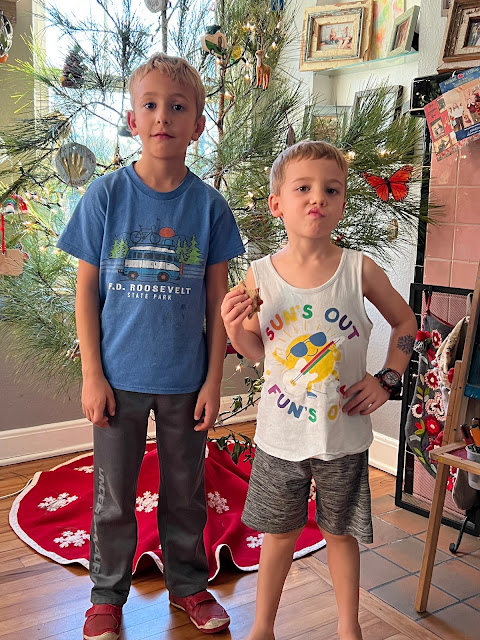 Visions of sugarplums, dancing through your head. 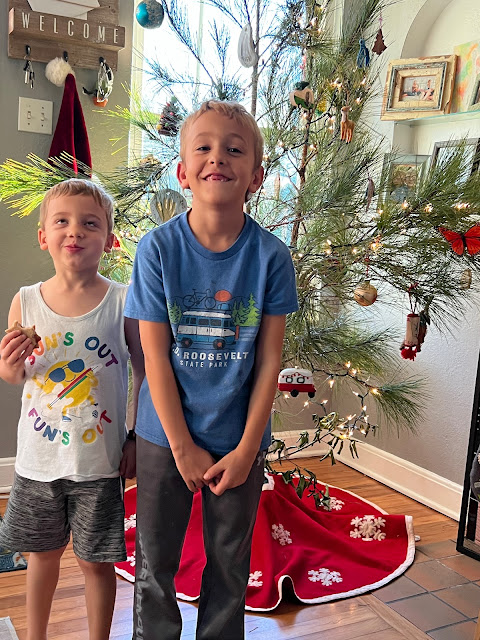 How Santa is going to look trying to come down their chimney.
I thought all of these were very good and accurate reactions.

I love their little Christmas tree. There's a part of Tate's Hell State Forest where it is legal to go and cut down a Christmas tree. This is the second year they've done that and it makes for a sweet outing in the woods. It reminded me of all the years I've gone out into the woods (not always legally) in my life and cut down down a tree. In Roseland we could go out and cut a tree by the railroad tracks. Cedars grew abundantly there and eventually they'd come cut them all anyway. Cedars still grow in Roseland and they are another thing that draw me back to the place. I think the first time I ever bought a Christmas tree was my first year as a truly single woman. Hank and May were quite young but already aware of Christmas and its rituals. I was living in town after living in the woods in Lloyd, and in nursing school and there was no way I could get out into the wild and cut my own tree with two little children. So I bought one and then I had to figure out how to set it up and the damn thing did not want to fit into the holder thingee and I almost wept but I knew that this was just one of the things I absolutely had to be able to do on my own and I did and we had our tree.
That was a horrible Christmas. The children got to be with me for Christmas Eve but my ex came and got them on Christmas morning, as had been arranged and I was completely and totally alone. I remember that it was one of the coldest days I could recall in Florida and even now, the memory of letting my babies go off on Christmas day in that freezing cold causes me to tear up. As I recall, I spent the day deep cleaning the house. Why not? I had the time, there were no distractions, and it no doubt needed it.
Eh. That's life. There are countless parents who have been through the same and who do go through the same and who will go through the same. Another thing that makes me hate Christmas- that deep guilt and sorrow when a family has been "broken" and the children are forced to play their roles in the mess of the agreements which are often more like the burned-off landscapes of wildfires than anything civilized or right, no matter how hard the former partners try.
Yes, well.
It is getting cooler and will be for awhile. Finally, we may be getting our winter. I know that forecasts that range more than a few days in the future can be vastly inaccurate but they are saying that temperatures may be in the twenties on Christmas Eve and on Christmas.
We shall see. But if that is true, I really do need to bring some plants in. I was just out on the front porch with Jessie a few days ago and even I am honestly astounded at how enormous some of my plants are. I have had them for decades and really all I do is water them and let them live their lives on that porch which doesn't get a whole lot of sun and yet, they thrive. I would truly hate to lose them.
Meanwhile, I am wearing one of the cashmere sweaters that Linda Sue sent me. It is so soft, so warm, so comforting. I feel like I imagine a baby chick feels under its mama's wings, snuggled up to its nest mates which truly must be one of the best feelings in the world.
I am grateful, I am anxious, I am sad, I am bewildered in these last days of 2022. And I am tired. Tired enough to fall asleep and snore on the couch next to my grandson in the middle of the day. Life will do that to you.
Love...Ms. Moon
Posted by Ms. Moon at 7:40 PM