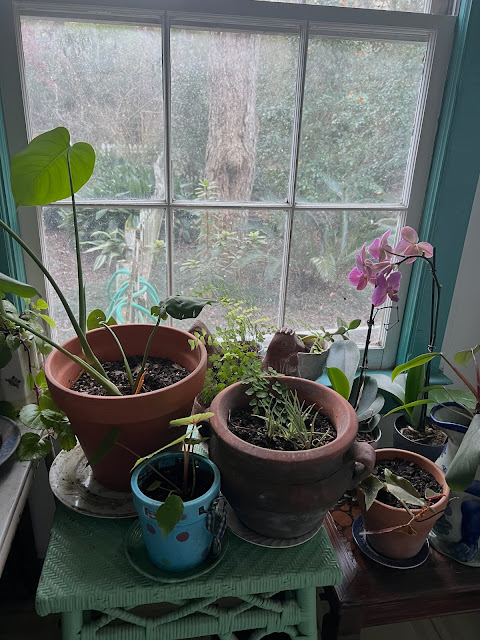 Oh my word but it's been a day. I mean, no one's been in the ER (that I'm aware of) and it's been a perfectly gorgeous day with the bluest sky and it's not so cold but crisp and clear.

I went to sleep last night hoping that the update I was doing on my phone would fix the way my new AirPods were acting which was that they did not want to connect to my phone and when they did, only one side worked. Brand new. I figured that if the update didn't do the trick (does an update ever do the trick?) I would be on the phone with Apple tech and that's exactly how it turned out.

Now from the very first computer we ever got, which was probably the worst computer that Apple ever made- a Performa- I have not been able to handle any problem that has arisen with my beloved magic boxes, as May and I call them. In fact, I feel an anxiety akin to panic when something does not work properly be it a key on the keyboard or an app or well, anything. I do realize this is not logical. Life will go on if my MacBook and/or my phone are being weird and that they can be fixed and if all else fails, replaced. I suppose I have developed sort of an attitude of anthropomorphism towards my technology.
Long story short- I stress the fuck out.

So after trying one more time to do a fix on my AirPods recommended by not only Apple on their help site, but also on many other help sites and it didn't work, I began the process of getting tech help. Now Apple is pretty good. You can actually reach a human to talk to you fairly easily. Somehow today though, it took me going through all sorts of crap including resetting my Apple password to get to the point where I could get a call from a technician and a lot of that was user error. I admit that. And that too, drives me crazy. I hate feeling like a typical old person who doesn't know how to do the google. I'd like to say right here that we boomers are a mess in many ways but dammit- we have had to learn technology from the start. We were not born into it and when I successfully paired my new Roomba the other day to my internet and phone, I felt quite pleased with myself.
Today was not like that though.

The guy who tried to help me was very patient and kind and spoke English quite well but nothing he tried or suggested made one bit of difference.
"And now you should see a pop-up with your AirPods on your screen," he would say.
"And yet, I don't," I would reply.

This went on for quite awhile. Finally he said he would speak to a supervisor. He was gone for awhile and when he came back he said that all they could do at this point was to tell me to go and exchange the AirPods for new ones.

Earlier in the conversation, he had offered to make me an appointment at an Apple Store so that one of those genius people could address my problem and was that satisfactory? No, it was not, I told him. The closest Apple store is over a hundred miles away. Why we don't have one in the capital city of the state where there are approximately 42 universities is a mystery to me but we don't.

So. I packed up the AirPods and got dressed and went to Costco where they were purchased and good Lord but Costco is the best about returning products. Or exchanging products. That was quick and easy. I did a little shopping, saw Brenda who gave me the BEST Brenda hug and another lady I love there and then I went to the library and then I went to Publix and got what I needed there.

I came home, unloaded the car, and decided to put the new pods on the charger. Also, I could see if they would show up on my phone.
Except that...where was my phone? I could not find it. Not in my purse, not on the kitchen counter, not in my coat pocket, couldn't find it in the car and that is when I really started to panic. We do still have a landline but that thing hasn't even been plugged in in forever so I had to find a phone cord which is ridiculous because there used to be at least fifty of them around here in various drawers, coiled and tangled like hibernating snakes in a cave. I finally found one and had to move the piano away from the wall to plug the durn thing in. Did that. Called my phone and there was no response in the house. I took it outside to the car and Glory Be and Hallelujah and thank St. Anthony and all the gods, including Steve Jobs, because it was indeed in the car, ringing its little head off in the one place I had not looked.

Well. A miracle of sorts. I put away the groceries, punched down the sourdough, made a pot of chili and checked to find that yes, these pods were recognized by my phone just as they were supposed to be and connected without any effort on my part and sound comes out of both ears. So all is well that ends well.

At least for now.

Mr. Moon is home. The grouper weren't biting but he had a good time and stopped and bought shrimp on the way home. He is safe and sound.

It's only going to get down to 31 degrees here tonight and then it's going to start getting warmer. I am glad of that, especially for Vergil's family who are visiting and were hoping to escape the cold of North Carolina for a few days. It should be nice by Thursday.

One more thing- the thought occurred to me this morning as I was going through tech hell that at least my floors looked so very good.
Ralph is a champ!