Rivers, Both Real And Allegorical

Slow gray day here. My man got up early to go fishing out on the Wacissa River with friends long before I got up. They were on the river for hours and he reports that it was beyond beautiful. Herons both great and small, blue and white. Turtles sunning themselves. Water so clear you could see the fish. And of course, the trees. He said he saw a few little cabins today, tucked up beside the water and that he would do whatever it took to buy one of those.
I have always imagined that too. It's still wild back in there, Florida the way it was, with bears and probably wildcats, deer and foxes, alligators, and every sort of varmint that the Baxters in Marjorie Kinnan Rawling's classic, The Yearling, would have recognized. And that water. And those birds. Not just the water birds but everything from mockingbirds to the pileated woodpeckers, so large and showy that they are startling when they show up, second only to the Great Lord Bird itself- the Ivory Billed Woodpecker which has not been definitely identified in so many years that many call it extinct although others spend their lives searching for it, absolutely certain that there are some still around, possibly in Louisiana.
As far as we know, houses and land never come up for sale on the Wacissa. But it is something we could look into.

Mr. Moon brought back a mess of little fishes for me to fry. As much as we love the fish he catches in the Gulf- the snapper and grouper- I think that the sweet fresh water fish may be our true love. They are small and must be cooked whole and yes, there are bones but if you know how to lift them out as a piece, that is not much of a problem. Their flesh is white and as tender as anything you can imagine.

So he had a good day and I've had a blah day. I did laundry, I took the trash, I went to the post office where I discovered that Gibson's Christmas present has arrived. I also got the front cover of one of my New Yorker magazines.
The front cover. And that is all.
I asked the lady behind the counter when she gave me my package, "What's the deal with this?"
"I have no idea," she said and offered no further explanation except that perhaps it had gotten caught in a machine.

Our newish next-door neighbors who have been excellent neighbors so far, have spent the last several days clearing bamboo and brush between our houses. This would be fine except that we no longer have any sense of privacy at all. When we moved into the house it was all overgrown between this house and that and no one has really done much to change that. Besides the bamboo there are trash trees and vines and I've always just considered it a nice barrier, a place for birds and critters to live in. But these people seem to like an orderly arrangement of things and now we can see directly into their yard and I am sure they can see directly into ours. This would not be so terrible except that our bedroom is on that end of the house as is my bathroom. I've had curtains and blinds up in the bathroom forever because the wall that faces their house is entirely window and the wall facing the street also has two big windows in it. I've had a lace curtain up in our bedroom but today I realized that it is no longer sufficient for even the merest attempt at privacy. 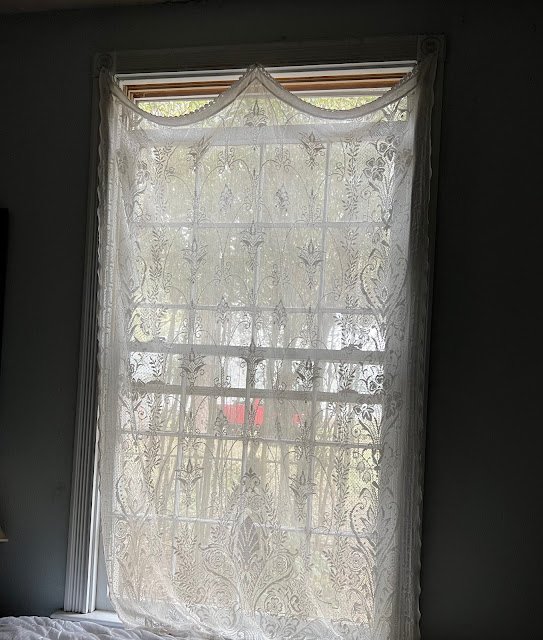 Yes. That curtain is held up with thumbtacks. I am terrible at curtain hardware and although Mr. Moon would gladly put up real curtain rods, I just don't want to deal with it but I suppose I'll have to now. What I did in the meantime was to untack that curtain, wash it because it needed it desperately, and then hem up a piece of barkcloth that Linda Sue sent me to make cover the part of the window that will need covering. 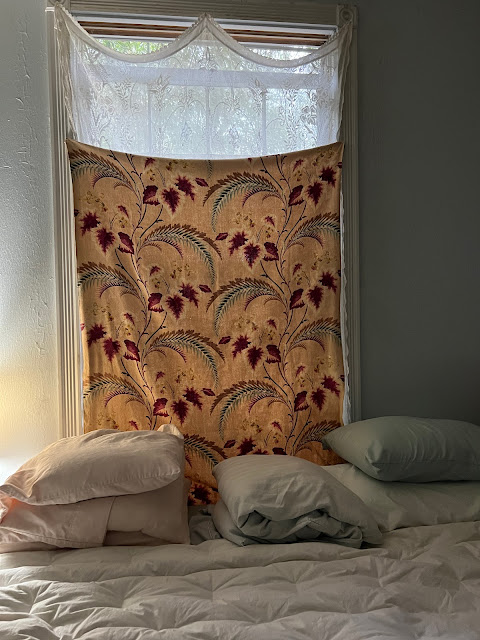 I'll tie it up in the daytime so that Dorothy Anne and Emily and Zippy and all of the other sweet dollies won't die of lack of sunshine and I won't be depressed every time I walk through the bedroom.
Mr. Moon said that he could build us a privacy fence and I know he can because the first thing he ever did when he moved in with me was to build a huge, sturdy wooden fence around my backyard which I still tease him about. I don't think one needs to call on Dr. Freud to suss out the meaning of a very tall fence built around me.
So yes, he can and will build a fence if that is called for but it also occurred to us that perhaps our neighbors are clearing in order to build their own privacy fence in which case- Whoo-Hoo! We won't have to! So we shall wait to see what happens and meanwhile, I do love that barkcloth.
Thank you, Linda Sue.
And the rest of the day has just been a little mending of that, a little picking of this. My garden looks like hell, everything wilted from the freezes except for the garlic and the collards. I think the mustard greens will pull through. I am not sure about the rest of the greens. It's supposed to rain tomorrow and perhaps things will perk up. My artichoke plants which were looking quite impressive to me, have absolutely simply disappeared.
Gone.
So much for that experiment.
A friend of ours is in hospice care in Tallahassee right now. He actually grew up in Winter Haven, the same town I lived in from sixth grade through high school. I did not know him then but knew of him and his brother who was in my grade. I got to know both of the men when I was married to my first husband who had been a friend of theirs so I have known this man for a very long time. In one of those synchronistic things, Mr. Moon has become friends with him and has been for quite awhile. He and our friend Tom have been friends for a very long time and in fact, Tom, and Mr. Moon, and this friend went to a basketball game together less than two weeks ago. He has suffered many, many health problems for years now and a few days ago he had two strokes. I do not think he is responsive so they are just trying to keep him comfortable and at peace. His wife is tending him, and I am sure his daughters are with him.
He went to Viet Nam, this man, and was exposed to Agent Orange and I have to believe that that is a factor in all of the illnesses he has had. I have deep feelings about him, and when I try to talk about him, I choke up.
It's complex. It's complicated.
But at the very heart of it all, there is a place in my heart where he has had a space for so many years and although he always will, there is an understandable disturbance in my psyche. And perhaps this is why I have been feeling a quiet within myself. I feel a waiting.
And this too is part of life as we reach the outer ends of it. Each person we lose reminds us not only of our own mortality but also of how different people have played their own roles in our lives as we have played roles in theirs. As I realized when my friend Sue died, there are parts of us we share only with certain people and no one else and when those people are gone, it is as if that part of us may be gone as well.
I know it's not. Not really. But in another way, it truly is.
Sorry. I'm not very cheerful tonight. But it's Friday and the man has made us a martini and our bed has clean sheets and with the new sort-of curtain in our room, it will be all the more cozy. I am going to fry those fish and I think I might make tomato gravy for the first time in my life to eat on the grits I'm going to cook.