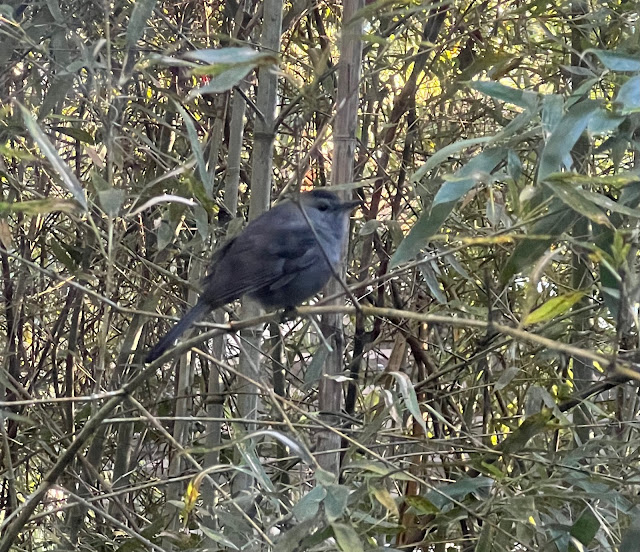 When I got up and went into my bathroom this morning, that little bird was doing kamikaze flights into my window. I suppose it was seeing its reflection unless it just really wanted access to my beautiful bathroom. He (must have been a he, right?) wasn't hitting the window hard enough to knock himself out but he was persistent. And by golly, the bird was still out there trying to figure out how to get in for almost the entire day.
Birds are so smart about some things but honestly- mirrors and windows are something they have not figured out. I've seen mockingbirds try to attack their images in sideview mirrors on cars for days and days at a time.
What an incredibly perfect day it was today! The temperature was mild, the sky was as...well...this. 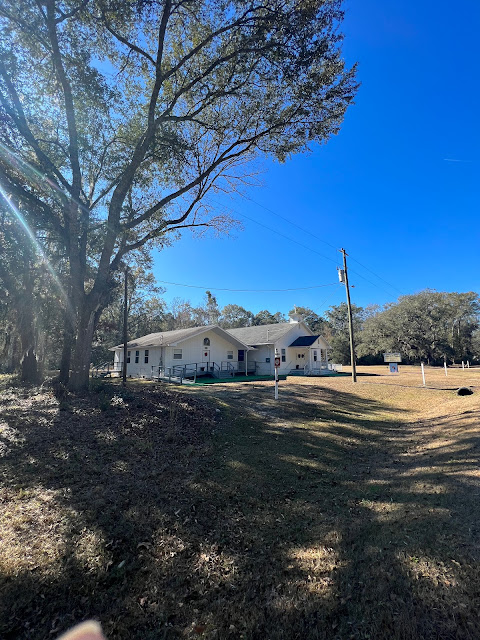 And after I'd walked to the post office I decided that I had absolutely no excuses not to go on a real walk. Y'all- I haven't taken a real walk in probably months. And when I say "real" I mean anything longer than a walk to the post office. But it wasn't too cold, it certainly wasn't too hot, wasn't about to rain, and I had absolutely nothing else I HAD to do.
So. Off I went.
I only walked two miles but my legs are telling me that two miles is a lot farther than they are accustomed to at the moment. I took it slow, too. I am generally a fast walker but at this stage of my unfit life, I know I need to slow my roll a little. I had an interesting experience in that I saw in the distance before me a guy heading down the sidewalk too towards No Man Lord's. After awhile he knew I was back there. I'm not sure why he turned around because I certainly wasn't close enough for him to hear me but he did and by the time he reached NML's and turned in, I had almost caught up with him.
He said to the two guys in the yard- That woman walks fast for someone her age! He meant for me to hear it too and I was not insulted.
"I wasn't walking fast," I yelled, as I went past them.
"That wasn't fast? You almost passed me!"
"You were just strolling," I said, and went on by.
He was too. Just strolling. Taking it easy on a very fine day.
It did me good to get outside and do that. Nothing much has changed. Well, that's not true. NML has a few new signs. One of them says, "Den of Thieves...$$$". Not sure quite what that means but if it implies that people with money are evil then he is definitely the purest man in the county. Bless him.
And another HUGE thing I noticed is that my next-door neighbors have finally taken the Trump signs out of their yard. They have been there since at least 2016. Perhaps 2015. There's still a DeSantis sign in the yard but Trump is gone.
I am taking this as a good omen as applies to Trump. Not so much about DeSantis. Those of you who do not live in Florida have no idea how evil this man is. And besides that, he's not stupid at all.
I sent Ralph back out to vacuum today. Mr. Moon and I were entertained all day long, watching him go at it. The poor thing just cannot get into the kitchen. It tries and tries but it just can't. It is such a persistent little fucker but honestly (and don't tell him I said this) he's not brilliant. He may be the smartest robot in this house but he's not the smartest robot in the world, I feel quite certain. He did make me a map. This is what it looks like.

How does it look?
It looks like...someplace I've never been. Supposedly this is a rendering of the spaces I live in and yet- well, as Mr. Moon said, "It looks like Leon County to me."
Theoretically, I can now label all of the rooms and spaces so that I can direct it to go clean a specific area. This is going to take some work. I have never been any good with maps. My spatial abilities are nil. But I should be able to do this, don't you think?
And in admitting this, I think I should probably apologize to Ralph who can vacuum AND map at the same time.
Mr. Moon went out for a little bike ride this afternoon, inspired no doubt by my walk.
Or not.
But he sent me this picture. 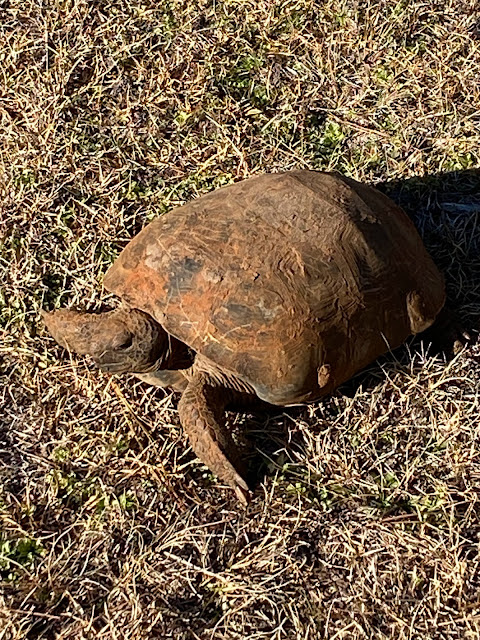 That is a gopher tortoise. One of my favorite critters. This one has obviously spent a great deal of time in its burrow which has been dug into the red clay dirt of our area. I just love those things. They seem so primeval and wise to me and wear that reptilian expression of pissed-offedness that iguanas also have. Disdain for all, especially humans.
I tried out my new pruners today. I trimmed up a few areas in the most casual and desultory way. They are amazing! I love them. I can't wait to try out the loppers. Perhaps I will tomorrow. Both of the Canary Island date palms have fronds that need removing and I will find great satisfaction in snipping them off. The good news in palm world is that my cabbage palms or sabal palms, appear to have survived the cold nicely. 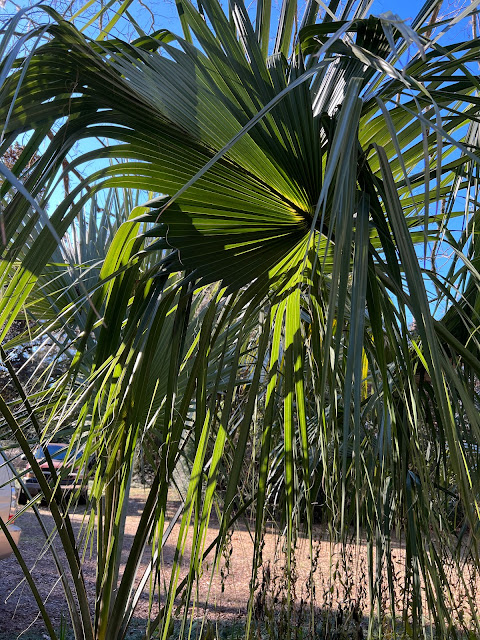 Now I'm going to go cook some shrimp. I am still not quite sure how I am going to cook them. Remember that scene in Forrest Gump where Bubba lists all the ways you can cook and eat shrimp?
Bubba was absolutely correct. Shrimp is the fruit of the sea.
Love...Ms. Moon
Posted by Ms. Moon at 6:11 PM