I Did Indeed Get What I Need

Believe it or not, I have not taken one picture today.

Well, that's a lie. I took a picture of some information on the CDC website to send to my husband about getting the covid booster and flu shot at the same time which I was hoping to do today. Glen said that he'd heard from a doctor he hunts with that it's NOT a good idea but the CDC and other medical sources online said it was fine unless you're getting the high dose flu shot which I figured I was not getting but when I got to Publix at the appointed time to get the flu shot and asked if I could get the booster at the same time they said, "No," because I needed to make another appointment for that.

"Can I make an appointment for like three minutes after I get my flu shot?" asked Ms. Smarty Pants.
"No," they said. "No same day appointments."

BUT, when I got the flu shot, I was told that it was indeed the high dose one because that's what they give all us old people over the age of sixty-five. And that they do not recommend getting that one and the covid booster at the same time but should spread them out over 72 hours. And then I felt really bad because the pharmacist was the only pharmacist and only immunizer there today and they were suddenly slammed with people waiting who had made appointments, and although I hadn't made a scene or anything when I was told that I couldn't get both shots today, I had obviously felt like that was ridiculous and so I tried to be as nice as I possibly could and said, "Thank-you," about ten times and did not complain about the shot hurting although it did.
But just a little bit.

So then I bought two turkeys, the Greenwise kind. "Greenwise" is Publix's house brand of foods that are mostly organic and don't have fake colors or flavors in them and the animal products are not given hormones and antibiotics, etc, etc. I always get the Greenwise chicken and it is so superior to the regular chicken and so for Thanksgiving- why not get the Greenwise turkeys? I asked Mr. Moon today if he would like to smoke a turkey for Thanksgiving and he said he would love to so one of the birds will be his responsibility and I will roast the other one because I basically only want one main thing from Thanksgiving and that's stuffing (not dressing) and you have to have a turkey in which to stuff it. I also bought the cranberries and an orange to make regular cranberry sauce and also the cranberry/orange/pecan relish which is actually my second favorite thing about Thanksgiving. The flavor of it is amazing but the colors are even better.

I'm glad I got those things bought because I've been having dreams about it being the night before Thanksgiving and I have not yet bought any of the food, including turkeys, to prepare for the dinner and the only store open is a Winn Dixie that has almost nothing in it. Like, maybe some celery and boxes of antihistamines.

After Publix I finally went to Joann Fabrics and got the material I need to make Maggie's name blanket. I was not happy at all with the choices but what can you do? I have a love/hate relationship with Joann because of all the seasonal crap they bring in and we all know how I feel about Christmas and it already looks like Santa's fucking workshop warehouse in there but I also love things like embroidery thread and markers and pens and paints and dyes and scissors and irons and knitting needles. I bought some of those, in fact. The knitting needles. And oh yes- embroidery thread.

And then I came home and tended to the pinto beans I started soaking last night and began cooking this morning along with the bread dough I made this morning after feeding the starter last night.
God, I love pinto beans. I truly love most beans but pintos are a primal and at the same time, celestial food to me. They are one of the first things I ever remember eating and I'm sure that when my mother made them she was broke and beans were all we could afford but damn- they were so good. And they still are.

So okay. Here's a picture of Jack that I took last night on the new chair. 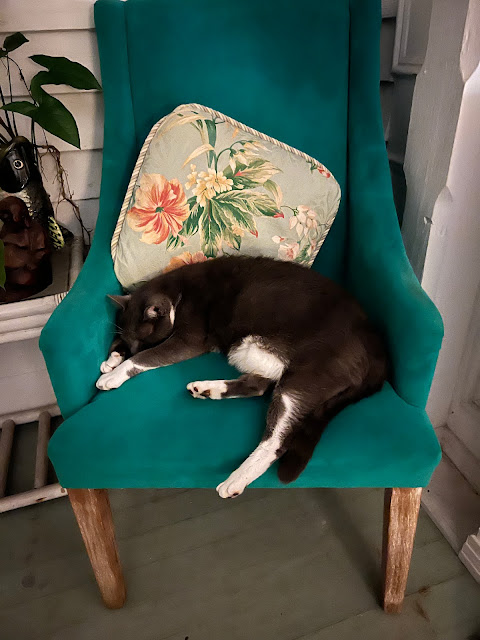 It is officially Jack-approved. I swear- this morning when the sun was shining on the porch lighting that chair with glory, it reminded me of emeralds and one of the many colors of the sea in Cozumel on a clear day and the Emerald City, too. It's the most cheerful thing you can imagine.
It just purely makes me happy.

It's going to get chilly tonight and I am so grateful for a warm house and various ducks and ducklings to sleep under, not to mention that chonky cat who, after getting all of the petting I'm willing to give him, settles right up against my hip and we both fall asleep as warm and cozy as a woman and a cat can be in a bed when the man is away. Which is pretty darn warm and cozy.