The Dive Bar Origin Of A Love Story 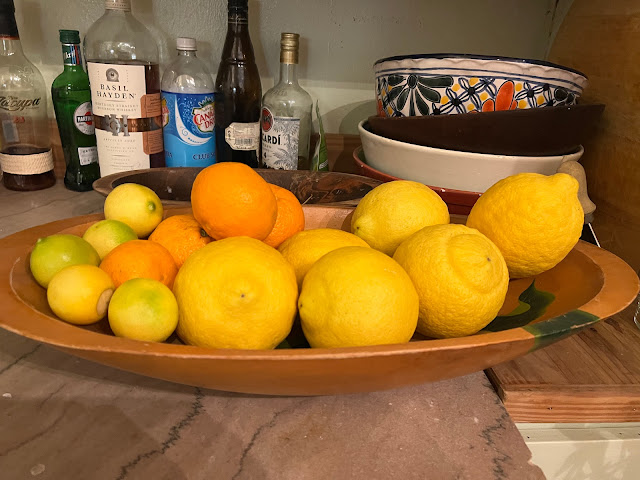 I took that picture last night when I was almost finished cleaning up the kitchen after I'd boiled the turkey bones and picked the meat off of them and strained the broth for soup or whatever. It was a very long day but I had nothing big enough to put those turkey skeletons in except a pot to cook them so that was what I did. No turkey bone shall go to waste around here! And now that's all done and I am glad of it.

The fruit came from Jessie and Vergil's yard where they have created a sort of small urban orchard on the lot their house sits on in a neighborhood in Tallahassee. Vergil made up a goodie bag for every family who came to Thanksgiving. They are drowning in fruit! It's so very cool. Perhaps I should make marmalade.

I slept until 9:30 this morning. I am not surprised but I was surprised to hear that Mr. Moon did not get up until 9:00! He sure didn't wake me up when he got out of bed. He is always up by 7:30 at the latest but he, too, worked hard yesterday and it was heavenly for us to get good rest.

And I've done little today. I did the laundry which was mostly made up of tablecloths and napkins and dishtowels. Easy laundry, that. And of course the sheets because it is Friday and sheets must be washed on Friday or else...I don't know. The devil will get me? I won't go to heaven? My entire life will be upended?
Oh, who knows?
It's not the worst symptom of something like OCD, I suppose.

Thirty-nine years ago on the Friday after Thanksgiving, I went out to a bar in Tallahassee. There was a story about why I went that specific night to that specific bar but I'm not going to go into it because it really does not have anything to do with what followed except that I WAS in the bar that night and if I had not been, I might be living a very different life now.
The bar was called Kent's and the only people who remember it are people of a certain age, that age being old. It was a dive bar for the most part but beloved. My ex and his band was playing there that night which is not why I was there. Oddly, one of his bandmates then was a woman who has been his wife for many years now although she was still with her first husband then.
Lots of portent there, I suppose.
Anyway, I was looking cute that night. I was! Really! I had borrowed a sweater from my friend Sue (who was also babysitting Hank and May) and it kept falling off my lovely shoulder. I was not wearing a bra. I have never like bras.
So, there I was at the bar, sitting with my ex's sister who was a friend of mine, waiting for the thing that I was at the bar for in the first place and that never did happen but something else did. Glen Moon was there and I knew him by sight, barely by name. I believe I thought his name was Gary. But he saw me with new eyes that night and the sweater and my shoulder must have been more than he could handle and he asked me to dance.
Now, you have to understand- Glen Moon is 6'10".  And lovely in all regards. But tall. Too tall, almost. I am 5'4". But what the hell? I love to dance and so I danced with him and then there was a slow dance and he indicated that he'd like to continue dancing with me and I looked up and said, "Really? You want to try this?"
I mean, I barely come up to his chest.
But yes, he did, and so we did, and before the evening was over he was making very broad comments about not having had Thanksgiving dinner that year and how much he would love a turkey sandwich and so forth and so on, obviously trying to wrangle an invitation over to my house but I was not having it. Nope.
But when Glen Moon wants something, he does not back down. He accepted the fact that he was not going to be coming over to my house for any sort of sandwich that night but within a few days, he managed to get himself invited over for a meal anyway and I made turkey flautas from a recipe that my friend Cindy had given me. They are delicious although they are about as Mexican as a Russian Wolfhound.
So he came over and he ate turkey flautas and no, he did not get invited to spend the night but within a shockingly short amount of time I knew that he was going to ask me to marry him and he had asked if a high shelf in one of my closets was being used which it obviously was not, so that he could keep a few things there and then he asked if he could move his bed in to replace my double mattress because it was too short for him and he wasn't comfortable on it.
Sigh.

Tonight I am going to make turkey flautas. They will be as inauthentic as the first ones I ever served him were. And hopefully as delicious. And our beautiful, thirteen-year old grandson Owen will be here to eat them with us and is spending the night so that they can get up early to go fishing out on the gulf.

Funny how one thing will lead to another, isn't it?

And that is the story of today, which is an anniversary of sorts. I wonder if Mr. Moon thinks about that first night he asked me to dance when he makes himself a turkey sandwich.
I do. And I think of that sweater and of Sue and of dancing with that almost too-tall man in front of a band which my former husband was the guitarist for and how I had no experience with a man that tall- a basketball player, an athlete for god's sake. A man who carried himself with such confidence, and who smiled way more than anyone I'd ever met, who appeared not to have one iota of angst within him.

I'm so very glad I danced with him.