Love And Food, Food And Love 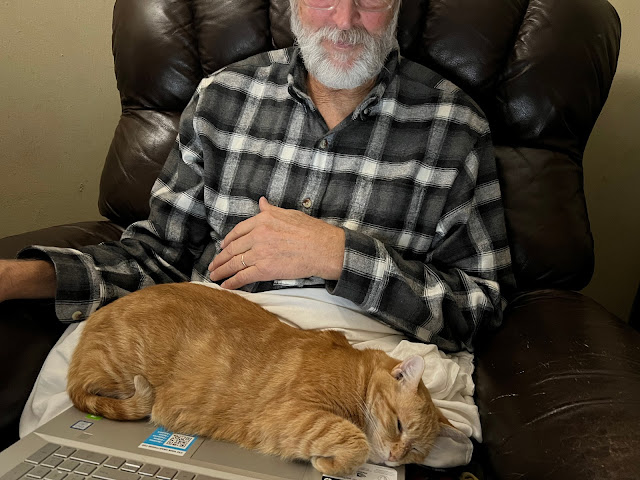 Sorry I cut off Mr. Moon's head there but the focus of the picture really was his lap cat. She is so happy he's home. Maurice hasn't even bitten us in quite awhile. On the other hand, Jack bit me last night as I was just casually petting him while he sat beside my laptop. The only reason I can think he did this was because he wanted me to shut it all down and come to bed.
Cats.
Who knows?

God I feel old today. SO old. And all I really did was exactly what I usually do before ten o'clock on a normal Thanksgiving morning which was to boil the giblets with celery and onions and bay leaves and spices to make the broth that goes into the stuffing (dressing) and gravy, and to make the stuffing when that was done.
Isn't "giblets" a nice word for "internal organs"? I think so.
I made a lot of stuffing. I hope it's enough. I think Rachel is making vegetarian stuffing too so there will be plenty. It's so funny how we all make our stuffing so differently and I would not dare to deviate from my usual recipe. Of course there's not really a recipe but I use the same ingredients every year, one of which is Pepperidge Farm stuffing mix which is probably a sacrilege but that's what my mother made and I love it. Because of this preference, I completely understand people who want cranberries out of the can instead of fresh ones. Tradition is everything on Thanksgiving. I do make cornbread to go in the stuffing too and this year instead of baking a dedicated skillet of it, I saved leftover cornbread and dried that out. It has corn in it along with some onions and jalapeños and a little cheese so that is different. The stuffing also has two chopped up hardboiled eggs, some giblets, smushed up celery and onions from the broth, broth, sauteed onions and celery, and pecans in it.
So yeah, I did that and I boiled a bunch of eggs to make deviled eggs and I peeled them and put them in the refrigerator and will complete those tomorrow.

I thought about actually cleaning some today but I disregarded that notion very quickly. I've done some sweeping, especially of the back porch and the steps and tried to clear off some counters in the kitchen to create more room for all of the dishes that will be showing up tomorrow. But that's it.

Mr. Moon has been busy too. He got an appointment to get his MRI this morning and he went off to do that and then, because he was disappointed in the experimental air-fried chicken last night, he BOUGHT A NEW SMOKER (probably the last one for sale in Tallahassee) and put that together and did all the things required to set it up and he is smoking a turkey as we speak. So that will be done tomorrow making one less thing to worry about.

And tomorrow I will stuff the other turkey, get that bad boy (or girl) into the oven, make the deviled eggs, get out pickled green beans and okra and set out dishes for other hors d'oeurves that may be coming, make iced tea, both sweet and unsweet, pick the greens from the garden that I want to cook a pot of, try not to forget to set out the cranberry sauces, and roll out the biscuits and bake them.
OH! And get the pies out of the freezer in the morning and whip the cream that's going to go on them.
I wonder where the gravy boat is.

The kids will help set up tables in the backyard if the weather is good and it looks like it will be. We serve the food buffet-style and everyone gets their own plate so that eliminates the need for table-setting, mostly, but I do want to pick some of the blooming sasangua and make a few table bouquets of that.

None of my china matches, none of my glasses match either. And to be honest, I use a lot of mason jars to drink out of.
God. I am so tacky.
Well, la-di-dah, as my darling Lynn would say which reminds me to set out the rum for shots so that we can throw a few back and say, "Whoop-ay-A!" in tribute to that woman who came over every Thanksgiving morning to share shots with me and maybe a little hallway dancing before she went to her own family celebration.
TRADITION!
And my shot glasses don't match either. Are we surprised?

I got to talk to a dear blog friend on the phone today and that was such a treat. She called me and we laughed a lot. I cried a little too, but that's as much who I am as having no matching china.

I've also taken the trash today, picked arugula for our salad tonight, and made a completely 60's casserole for our supper involving macaroni, Lipton's onion soup mix, tomato sauce, and ground beef. With cheese on top, of course.
It is delicious.

And I'm sad. I shut this door today. 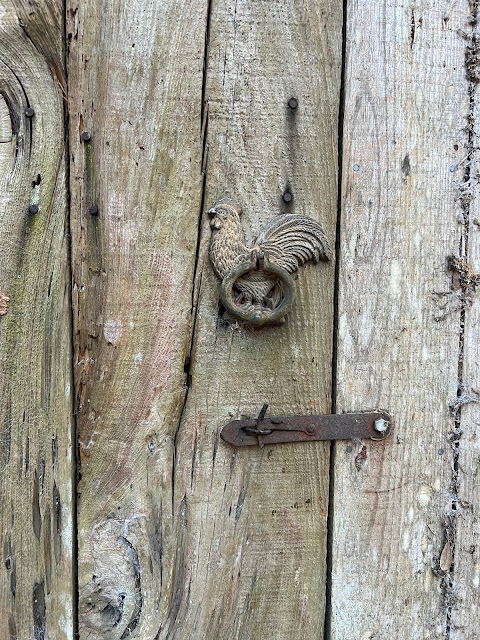 For the very last time.
At least for now.
I can't tell you how deeply sorrowful I feel. And I'm already realizing how many adjustments I'm going to have to make in a life without chickens.
But tomorrow will be full of family and noise and rearranging things in the oven and Hank has made a seven-hour playlist of songs we all love and want to hear and some things change and some things do not and we are all healthy and will feast together and there will be way too much food and so, so many pies and we love each other.
Happy Thanksgiving.
Love...Ms. Moon