Feeling Better All The Time 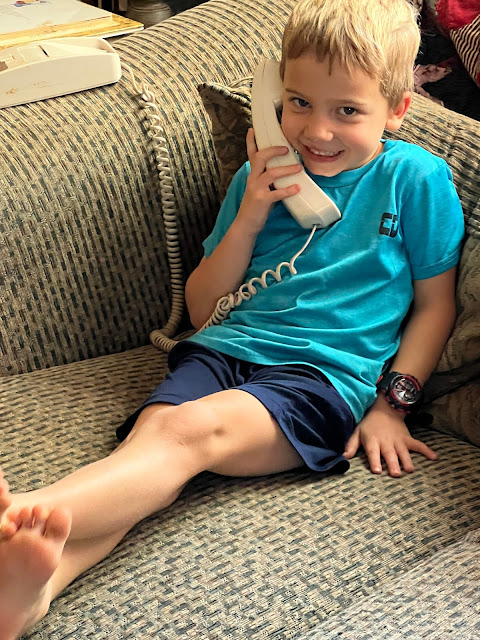 I haven't felt great again today but it hasn't been so bad. As the day has moved along, I've felt better and even gotten a few things done. And stayed out of bed, too!
At one point Vergil came out with the boys to drop off the meat grinder and although August and Levon weren't going to get out of the car, I pled for them to be able to and I stayed at least four feet away from them at all times which is NOT EASY TO DO! I said, "Oh, how I wish I could read you a book," and Levon who was sitting on that love seat he's on in the picture suggested that I could sit on the crack of it while each boy sat on an arm of the little sofa but I sighed and told him that probably wasn't far enough away.
But they figured out what to play on their own. My old plug-in phone was sitting there on the love seat and Levon was in charge of that while August got on one of the trikes in the room which has a good bell on it and he would ring, ring, ring and Levon would pick up the phone and say, "You have reached Toys, Incorporated. How can I get your order?"
I loved that.
And they played just like I played with my friends when I was little.
You say this and I'll do that and the script unfolds as it is played. I can remember feeling a passionate joy in that sort of play as a child. We could be princesses or soldiers or Tarzan and Jane or runaway children or stranded cowgirls in a snowstorm or anyone in the entire world and as such, we were free to act as we wanted, a continuing story of pretend and it never got old for me.
So watching the boys play like that was good for my heart and good for my soul.
Just as I was about to make Levon a requested peanut butter and honey and raisin sandwich with the crusts cut off, Daddy said it was time to go home and so they both got a banana and some juice.
Their visit was definitely the high point of my day.

I finally gave up and took the piece of fabric that has the letters of Maggie's name on it off of the backing which would not stop puckering up no matter how careful I was with it and that probably took forty-five minutes with the seam ripper, carefully taking out one stitch at a time. But it's so much easier now to embroider around the letters and I can even use an embroidery hoop which- oh gosh! who knew! makes for much more controlled and tidy stitches. Not that all of the stitches are tidy but more of them are. And when all of the embroidery is done I can resew the whole panel together and sew that onto the quilt. I've been making these things for over forty years. You'd think I would have figured it out by now but no. Not really.
While I picked stitches I listened to a podcast, sitting at the table on the back porch where the sun was shining brighter than any lamp in the house could have. It was a cheerful thing to see the sun again after so many days in a row of it hiding behind clouds as gray and dense as a thousand years of spider webs covering a window.
And when I began embroidering again I watched a movie on Netflix that I thought was going to probably be horrible but the trailer had such a sparky, funny thing going on with excellent writing and a terrific bit of acting that I thought- eh, what the fuck? I'll give it a shot.

And it was surprisingly delightful! It's called "Friendsgiving" and is on Netflix. Such movies are always formulaic, of course, and this one had elements of all of those but it popped out some definitely different storylines. So I enjoyed that. A few days ago I watched another Rom-Com-ish movie, "People We Hate At The Wedding" and I was vastly disappointed in that. The performances were okay but it was...meh.
Sometimes all's-well-that-ends-well just is not good enough.
Know what I mean?

And that's that. I've done laundry, made a loaf of bread, cleaned a toilet and a sink, picked some greens, and figured out a quilt problem. So the day hasn't been a total waste, I guess.

Onward and upward! Time to heat up the soup!