It is a good thing that I'm being forced out of my home, my county, my life, tomorrow, for a little adventure. I have felt so inert the last few days.
Or weeks.
Maybe months, I don't know. But this trip to St. George with the ladies will get me off my ass and out of my head, hopefully.
I've been in a little more pain than usual, I think. Or it could just be that I'm not busy enough and am paying too much attention to it. After a certain age I think most of us experience one sort of chronic pain or another and I do admire those who do not speak of it but I am not one of them. And chronic pain can wear you out and wear you down, even if it's low-grade. I am far more apt to notice now how older people often dip and roll with each step and I remember a line in a book I read a very long time ago wherein the author said that old people walk like that because they hurt. And it's true.
We are doing the slow dance of pain.

I think that pulling out these memories has been hard on my psyche. The period of my life I've been discussing is not one that I've spent a great deal of time analyzing. I guess with everything else that has happened in my past, I've just never given the whole Denver/Tallahassee transition a great deal of thought. I have thought about it and it's been obvious to me that it was absolutely a formative period of my life but until I really started talking about it, pulling up and out those memories, I didn't realize how emotional it all was.
Well, that's not entirely true. I did. I do.
I look back on images of me sitting in my dorm room with snow falling outside, listening to Joni Mitchell's Blue, crying and embroidering a denim shirt for my ex-boyfriend which he eventually gave to his new girlfriend.
And that sounds so cheesy and it was but it was also the beginning of the depression that I now realized I suffered for at least two years. It was a period of time in which there was absolutely nothing that brought me joy. Nothing. Oh, sure, I could appreciate and even enjoy certain people's company and different experiences but there was always the veil of grayness over everything.

Well, I went back to Winter Haven for a Christmas break. I was already living with the drug dealer by then and he gave me a few hits of very good acid to take with me. Being back in the family home for even a few weeks was horrid but I managed to be out of it most of the hours of the day and the night and I hung out with my friends and I had started up a flirtation with a boy I somehow knew on another school break and it was at this time that we got together. His best friend from childhood was another guy I knew and they played music together whenever they had the chance. D., the guy I got together with was a violinist, going to music school at FSU. The friend was a guitar player and spoiler alert: I ended up marrying HIM but that wasn't for quite awhile.
So that whole vacation we were hot and heavy and it was emotional from all angles- being back in the house of horror where the stepfather lived, being around the ex-boyfriend whom I was still bonded to in my heart of hearts with his new girlfriend who was sometimes wearing that shirt I'd embroidered in my grief and despair, seeing the people I loved and had missed so much and yet, this little flame of true interest and sweetness.
I think back on it and it was overwhelming in so many ways.
D. and I dropped the acid that I'd been given right before his mama's annual giant Christmas party and that was definitely an experience I'll never forget, especially the part where I had an entire conversation with a woman who had not only been my sixth-grade music teacher but also my assistant Girl Scout leader from sixth grade through high school.
I do not recommend this combination of drug-doing and holiday conversing but it was certainly interesting and obviously a memorable experience.

At some point during the holiday, I had told D. how much I hated Denver, how unhappy I was there and because he was such a nice guy and because he never, ever, in a million years thought I'd act on it, he said, "Well, you can always come live with me in Tallahassee."

So that was the Golden Ticket. That was all I needed to hear.
I flew back to Colorado, finished a two-hour final exam in ten minutes because I knew nothing at all about the subject (I had lost any interest in my studies I may have ever had), went and withdrew from school, told the drug dealer I was leaving to go live in Tallahassee, Florida with a violinist, told my mother I had quit school and was going to go live in Tallahassee with D., went to Triple A and got a Trip Tik with my route marked on it (remember those?) and as soon as the snow melted enough for me to leave, I was out of there.
My drug dealer boyfriend had already found a replacement for me (she even looked a little like me) and a friend of his had sort of taken custody of me and the night before I left he took me to a movie and was so gentlemanly and so kind and he gave me a few joints for the road. I will never forget his kindness.

Nineteen years old, driving halfway across the country in a green Ford Capri with the two parakeets, the pressure cooker, the shitty stereo, my Joni Mitchell records, and my rocking chair. Also a blue corduroy comforter that I sure do wish I knew what happened to. I loved that thing.
The farthest I'd probably ever driven in my life was about fifty miles. Once.
And yet, being nineteen years old, I had no doubts I could do it, and for a time on that journey there were bright flashes of light that pierced the gray veil and when I got to the more southern parts of the country and started seeing little cabins in the middle of fields and great green groves of trees, I was convinced that I had made the right decision.

And looking back, I guess I had.

Here's a picture of August from today. 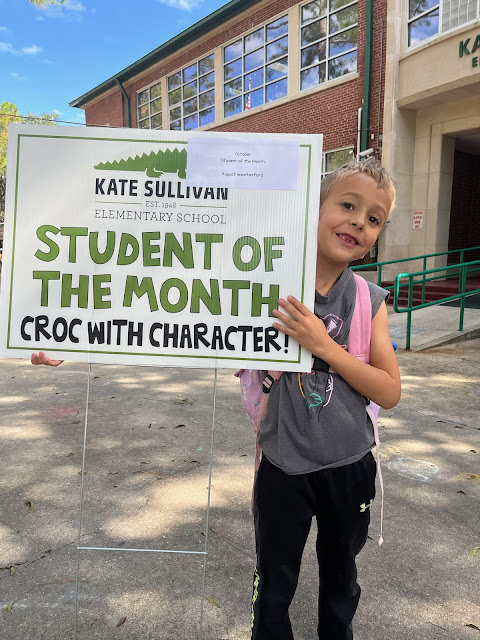 I love that! Croc With Character! Ain't that the truth?
And as you can see, he's pulled a few more teeth. Perhaps he will be a dentist when he grows up.

Yes. I made the right decision.