Waiting On My Sweetheart 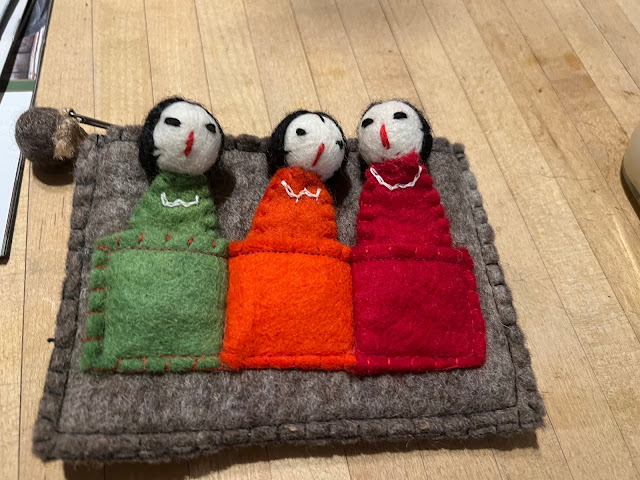 So I went back to the My G-Word Soul Boutique this afternoon after I'd taken the trash and and gone to the post office. I have to say it did look better in the store than it did on opening day. I think she's added some rugs and there are Christmas decorations and a little more stock although the only new items I saw that were the least bit interesting to me were some glass bowls whose bottoms had been molten (?) to cradle into some very pretty wood pieces. Not sure if it was driftwood or not but something like that. I would have bought one but what in hell would I do with it? There were also a few more "artistic" things like painted clam shells and! some non-painted clam shells labeled as "natural shells" for $1.50 each. These shells are abundant on our beaches so I'm not sure who is going to be buying those. I was underwhelmed with it all, frankly. But I did buy that little pouch with finger puppet dolls imported from Nepal via "Ancient Wisdom Marketing."
I do believe I did a blog post once about ancient wisdom.
Knowing me, you will probably guess that I am a bit cynical about ancient wisdom, or at least how the term is used these days, describing anything new age-ish which is probably mostly some weird deviation of cultural appropriation. Don't get me wrong. There were a lot of ancients with a great amount of wisdom but I have a feeling that we've lost most of the important stuff.
But perhaps Ms. Magnolia will like the little pouch for a Christmas present.

The woman who owns the shop had her grandson there today. He seemed to be about seven and was playing a video game on his phone. "Grandma!" he said.
"Yes?"
"I just killed two guys and I got killed."
"That's nice."
He was a cute kid although he appeared to have a cold or something. I hope it was only a cold. After I made my purchase he said, "Thank you for shopping at My Gypsy Soul Boutique!"
"You are welcome," I said. Bless his little heart.

It's been gray and chilly again today and I have mostly stayed in to work on Maggie's quilt. I made good progress. 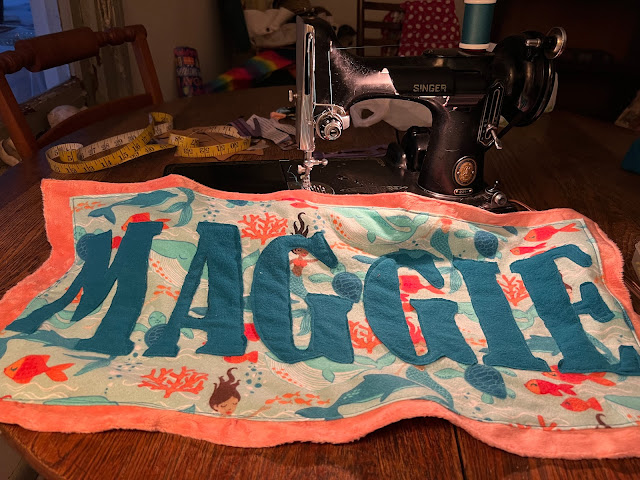 That will be the name part of the name blanket. I got the letters cut out and sewn onto the top panel and then all of that sewn to the orange panel which will be like a frame. I am going to embroider around the letters and I believe I may hold off sewing that part to the rest of the blanket until I do that. Just easier to work on a smaller part than on an entire blanket although it IS cozy, having one of those on my lap as I stitch.
Anyway, this is what the blanket will look like, for the most part, when it's done. 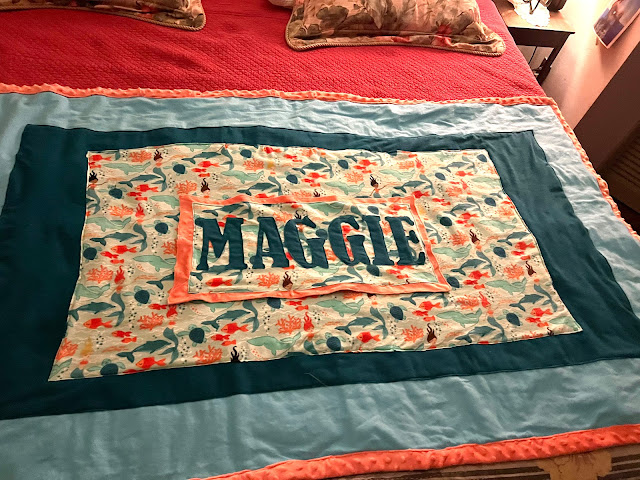 And as I always say- at least it is soft. And will be cozy.
Hank is doing much better today. His heart fell back into its regular rhythm while he was sleeping last night so HURRAY!
And of course the huge, big news today is that Mr. Moon will be back home soon where I can love on him and feed him and tend him. He called earlier this afternoon to tell me that he was in Orlando but of course he still had to fly to Atlanta and THEN back to Tallahassee because this is the way it is. So frustrating. He literally could have driven from Orlando and been home earlier than he will be waiting on the flight to Atlanta and then home. I remember the last time we flew home from Cozumel and I was weeping by the time we'd spent fourteen hours or so in planes and airports. Tallahassee, the capital city of Florida has the most ridiculous air-connections in the world. You cannot go anywhere from here without going through Atlanta and that is just the way it is. I have clean sheets on the bed and will leave the light on and the door unlocked for him and I expect him around one or two this morning. I'll get his blanket arrangements set up on the bed before I go to sleep and I've told Maurice that Daddy will indeed be home tonight and that she will probably see him before I do. She just looks so worried all the time these days. 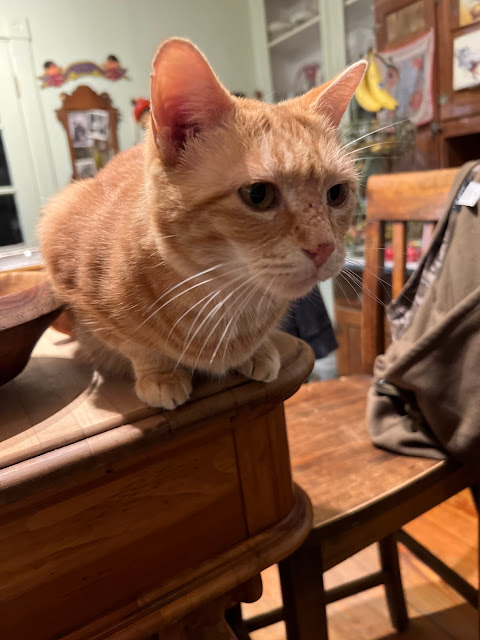 For my last meal as a hunting widow, I am making a cream of asparagus, leek, and potato soup. Mr. Moon will eat asparagus but it is not his favorite and somehow, I bought more than I could use up while he was gone. So. It will be perfect for this cold, rainy night because yes, it is indeed raining now.
Here's a picture of Maggie and Gibson that Lily sent to us today. 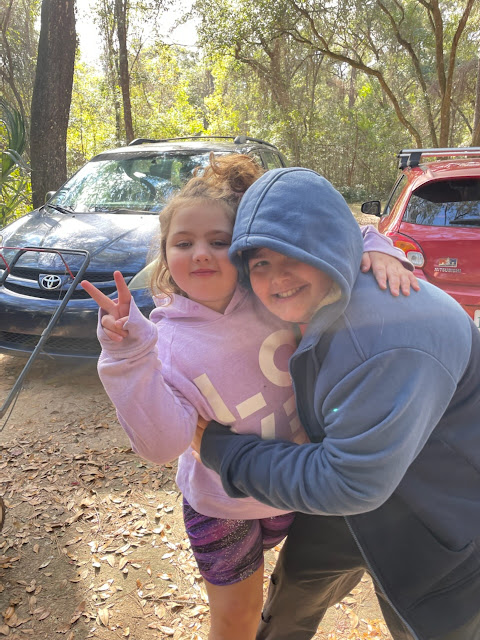 And their grandfather will be home soon. I can't wait.
Love...Ms. Moon
Posted by Ms. Moon at 6:44 PM