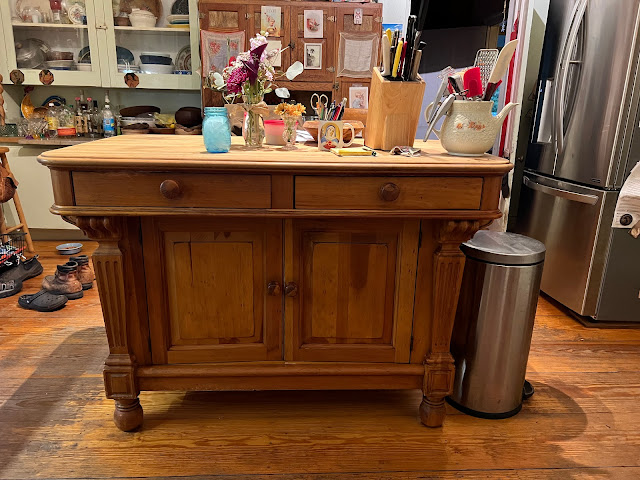 Cleaning that very utilitarian piece of furniture was about the sum total of my efforts today. Y'all- I have got to pick up the pace here.

I didn't even clean it that well! I just wiped it down with Murphey's Oil Soap and water and scrubbed at the most intensely filthy places like the corners and edges and nooks in the carvings. It's an interesting piece of furniture, isn't it? Got several design features going on there. I didn't buy it. It came with the house. But it makes a good work surface when it isn't clogged with stuff that gets plopped there because where else are you gonna put it, and the cabinet part is where I keep all of my napkins, dish towels, dish rags, place mats, aprons, etc.
I have a lot of all of those things. I do love practical fabric objects.

I had sworn to myself that I would at least go do some weeding in the garden but that never happened. Then I determined that I would try to do a deep cleaning and rearranging of the kitchen counters but that didn't happen either. I did clean out (sort of) under a few of the cabinets where the flooring doesn't actually meet the cabinet. There is always the nastiest dust and dirt in there along with stray Friskies, lost supplements, and, okay- I admit it- dead bugs. Not very many. I didn't even find any today. But hey- we live in Florida. This house has many, many places where bugs and mice can crawl in at their pleasure and sometimes do. The other day when I got up I found one of the throw rugs in the hallway crumpled up and asked the cats, "What happened here?" They pretended they can't speak English and ignored me but I figured it out when I found a dead roach right by the rug. There had been a roach-killing situation and they love the way the roaches skitter on their backs across the floor when batted at.

A friend who is in Africa with his wife and some of his family and some friends sent me a travel report this morning and I spent a little time reading that. Between all of the birds and animals they've seen, including a pangolin which was the first siting in that area in three years, and descriptions of the cool places they are staying AND an emergency plane trip to a hospital for medical care (everyone is okay), it was all far more exciting than roach rodeos, I can tell you that right now.

I also got an email with the results of my mammogram and my bosoms are fine. I was not worried, as I said yesterday but it's good to know.

It's been cloudy here all day, warm, and muggy but I am not complaining. It's going to get up to 80 tomorrow but the low on Saturday night is supposed to be in the upper thirties so, as usual, we will be confused and disoriented and have no idea what to put on when we get up.

The little family made it to Legoland and I do believe they are having the time of their lives. 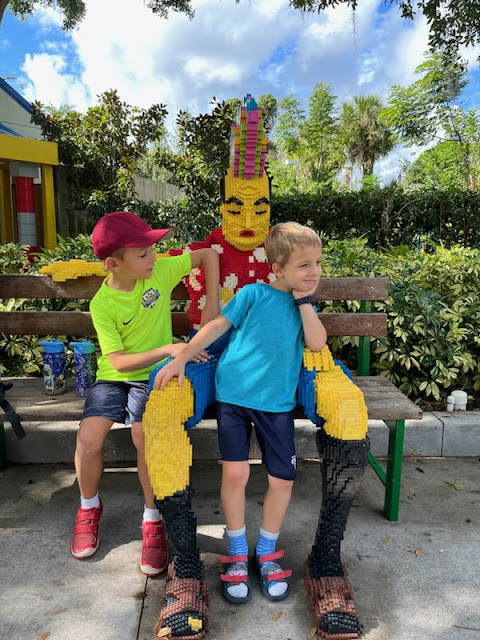 Florida Legoland is on the site of what used to be one of Florida's biggest tourist attractions, Cypress Gardens. A man named Dick Pope opened the place in 1936 and at that time it was basically some beautiful gardens planted with exotic trees and flowers and bushes that he and his wife had collected from all over the world. 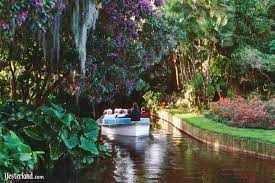 Dick was an entrepreneur if there ever was one and started including boat rides through the canals and onto the lake that the gardens were built on and then he got truly creative and started having regular water-skiing shows there. Water skiing was a relatively unknown sport but Cypress Gardens took care of that. 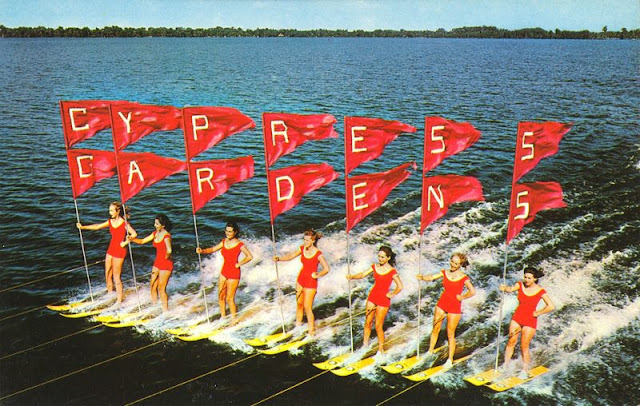 There were death-defying water ski jumps and gravity-defying water skier pyramids. There were barefoot skiers! It was all amazing. And when the aqua maids weren't water skiing, Pope had them dress up in Southern Belle costumes and sit at ordained spots throughout the gardens. 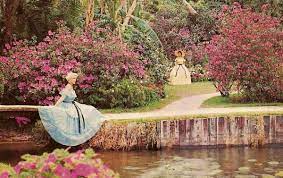 I know all of this first-hand, because I lived in Winter Haven from the year I was in 6th grade through high school. Even before that, I'd been on a field trip there from Sebastian Elementary when I was probably in about the fourth or fifth grade. It was glorious! I bought orange blossom perfume in the gift shop!
All was well and good for C. Gardens, as we called it, until the Mouse came to Florida and ate it all up. Almost all of the smaller attractions closed and eventually, in 2009, Cypress Gardens did too. Several other theme parks tried to bring it back but it never really happened until Legoland bought the property and I think it's doing okay again.
I am thrilled to find out that they are paying homage to Dick Pope's dream. They are doing a water ski show and they have made lovely Lego southern belles. 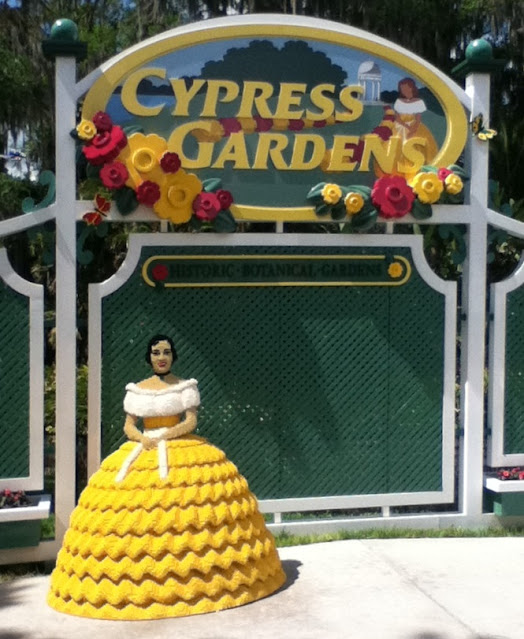 Okay, yes. That's a little creepy but whatever.

August and Levon of course don't care a thing about the history of the place. They are simply enchanted with it all. Here's their bedroom. 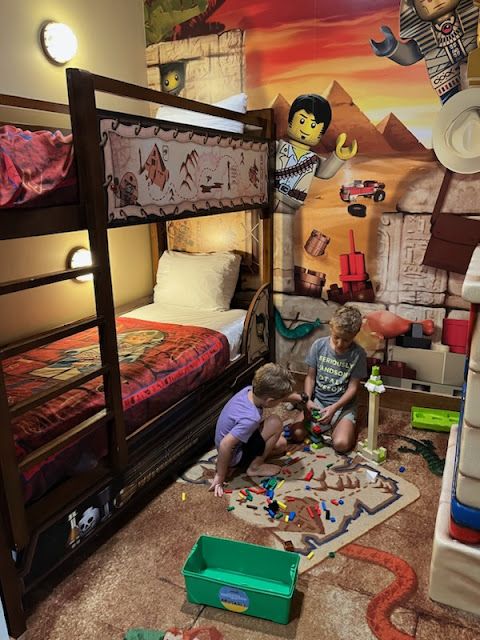 Could life get any better?
I think not.

I wonder what Dick Pope would think about all of this.
Who knows?
Not me.

I just know that it's Friday, despite feeling to me like a Saturday, so I am having a martini and thinking of my husband who is up in the frozen north while I'm sitting here on our back porch, barefoot, happy, and definitely NOT pregnant.

I did sit down at the piano this afternoon and messed around for about an hour. I found a few pieces in the 3rd grade instruction book that I have some muscle memory for and once again, when I hit the right notes, my soul is happy.

Tomorrow I SWEAR I will get outside and do some work in the garden and maybe in the yard. And I really would like to clean and reorganize the kitchen a little bit. Parts of it are just ridiculous when it comes to organization. I have a few books that I want to take to the little take-one, give-one library down the street, even though the woman who put it up yelled at me that time for being on property she doesn't even own.

The drummer at the church next door is pounding out the beat for the Lord, I can hear the crickets singing their own percussive measures to whatever it is they sing to, and I am content with my world.

Here's a trailer for a movie that was filmed at Cypress Gardens in 1953, starring Esther Williams and Van Johnson.