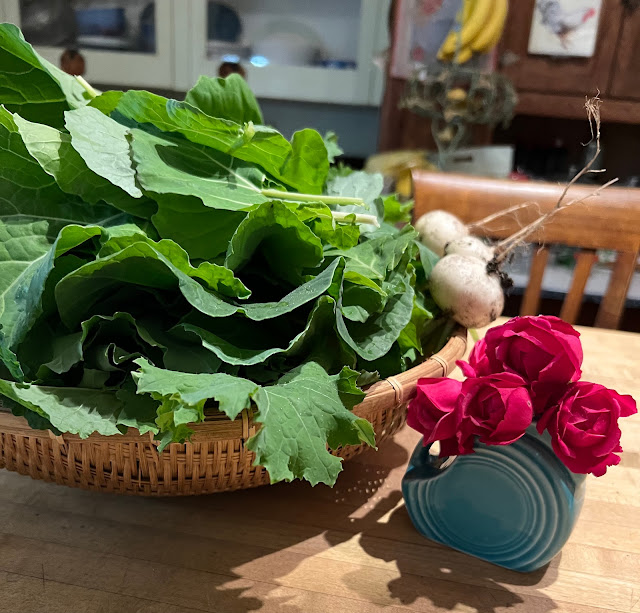 Fresh cut greens and roses from the garden. See my turnips?

This may have been one of the lowest stress Thanksgivings we've ever had. Perhaps because I did so much beforehand. I do not know. But no tizzies were had, no children screamed and shrieked, no glassware was dropped, no gravy was spilled.
It was almost odd.

One of my favorite things that happened today was when Tom said, "The thing I like about Thanksgiving at your house is that no one argues about politics. There's not a Republican among you."

"I've done my job!" I said, slapping the table.

And it's true. We may represent almost every sort of gender/sexual identity in the rainbow and we range from six foot ten to five foot three (not counting the grandchildren) and we earn our bread in many different ways and we have our problems, sure we do- and they vary from one of us to the other. We are far from perfect. Each of my children had a different childhood because every child in every family is born into different circumstances if we're honest, but when it comes to politics and religion, there just isn't much to discuss. Not to say that we don't discuss these things but I don't think we've ever had an argument about them. In fact, we just don't argue much among ourselves. About anything. We are too busy laughing and telling stories and being silly and today we were too busy cooking and serving and eating and playing with puppies. Who has time for arguments?
Jessie had asked if it was okay to bring the pups over for cuddles and play and I said, "Oh yes. Bring those puppies!" And she did. They stayed in Mr. Moon's bathroom sleeping in their kennel a lot of the time but they came out to pee and poop and get snuggles. They were so fun that we have decided that puppies should always be part of Thanksgiving.

So here's some pictures. 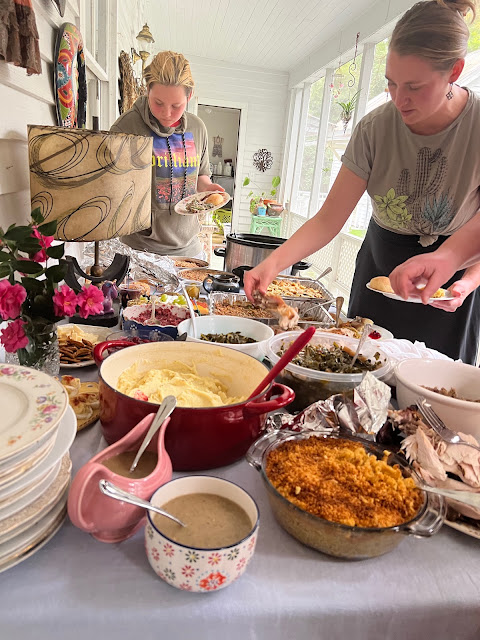 Food on the back porch. 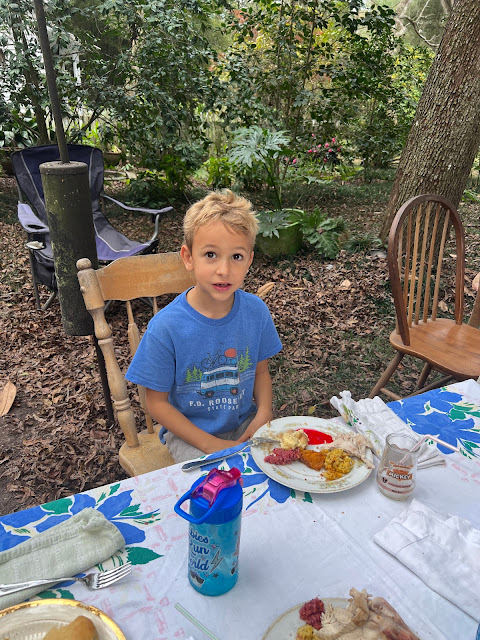 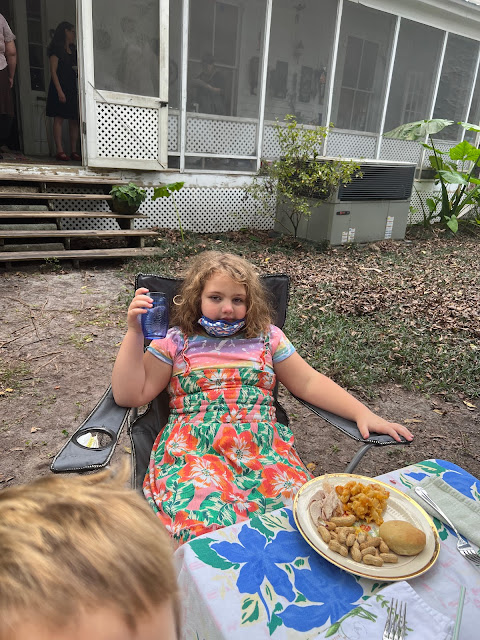 Ms. Magnolia who wanted roasted peanuts as her main course.

Gibson and Levon studying a biscuit. I do not know why. 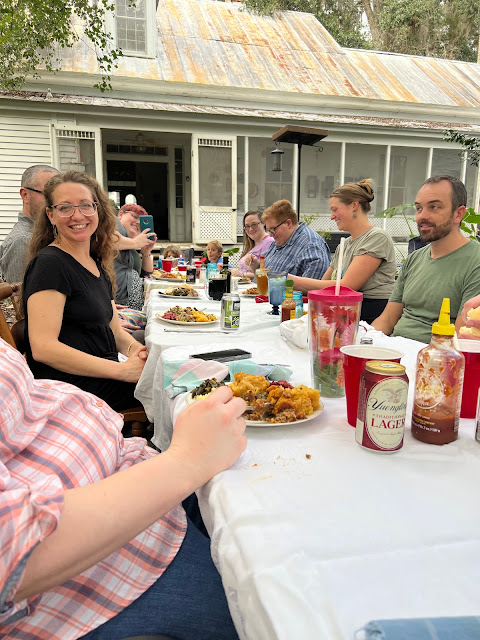 Rachel, Michael, May, part of Lauren to the left and a friend, K, who was a delight and joy to have here, Hank, Jessie, and Vergil on the right. 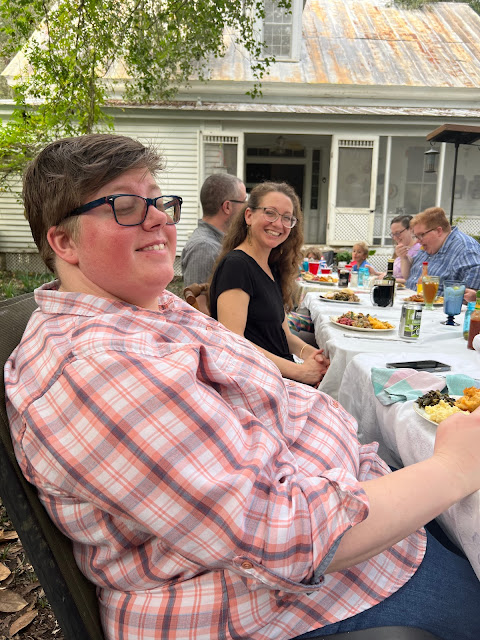 More of Lauren and can I say that the more Lauren, the better? I love this woman. 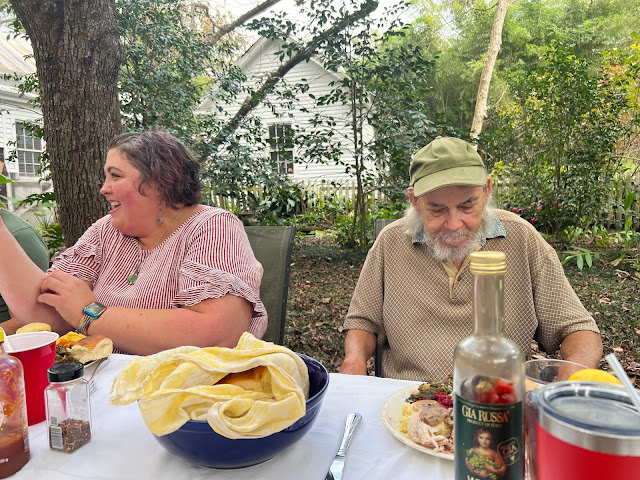 Lily and Tom who has been a guest at Thanksgiving at my table since long before Lily was even a sweet, wicked gleam in her daddy's eye. 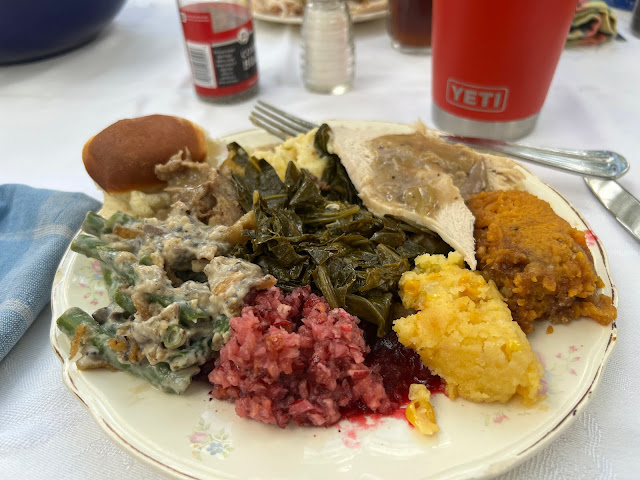 My own personal plate of food. And no, I could not finish it all. 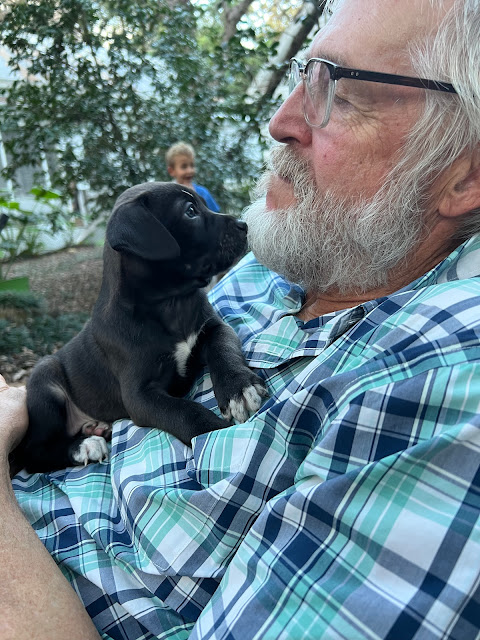 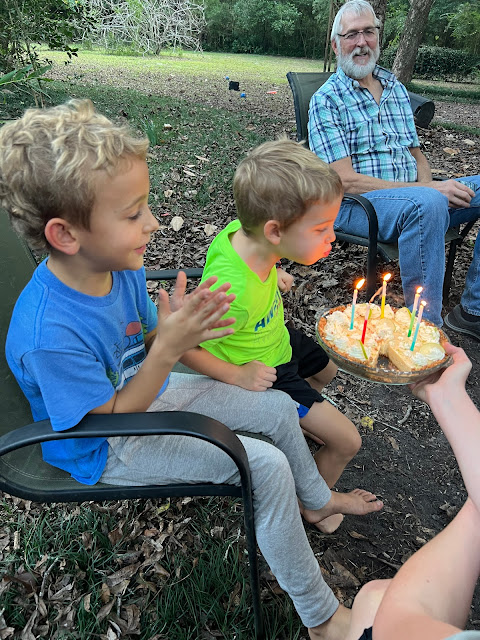 Levon blowing out his candles after we all sang Happy Birthday to him. He was in Orlando for this birthday so we made up for it tonight. 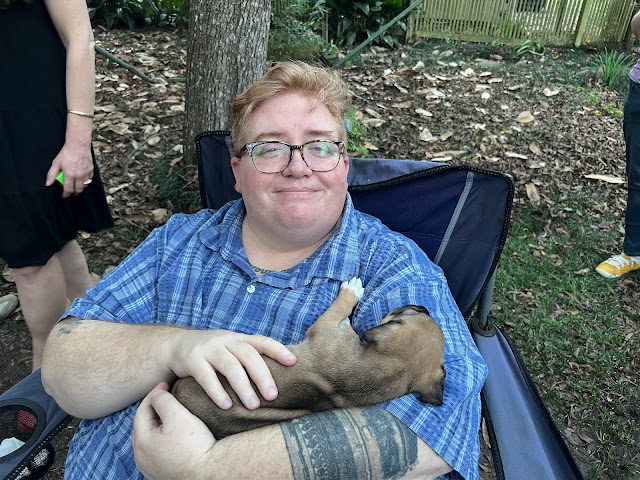 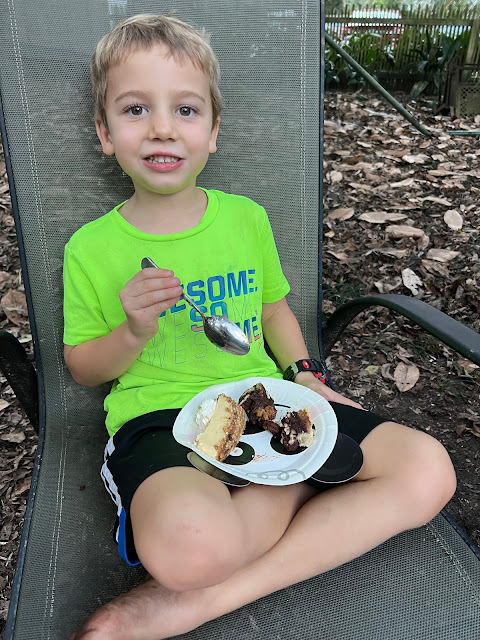 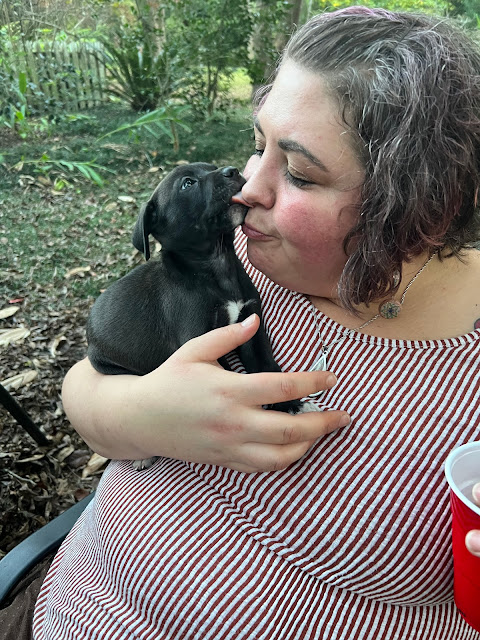 Lily getting baby love from Ollie. 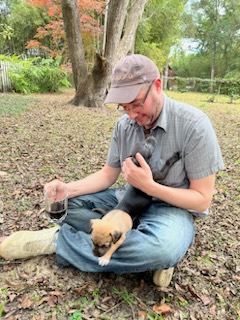 Michael loving on the babies. 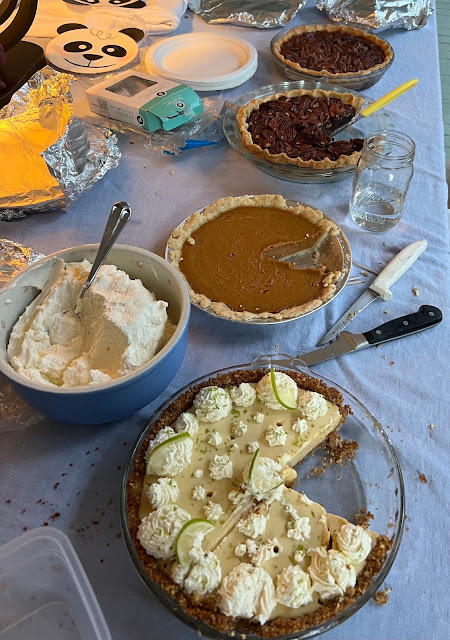 The pie selection. Jessie's key lime, Rachel's pumpkin, MerMer's chocolate and regular pecan.
Ample whipped cream.
Hank's play list was amazing. I have no experience making a Spotify playlist but here's a link for anyone who does. Just for fun you can read down the list to see some of the music that our family loves. It ranges widely and represents what all of us love. Lon and Lis are represented, of course, and other musicians we know. I didn't really pay constant attention to the music but over the course of the afternoon I was delighted over and over again to hear a song that means a lot to me. We would all join in singing at various times, maybe doing a little dance step or two. I loved it.

Around noon, I poured out two shots of rum and Mr. Moon and I both downed one and I said, "Whoop-ay-a!" and I cried. Not just for Lynn but for all the beloveds who have graced us on Thanksgivings who are not here anymore. And I will proudly admit that when all the kids got here, I got out all the shot glasses in the kitchen and set out the rum and we poured ourselves what we wanted to wet our throats, to raise a glass, to make a toast, to send love together to the universe, to our beloveds, to all the spirits.
It was a good Thanksgiving. Everyone helped clean up. Leftover containers were filled. Puppies were carried out to the car. I have already simmered the turkey carcasses to make soup with and the kitchen still smells like Thanksgiving. 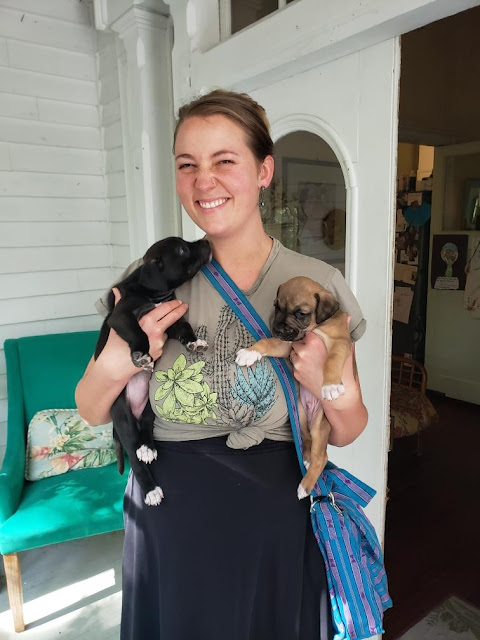 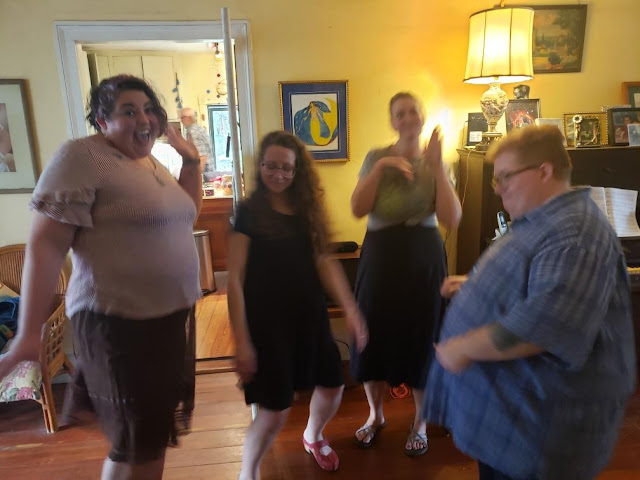 Wait! How did I miss hallway dancing? 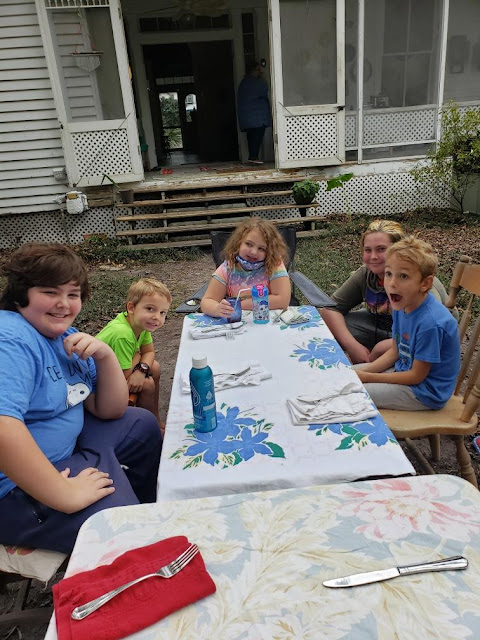 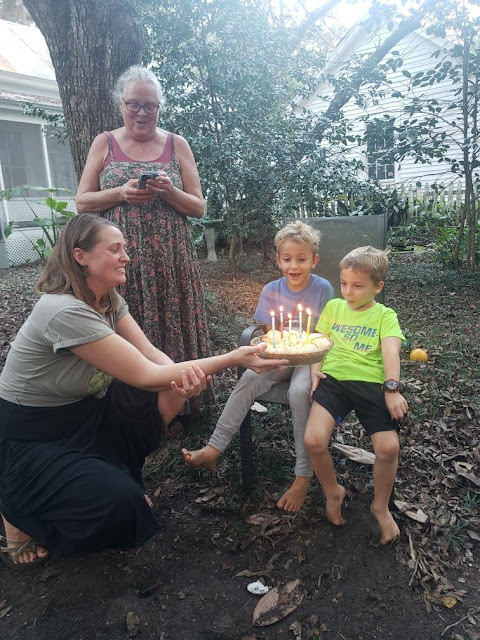 And here's a rare picture with me in it. I swear I was not just looking at Instagram on my phone- I was searching feverishly for my camera app so that I could take pictures of Levon blowing out his candles. Which I did.

I guess that's about it. I'm hoping to be hungry enough before bedtime to eat a piece of pie.
I am so grateful for all that I have. Plenty and more of food and a beautiful place to have these family gatherings.
But mostly, the family that gathers here, of course.