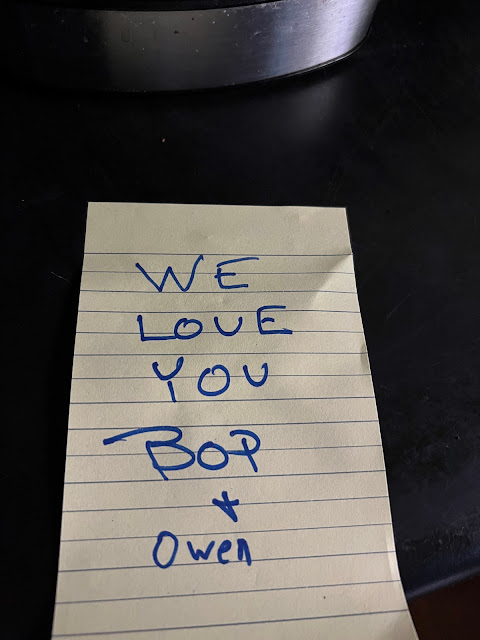 I found this note by the coffeepot when I got up which was long after the fishermen had left for the coast. Such sweetness.

It was so nice to have Owen here. At one point when I was making our flautas, Mr. Moon came into the kitchen for something from the Glen Den where the guys had been watching the FSU/UF game and he said to me, "We have a fine grandson."
And we do.
Because Owen was the first grandchild and the one I took care of the most, I think there is a very strong connection there between us. He grew up partly in our house, really, and every room and nook and cranny in this old house is attached to a memory of Baby Owen and then Toddler Owen, and then Gibson joined us and, well, they are my boys. I told Owen last night about the first time his mama brought him over for me to take care of. She had to go back to work and I was so nervous that I literally sort of dissociated and for a few minutes couldn't remember the names of my chickens before he got here. You would have thought I'd never taken care of a baby in my life. I just found the blog post I wrote the morning he was about to come over. It is HERE.
So I told Owen that story and we laughed. Obviously I did manage to keep the boy alive and now he is a strapping (what does that mean?) thirteen-year old and in some ways we are bonded forever. 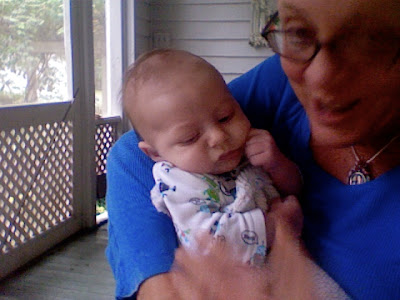 Many of you know that he gave me my grandmother name which is MerMer and is perfect. I had no idea what I wanted my grandchildren to call me. Nana? Memaw? Grandmary? So I just referred to myself as Grandmother and Owen began to call me MerMer when he started attaching names to things and that was perfect because it's what my little brother called me when he was that age, being unable to say Mary, and besides that, my email name since the beginning of the internet has been MerLuna so it was meant to be. Obviously.

So there is all of that in me when our biggest boy comes to visit and there is a joy attached to his presence and a peace, too, as he grows older and we become more and more aware of how fine a grandson he is.
The fact that he now wants to and can go fishing with his grandfather makes Mr. Moon happier than anything I can imagine. He has dreamed of this since Owen was born and now it has come true. 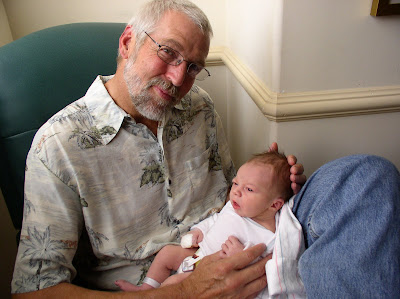 This photo was my header for a long time and I know some of you will remember it.
I've heard from Glen and they had a good day out on the water. Owen caught grouper and other fish and I know he helped with all of the many things that have to be done when it comes to fishing offshore. I imagine that Mr. Moon is so very proud of him. We both are. They are on their way home.
I have not felt very good today, in fact I'm thinking I may be coming down with something. I've been so very tired and cold in my bones and my eyes feel strange. I laid down and took a long nap under my duck and woke up to find it dark which is so disconcerting. But it's been a gray day and so staying in hasn't been bad at all. I made a turkey soup early on so that we'll have something to eat with all of the good stuff in it. Greens and carrots, tomatoes, celery, onions, garlic, corn, turkey and vegetable broth, rice. And oh yes- turkey. That soup could sustain life forever, I think. I'll squeeze lime juice in it before we eat it. 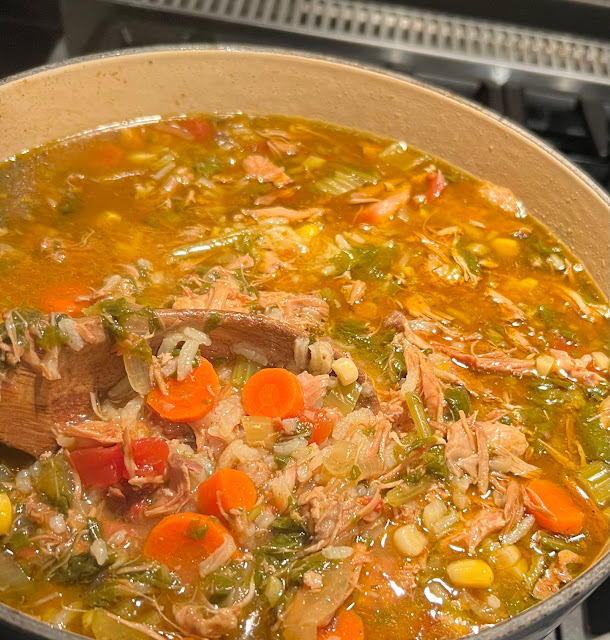 And that is how it has been in Lloyd today. I don't believe I have taken one step outside. I am still trying to get used to having no chickens. My body and mind alert me at certain times that I should go let chickens out and feed them or go tuck them into their hen house. I have those thoughts and then immediately think, "No. No need." And I am sad.
Things change. To everything there is indeed a season. The Bible got that right.
Love...Ms. Moon
Posted by Ms. Moon at 7:19 PM