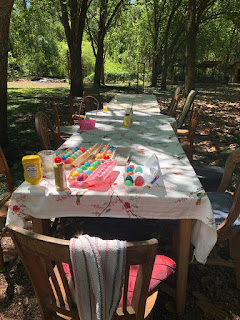 Oh my goodness. I think there were twenty of us for lunch today. Here's what it looked like after the egg hunt but before the food came out. Well, except for a few condiments. But what a beautiful day! It was truly fabulous. Blue, blue skies, fresh green leaves, no bugs, and a temperature so perfect that none of us could quit talking about it.
Lots of perfection going on here lately. 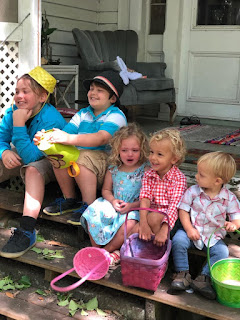 As you can see all of the little rock stars were having fun except Maggie who was having a little rock star melt-down. The egg hunt was about to begin.
She got over whatever it was that was upsetting her and many eggs were found. She recovered nicely. 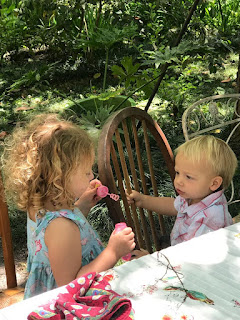 Mark took this picture.
It was so good to have Mark here this year. I can't remember when Mark started coming over for Easter but now it's my favorite part of any holiday season. Even better than dying eggs. He's one of mine and he calls me Mom and that is one of the joys of my life. 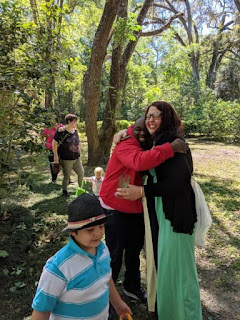 Rachel took that one. And here's another one that Mark took: 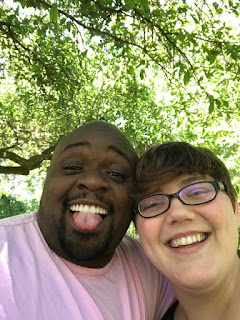 Mark and Rachel. We are so rich in beloveds around here.

And guess who else came? 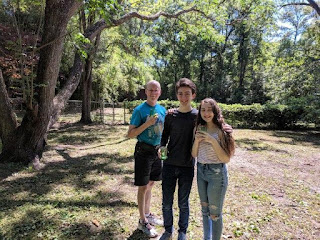 Chuck-My-Brother and Kian and Riley! Riley is so grown up. She, like her brother, has a lot of good memories of being here when she was just a young thing. I told her to make herself at home and to go snoop around if she wanted to, which she did. She told me that it's just the same. She is absolutely delightful and I have invited her and her brother to come back anytime they want. I think they'll take me up on it, too. And get this- Kian's favorite teacher lives catty-cornered across the street from me and lived in this house when he was a boy. 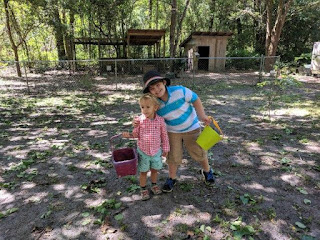 Gibson and August. Photo by Rachel. 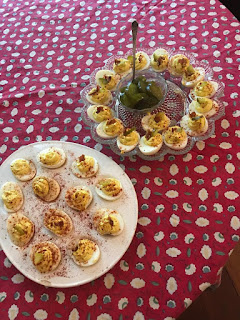 Jessie's deviled eggs. Mark took this one and the next one too. 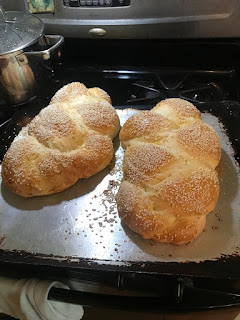 The Challah. I swear, that is the most incredible, fool-proof recipe for bread ever. I did get up early enough to make it.
Of course.

And guess who got home just in time for lunch? 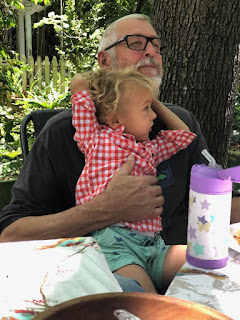 As happy as I was to see him, I think Little Boppy may have been even happier. 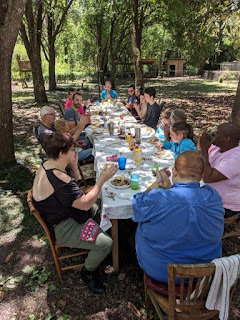 There we are, or at least most of us.
Everyone pitched in and helped with the tables and chairs. Rachel and Hank had a potluck yesterday and brought over the bountiful leftovers from that. Cole slaw and potato salad and black bean and corn salsa and a bunch of other stuff. Pasta salad with roasted squash that Rachel made. Cupcakes, cookies, and a ten-layer red velvet cake.
Lily brought the famous pineapple cheese casserole and a salad with every good healthy thing in the world in it including quinoa and walnuts. Jessie brought the deviled eggs and also fixin's for some sort of delicious looking drink which involved Prosecco and orange juice and vodka.
The angel biscuits were...angelic. They rose right up to heaven and floated off the baking sheets directly onto our plates. I can't believe I didn't get a picture of them.
The copper pennies got sort of a mixed review. They were interesting and Vergil said that they should go into the regular rotation of holiday foods but I think mostly we found them so-so. But my gosh, they sure were pretty. The greens were decent.
And Lord, I have so much cheese left.
And hard-boiled eggs.

And the ham? Well, I'm going to tell you the truth- I do not think that spiral cut hams are nearly as good as non-spiral cut hams. They just get more dried out no matter how carefully you wrap them in aluminum foil when you heat them up. Next year, I'm going to get a regular old-fashioned ham. When you only get ham once a year, you want it to be good. And honestly- how hard is it to slice a ham?

So that's it. I don't really think I could imagine a better Easter except for the fact that May and Michael could not come due to being sick with some sort of horrible-sounding cold or flu. May called me yesterday from Publix where she was getting what they needed for a siege of sickness and I could tell from her voice that she did not feel good.
Not at all.
In fact, she cried a little because she was going to miss the gathering and because she was in Publix which was packed with people and she felt like hell and all she wanted was to be home and in bed.
We all know that feeling. And we missed them like crazy.

Easter is funny for me. Not funny ha-ha, but funny interesting. Despite its incredibly Christian connotations in our culture, it is so easy to just disregard the horror of the image of a man dying on a cross and then being stashed in a tomb and becoming alive again which is, as far as I'm concerned, the Zombie origin story, and just go straight to the celebration of the full rebirth of living things after winter. I don't need some weird myth about a god sending his only begotten son to live as a man among humans and then being tortured and killed, all in order for us to enjoy something called "eternal life" to appreciate the joy of new green leaves and flowers, a bounty of eggs, and the bright, lovely faces of children as they hunt for those eggs, dyed in jewel colors.
These are things I can whole-heartedly celebrate.
And today we did.

Ham sandwiches for supper anyone?
Or perhaps egg salad.

Whatever. It doesn't matter. We're alive, we're here, and if there is anything on earth more worth celebrating than the miracle of birth and rebirth, I don't know what it is.