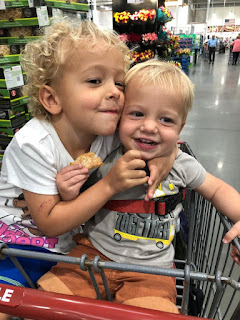 Today was the day to go to Costco and buy the ham for the Jesus-Is-Risen-Like-A-Loaf-Of-Challah Celebration. Jessie needed to go too and so we met there. August ran to me when he saw me, his little legs churning like a sprinter's. "Mer!" he shouted and I was so glad to see him.
His brother, who had just woken up, looked at me like, "Oh god. Really? Her again?"
He cheered up though quite a bit before too long. As you can see in that picture.
Costco is a crazy place. Where else can you buy containers of food that look fairly normal-sized until you get them home where you realize you've bought literally pounds of food when all you need is ounces?
I say this as a woman who has enough of a cheese assortment package and crackers to make canapes for everyone attending a reception after one of those mass weddings that the Reverend Sun Myung Moon used to perform. (No relation to the Lloyd branch of Moons. Let me make that clear.) 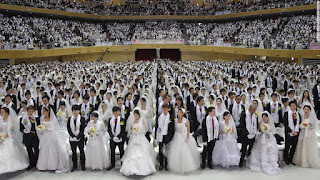 Sometimes I'll look at what's left of my formerly giant block of cave-aged cheddar from Costco and think, "Whoa! I better get some more! We're almost out!" only to realize that in all actuality, I still have more than you'd get in a regular cheese purchase at a regular grocery store and then I calm down and wait a few more months. In this case with the cheese assortment package, there are five different wedges of various cheeses, all of which look delicious, and each of which would have been enough on their own for the appetizer portion of our meal.
Let's face it though- these feast-based holidays are nothing more than excuses to buy and consume foods we've been wanting to buy and consume all year but had the good sense not to.

But you never know how many people are going to show up for one of these ham-related shindigs. Or any food-related shindigs. Just our family alone is a slightly daunting number. And of course we define the word "family" loosely. But fiercely and sincerely.

Besides the ham and the cheese I got ONE package of a sliced smoked salmon sampler. I asked Jessie if I should get two. "If you want leftovers," she said.
How did I raise such a sensible child?

I'll cook the greens on Saturday, let them sit overnight and then warm them up on Sunday. They'll be better after a day's merging of the flavors as most things are.

So. Okay. Speaking of food. This morning as I was perusing the Tallahassee Democrat, I came upon this article for a dish called "copper pennies." it claims that this is "the best carrot side-dish ever."
What the fuck? I said to myself. As I so often do.
I had never in my life tasted or even heard of such a thing. So then I started googling and damn if there aren't about a thousand recipes for copper pennies online, most of them claiming that these are the best things ever. EVER! And that their mama's recipe was the best one. Or their granny's recipe.
Have YOU ever heard of them?
Tried them?
Made them?
I am so intrigued because they just sound so weird. But not as weird as meatballs cooked with Heinz chili sauce and Welch's grape jelly which are about the best things in the world to eat.
Another reason I'm intrigued is that the carrots in my garden need to be pulled. Most of them have split from getting too big. So I just might make up a batch and see what all the fuss is about.
I'll let you know if I do.

Wait. How did I get here from Costco?
No idea.
But after Costco Jessie and I met Lily and Lauren at the Indian buffet for lunch. And as always, it was delicious. But today was different because we were celebrating Jason even though he was not there.
This man, this daddy, this husband 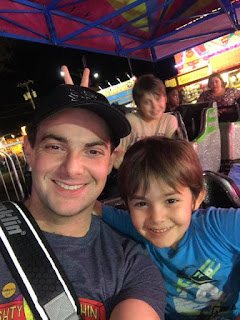 got the official notification today that he has been promoted to the position of meat manager at Publix.
This is a huge deal.
Not only did he get the promotion but the store he's going to be working in is one of Tallahassee's largest Publix's and the store that managers wait for years to be transferred to. He's worked there before so everyone knows him and the store manager likes him and he's got the rhythm of it already. It's fondly called the Club Pub because it's near the campus of FSU and the students shop there. It's an extremely high volume store and he's going to be working his ass off.
But that's okay because he's been working his ass off for years and he so deserves this and we are so proud of him.
This is going to mean so much for his family and family is what Jason is all about. Lily did good when she picked him to be her husband and the daddy of her children. I can't say enough about how proud I am of him.
So we were all happy to hear this good news and we ate our Indian food and yes, the kids were a bit unruly but you know- kids. 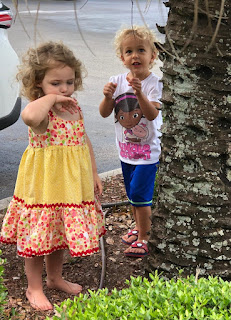 One second they're being tiny dictators, insisting on getting their way, and the next minute they're saying, "I love you, Mer," and cuddling up and offering you bites off their plates.
They are entirely unique and sentient beings who have only been on the planet for a year or three but who came equipped with every human emotion available and every human desire intact and every human ability to think and reason well in place. They may not have the experience or maturity or self-control to harness all of this exquisite humanity but that too is part of their charm.
Oh god. I love them. And oh god. I am so glad that I am a grandmother now and not a mother because I just do not have the energy required to be the firm voice of reason and authority.
And guess what?
That's why grandparents spoil their grandchildren- because they know it's easier, FAR EASIER to just give in than it is to upset the little people and we are worn out from upsetting our children, the parents of these grandchildren in an effort to raise them properly.
And yet, the sweetness is undeniable. I have a little wound on my thumb knuckle from grating hard Parmesan cheese on a very sharp grater and August wanted to kiss it at least three times today.

Well, that's about it for today's ruminations and ponderings.

We're supposed to get some fairly serious storms with possible high winds and perhaps even tornadoes in the morning which is hard to believe right now. There is not one breath of a breeze. Not one leaf is moving. And then it's going to get cooler again and I am not sure that I've ever been able to keep my duck out of its summer storage this far into spring. But the celebration of eggs and rebirth should have perfect weather and we'll be able to eat outside, pondering the magical alchemy of egg yolks mashed with mustard and mayonnaise and salt and pepper, the deep funk of salty, vinegary greens from the garden and the sweet community of what we call family as children race around the yard, high on chocolate Easter bunnies, jelly beans, and the certain sure knowledge they are loved, no matter what.