Saved By The Rolling Stones, Once Again 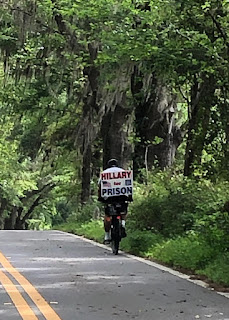 Can you read what the sign on that guy's bike says?
Dear Lord.
I see a lot of bike riders as I walk on White House Road but I've never seen this one before. And he did not appear to be someone who has spent a lot of time on a bicycle. He was having a difficult time making it up the hill.
Not that I'm judging him for that. Those hills can make me wish I could call a cab sometimes.
No, I'm judging him for the sign which he had somehow precariously attached to the back of his bike. I absolutely had to take that picture.
When we recrossed paths later on in my walk he actually said to me, in the most friendly, pleasant tone imaginable, "Isn't this a beautiful road?"
I agreed that it was and kept on walking.

So it was a day. For some reason I was in a bit of a foul mood. Things were just making me angry. I got out in the garden and pulled a few weeds and planted a row of black-eyed peas and was working on getting a plot ready for my corn when I almost lost it. It was hot, I was sweating, ants were everywhere, and every time I inadvertently leaned on that sensitive part of my knee I could not help but cry out. It's just a terrible sharp burning pain and I know that sounds like a nerve thing, but it doesn't feel like that.
I don't know.
I do not know.
But I know that when my phone rang and it was my husband I actually cried.
"I just can't do what I used to do anymore," I wept. "And it sucks and I hate it."
He was going through some frustrations of his own and we ended up comforting each other and then laughing by the time our conversation had come to an end.
I gave it up on the garden and switched to stem-pulling on the mulberries. I sat down in the living room with my various bowls and turned on Netflix and what did I find?
A documentary I've been wanting to see for two years.

And I sat and cut tiny stems between my thumb and forefinger until my hands looked as if I had committed murder and cried like a baby, watching those beautiful old men, gypsy rockers every one of them, living and playing with such obvious joy.
It's so hard to explain how I feel about this band. Actually, it's impossible unless you grew up when I grew up and music became something that was far more important than perhaps it had ever been for such a huge number of people in such an almost universal way.
Music was what pulled our world tribe together.
This may sound extremely naive and hippie-ish and even ridiculous but you know what?
Fuck that.
It's true.
And although there were SO many musicians and bands that represented so many different genres and cultures there were a few that changed everything.
The Beatles. Always number one.
Bob Dylan. No one like him.
Jimi Hendrix. He blew us into planetary exploration.
Janis Joplin. She showed us what a strong and determined woman can look like and sound like even as she pulled her heart out of throat and gave it to us.
And more, of course. So many more.
But those- well, they were at the top of it all and the Rolling Stones were the black hats to the Beatles' white hats, as even Keith said. You have to have one if you have the other and as in the yin-yang symbol, neither side is bigger than the other. Neither is more important than the other.
The old joke goes:
"Who's the greatest band of all times?"
"The Beatles."
Who's the greatest rock and roll band of all times?"
"The Rolling Stones."
And two of the Beatles are dead, one of them John Lennon whose death many of us old folks will never quite recover from and Jimi's dead and Janis is dead and Bob Dylan ain't dead and he's still playing but I'm pretty sure that it's because he wouldn't have a clue as to what to do with his life if he didn't.
But.
The Rolling Stones. They're still doing it! They're still kicking the shit out of rock and roll and they have survived addictions and cancers and now Mick's heart problem and problems with the law and marriages and divorces and deaths of loved ones and even one of Keith's children, a baby who died of crib death. They've survived inter-band fights and disagreements and business shit and artistic shit and personal shit on every level. They have survived and they pick up their instruments and they didn't get plastic surgery and yeah, okay, Mick and Ronnie obviously dye their hair but that's their business. Their faces look like the Grand Canyon with the deep crevices that go way past what we might call wrinkles and they're still skinny, blitz babies all.
Which is another thing they all survived.
And I can't help but love them for all of that and this isn't even mentioning the music they've given us that's made us dance and sing and feel evil in the very best of ways and they are still here, looking no more like pretty boys than they ever did, but only like themselves, wearing the faces that they have created out of their lives, their spirits in bodies that may be old and even gnarled but more beautiful for all of that and when they're onstage and Keith plays the first few chords of "Satisfaction" I am twelve years old again and listening to a radio whose cabinet is made of wood, its dial made of Bakelite, and feeling like maybe, even though my stepfather visits me nightly and makes me feel as if I have absolutely no control over my own body, there is this message in this music that tells me that if I just hold on, I can somehow tap into this power that they are so obviously filled with and I will be able to claim it for my own.
Does that make sense?
Probably not.
But it does to me.
And now that I'm old, too, with this wrinkly skin and this body that I don't even recognize as my own sometimes, you can't imagine what it means to me to see these same men who seemingly transcend all of those age things to be what they have always been which is...The Rolling Stones.
They still have that power and maybe, just maybe, I can still claim my own.
And it would appear, from the concert footage in this documentary, that it's not just us old people who appreciate what they're doing. The thousands and thousands of people who attend their concerts appear to find as much joy in the music, no matter what their age, as audiences ever have.

Well, as I so often say, That is enough of THAT!

The mulberry pie is in the oven and is just about ready to come out. 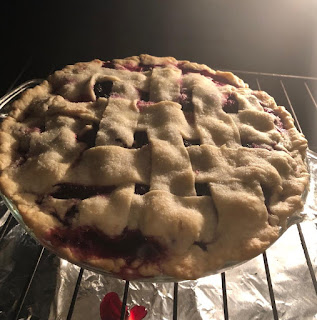 And no, I can't do pastry. That's ridiculous. But I'm pretty sure that I've never in my life spent as much time working on a pie in my life if you include all the days of picking berries I've done and all the thinking about it that's gone into the making of it. Plus, my fingers and fingernails may be permanently dyed purple black and I have two cuts on my forefinger from stemming the berries.
I may not even cut it until Mr. Moon gets home.
Or I may. 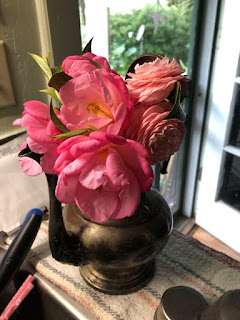 I swear- these are the last of the camellias.
I'm going to miss them so much, their sweet baby-pink faces gracing my yard, my house, my soul.