If You Eat A Butterfly, Do You Feel Like You Have Butterflies In Your Stomach? 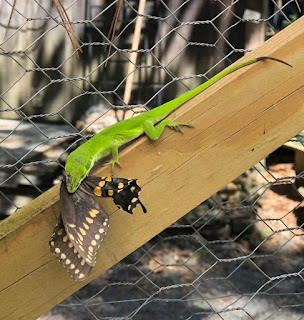 Another one of those tilt-a-whirl days with every emotion bringing up a new wave of eye water that threatens to spill and more than enough emotions to go around.
Why, god? Why?
Am I fourteen again?
No. At least when I was fourteen I had beautiful skin.
And hair.

I have three hens missing now. Three. Still no sign of Dearie and both Big Mama and Connie were not in the coop this morning and I haven't seen hide nor feather of them today.
I am about to give up on the chicken tending. I really am.
Darla's still on the nest, her feathers puffed and full and when she does get off to eat she sings the chick-calling song.
Oh Little Mama. That makes me cry too.
It's getting hot and I can't help but think that those eggs under her (a few of hers and a few of the other hen's) are just going to cook instead of whatever-you-call it that they're supposed to do.
Also? The Confederate jasmine has turned from a sensual delight to an assault on my senses. This always happens. They start out so blissfully perfumey and end up as a battalion of overwhelmingly strong scent molecules that you cannot avoid either in the yard or in the house.
And dammit, I planted those fuckers myself. They make my head ache.

I took a walk. I walked down the sidewalk and then down a dirt road I've never walked before but it's a nice road and I will walk it again. There is one yard that has two dogs who barked at me. One is some sort of husky/German shepherd mix and the other a pit bull.
In other words, they could and probably would kill me if they got out of the fence.
Maybe I won't walk down that road again.

I went to town. I had a firm destination in mind having to do with Jessie's birthday. I was going to get her a gift certificate at a shop that we always find fun things in and I realized, as I was driving there, that I hadn't been in that part of town in forever. When I walked into the place I felt anxious. I felt weepy (see above) and I shopped around a bit to see if they had anything I thought my girl would want worth getting her a gift certificate for.
They did not.
And the woman behind the counter kept talking to me. Asking me inane questions. I was the only person in the shop and there was no way to avoid her. I felt a definite be nice to the old lady vibe.
I ended up buying two cards and getting the hell out of there.
I went somewhere else and bought a gift certificate. A place I will not name here on the off chance that Jessie reads this. But it's a place I am sure she will find something she wants. I also took that picture at the top of the post.
And this one, too. 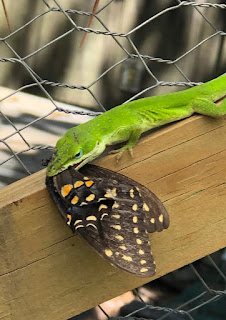 A fierce little green anole was trying his best to swallow a butterfly. A man saw me taking the pictures and he told me that he'd witnessed the killing. That the butterfly had just landed near the lizard and the lizard pounced.
Farewell, lovely butterfly. Farewell.

Then I went to Publix. Because of course I went to Publix. I bought stuff. I came home. I carried stuff in. I was exhausted. These are the days where I wonder if
(A) I am dying, or
(B) Merely suffering a touch of the insanity.

I've made coleslaw for our supper. It's not that good because I am too much of a wimp to add the amount of sugar to the dressing that would make it delicious. I'm also cooking okra and tomatoes. All I have left to do is cook the grouper and a small pot of grits. I have the good kind of grits that take forever to cook. I am thinking about a friend of ours who is very, very ill. Not the friend who lives here. He's...okay. Another friend. He lives in another city, a bit far away and I am thinking about him and his wife and to be honest, mostly her. She has been the quiet partner who has made everything possible for their life to be a sort of magical thing. I think of her now and I can't imagine how she feels, how she is coping although I know she IS coping and doing it like a goddess queen because that's who she is. We have known each other since before Jessie was even born. In fact, we both had our fourth and final babies at about the same time. I love them both. I keep thinking of them and there's nothing I can do to help. They have millions of friends and yes, the four children who adore their parents.
If only we could shoot our love, pure and strong across the miles directly into people's hearts so that they could feel it like you feel full after a good meal that someone made for you or like you feel after you've had the sweetest time with your lover.

I guess I'll send a card.

Hey! I'm going to make a beautiful cake tomorrow. I hope it's beautiful. A chocolate Tres Leches cake. For Jessie. It needs to sit overnight and let all three of the milks soak into it. Won't that be something?