The Complete And Unexpected Delight Of Cooler Weather 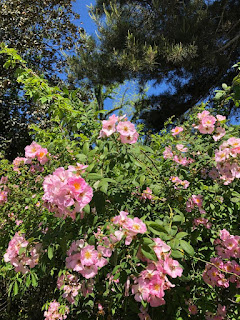 It has been an absolutely perfectly perfect day here in Lloyd. Weather-wise, at least. I decided to take a shortish walk on the sidewalk that goes from the corner a few hundred feet to the east of me to the county line west of me. I had to stop almost immediately though to cross the street and take a picture of a neighbor's roses. They are fabulous every year and you can actually smell them from a distance as they warm in the sun.
I don't think there's been one cloud in the sky all day long and it's been drier and cool enough to work outside without sweating which is what I've done this afternoon although I will admit that I did not do anything very strenuous. I concentrated on the front yard, especially by the fence where I have planted rooted firespike and wild phlox. The invasive bulbed plants I always thought of as wild gladiola but which are not but which I cannot remember the name of because I'm lucky I can remember my own name these days has gone completely crazy.
I've just used The Google and I think these plants may be Van Bourgondien Crocosmia Masoniorum.
I will never remember that shit nor frankly do I see any reason I might need to.
Anyway, they are everywhere and do not really bloom in my yard due to lack of sun and I pulled the ones choking out the plants I do want there along with some dewberry and some thorn vine and a few other random things. I cleaned up the grave of Elvis, my beloved rooster who died too young. And then I got out the big pruners and cut back the Canary Island date palms.
I bitch about these motherfuckers every year because they are lethal. Their fronds are made up of needles that seem to want nothing more than to pierce human skin. Here are some I trimmed and hauled to the burn pile. 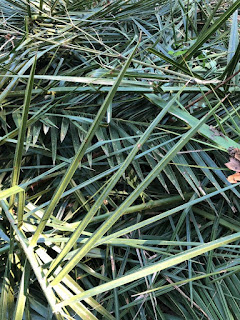 I planted these evil things and I admit that I was wrong, wrong, wrong in doing so. I have no idea what I was thinking. But as I texted to Mr. Moon, these things are going away. ASAP. I don't care what we have to pay to get rid of them. They are quite literally dangerous. They could poke a kid's eye out or lance an arm. When I was a child I accidentally kicked one and had to go to an emergency room because the needle pierced my toe all the way through.

I picked up some branches and also trimmed a few fronds off the innocent Sabal Palms I planted by my front porch. I do not regret planting these and again- hopefully they will one day be tall and proud, ever-guarding the front of this old house. Like the Ashe Magnolias though, they are slow-growers. At least in this yard where there is far more shade than sun.

And that has mainly been my day. I've picked some carrots and kale to go into my supper which is going to be a sort of eggplant parmesan. I am quite looking forward to making it. I've already baked the eggplant. I am trying to decide when to go to over to Apalachicola to hang out with my man and sister-in-law. They have had terrible luck in picking their week to fish. It's so windy there that no one is going out on the water. Not gulf and not river. And I so wanted some grouper. At this rate I'll be lucky to get some shrimp bought on the way home from the coast.

Can you believe the Notre Dame cathedral fire? That's insane and horrible and so sad. I visited that cathedral when I was eighteen years old and of course I can remember standing in awe, gazing at the Rose Window. I pray (in my own way) that the fire was not caused purposefully. That would just be too evil. Unfathomably evil. I cannot imagine all of the art and history that just went up in smoke. To me the cathedral does not necessarily represent a religion or even a country. It represents the spirit of human beings who set themselves to the task of creating beauty and symmetry and awe with stones and glass, sweat, blood, and dreams. An impossible task and yet- one that was achieved and has stood in majestic proof for over eight-hundred years.
The very thought of what it took to conceive of and to build that cathedral makes me wonder if the best, most noble and glorious days of humanity are long past.
I hope not.

Time to go chop some vegetables.