Further Adventures With The Boys 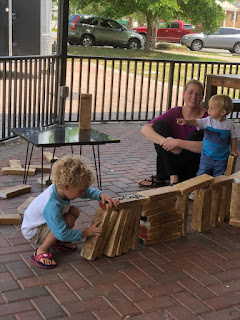 The saddest thing happened today.
Jessie and I went to the Story Hour at the Monticello library which we love and IT HAD BEEN CANCELED DUE TO NO ONE SHOWING UP!
It was going to be a special one too, although we weren't aware of that. It was Pajama Story Hour. Terez wore his Seminole PJ's and I honestly think he was a little heartbroken. There was a meeting going on in the regular room where the fun happens and everything had been set up in the kid's reading room including the shake eggs and the bubble machine.
The beloved bubble machine.
We had a good time anyway, reading books and playing with stuff. And I got to talk to Terez a little bit. Turns out that when he was a child he'd go to the library every day after school and he loved it and that's why he grew up to be a librarian.
Just makes my heart happy.
Then we went to lunch, of course, where the boys played with the giant blocks.
You can tell from looking at the picture that it is not shocking that their daddy is an engineer.
Those boys have skills.
And then we went to the farmer's market and bought produce and came home where theoretically, the boys were going to take naps. In reality, although they both fell asleep on the way home they both woke up when we got here.

And mostly what August and I have done all afternoon is to read books. Many, many books. And then we played the matching game and he beat me and for those of you who do not have grandchildren let me just tell you- they ALWAYS win games.
And not because you let them. They just do.
The gods of games must love young blood. That's my theory at least.

I have sweet potatoes in the oven and a lovely meatloaf ready to go in too. I'm going to make oven "fried" okra and that is going to be our delicious supper.
Hopefully delicious.
Theoretically delicious.

There are six eggs in the basket now. I am thinking about putting a few of the Americauna eggs in there too. I'm pretty sure that those eggs are fertile because Liberace seems to have a special feeling for those two hens. Pansy and Eggy Tina. If we're going to have chicks, let's have chicks. Of course, all of this could be for naught and Dearie might not actually be broody at all. Whatever. If she doesn't start sitting on them within the next week, I'll just take them out and use them. They'll still be fresher than the eggs most people buy in the grocery store.
Trust me on that.

I see that Donald Trump is still the president of the United States.