I have taken no pictures today. Well, I did take a picture of a chicken's butt to send to Jessie to show her that Big Mama's Van Gleet seems to have cleared up.
It may not have been Van Gleet because that seems to require treatment and the only thing I've done to treat the situation is to put cider vinegar in the chicken's water a few times. She may actually have had roosteratitus which is only cured by massive reduction in roosterage.

Okay. Here's the picture of Big Mama's fluffy butt. As well as Connie's and Liberace's. 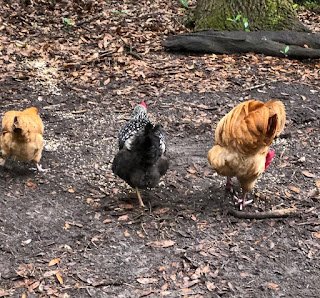 See anything?
No. No you don't. And that's the way we like it.

So what have I done today?
Three more loads of laundry for one thing. Jesus, but that washing machine is a beast. I wish I had some bigger rugs to wash in it! You know what I really like about it? The way it sings a little tune when it's through washing.
Much better than a loud buzz. MUCH better.
My refrigerator does the same thing if one of the doors is open for more than thirty seconds. I like this feature. They're the same brand and I have no idea if they're actually dependable appliances but I love the way they're designed. My refrigerator still thrills me every time I open it.
Here's another feature I really like about the washer. 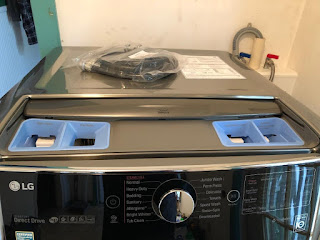 See those blue things on top? Those are the dispensers to put the detergent and bleach and fabric softener in. And when you're finished loading up whichever washing additives you want, there's a little lid that slides forth and covers it all up. 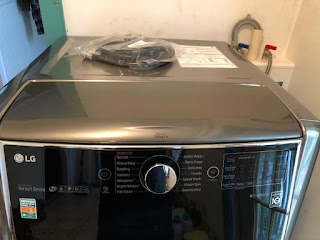 I don't know why I like this so much but I do. It does eliminate some messiness.

All right. I'll stop talking about my washing machine now.

I'm making those NYT's black beans AGAIN! I just can't stop making them. They're so good. So yes, we had soup last night and we're having soup again tonight.
We love soup.
Every time we eat soup one of us says, "Too bad Jay Leno's not here."
We say that because he said a very, very stupid thing one time which was this:
"Soup is just a way of screwing you out of a meal."
Eh, fuck that, Jay.
Obviously the poor man has never had a real bowl of soup in his life. Either that or he's just not right in the head when it comes to what constitutes a meal. But each to his own, right?

So I went to the store today. My big outing. Do you ever wonder if the cashier is judging you on your food choices? I do. Also, do you look at what's in people's carts and judge them on that? Yeah, me too. Sometimes people make me feel guilty with their superior food choices. Sometimes I feel superior. I shouldn't admit that. Also, I just shouldn't do it. Who knows what the real story is? Plus, it ain't my business.

So there were just two people in front of my house on the sidewalk having a loud argument. We listened to see if we needed to intervene. Also, we couldn't help but listen. The doors and windows are open and the guy, especially, was shouting at the top of his lungs.
"You don't even kiss me anymore!" he screamed.
"You don't respect me!" the woman replied.
It didn't appear that it was going to get physical and they've walked on down the street now. Like with the food in someone else's cart- you just never know.
I've been with a few men that weren't really the best boyfriends but only once did I date a guy who hit me. He hit me once.
That was it. We had no more dates.
And he seemed so funny and normal and intelligent and caring and all that stuff.
Until something I said set him off. I can't begin to remember what it was.

I'm grateful, so grateful, that I never fell in love with an abusive man. Well, not that kind of abusive, anyway. One of the things that made me fall in love with my husband is how gentle he was. Okay. Once he did pick a guy up and carry him out of a bar because the man was really drunk and wouldn't stop sniffing me.
Literally. Sniffing me.
But he didn't hurt him.

And I guess that's the daily report. I can hear a hawk calling and a little while ago I heard the "You're sweet, you're sweet, you're sweet" bird. I think it's a mockingbird.
It's time to go punch down the focaccia. I believe it's done "proofing" as they say on the British Baking Show.
It's going to be a good dinner, Jay Leno be damned.
He can enjoy his steak. I won't judge him.