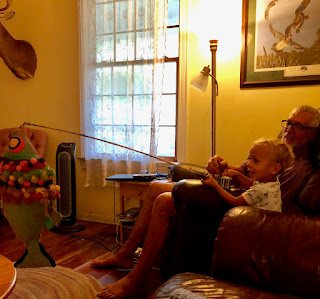 I love that picture. The little boy, so excited to be sitting with his grandfather, reeling in the stuffed fish that a friend made for one of the kids a long time ago. Like I said last night this game has been a constant source of fun for all of the grandchildren. Owen and Gibson still love to play hallway fishing although they make a challenge of taking the fish as far out of the Glen Den as they can and it often gets caught on a piece of furniture and requires someone to go get it unstuck and there is always great raucous laughing when this goes on.
Tradition.
There is no one as tied to tradition as a child. Each and every one of my grandchildren, young and older, have their own personal traditions which must be kept when they spend the night and it is often with great difficulty that they give them up. Last night when it was time for supper, I asked August if he wanted to sit in the high chair or on a big chair.
"I eat on the Teddy Bear chair," he told me. This is the high chair with its sixties decal of a teddy bear on it. I love this high chair. It's wooden and solid as can be and the tray mechanism still works perfectly and it has held all of my grandbabies so far. I bought it for not much at a thrift store and it will be here long after all of those expensive, plastic, high-tech pieces of crap they sell now will be. 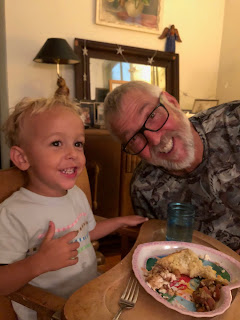 And August still loves it and that is where he eats his meals when he eats with us unless his brother Levon is eating too at which point the smallest brudder gets the teddy bear chair.
I swear. I think Gibson would still sit in it if he could fit.

It was a good overnight. There was a purple cow prepared in one of the traditional purple cow fancy glasses, speaking of tradition. 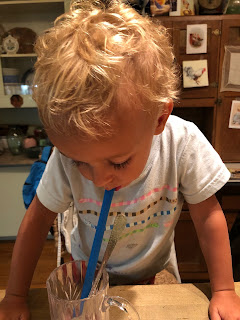 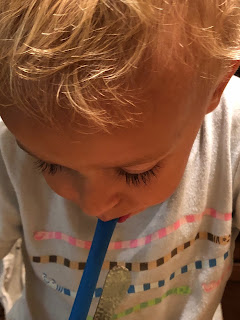 And just in case you didn't really notice those eyelashes. Dude could be a model for Maybelline.

When he got in the bathtub August said, "Mer, I would love you to get in the tub with me."
"Hmmm..." I said. "How about if Boppy gets in the tub with you?"
"Yes!" he said, and Boppy did and just as I always pretend to be the beauty parlor lady when I wash the kids' hair, Boppy pretended to be the barber shop man. I was waiting with a clean towel when all of the washing and shampooing was done and I wrapped him up and dried him off and put on his pajamas and we went to read books on my bed. We read The Little Red Hen Makes A Pizza, of course and Hand, Hand, Fingers, Thumb which he knows by heart now. And then we read It's Time To Sleep My Love which is one of the most beautiful children's books I've ever had the pleasure to read. (Thank you, Lulumarie!) 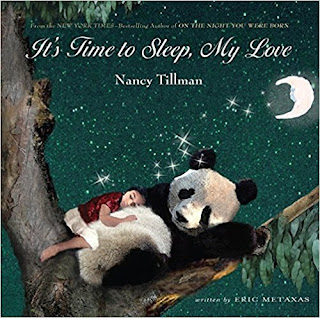 Reading this book to a grandchild before bed is a high holy ceremony according to the Church of the Batshit Crazy.

And after that, the boy was ready to get into the bed which Boppy had made up for him on our floor. There were blankets and bears and Zippy the monkey and another book and assurances that I would be coming to bed very soon.
And then he fell asleep.
That easy.
He slept all night through and we had pancakes this morning and he ate three and a half, as quick as could be. And bacon. And then we played the matching game that Owen and Gibson have always loved. He was very good at it and got the idea right away. I was impressed.
Before his mama got here, I made an interview video.
Yet another tradition. My tradition.


He was happily chewing a piece of gum which you may have noticed.

When Jessie and Levon showed up we spent some time in the big kiddy pool which made August vibrate with excitement and chilliness. The child has about one tenth of an ounce of fat on him. While we were out there, we saw Miss Dearie who had been sitting on the nest, walk out of the henhouse and plop! lay an egg right on the ground. So yesterday's pretty little egg was hers.
She'll figure it out.
We saw Liberace try to have his way with Dearie later on and she turned and pecked him good and went on about her business of scratching in the dirt so I suppose we're about to start seeing how this particular combination of hens and roosters is going to work out and hopefully, we'll be getting more eggs. I got four today, as a matter of fact, which is absolutely lovely.

Another Sunday, this one sweeter than many because of August and then his mother and his brother. Pancakes and bacon, books and hall fishing. Playing in the little pool, eating pimento cheese sandwiches. All of this was goodness.

And then of course the news about Jacksonville.
I don't have the heart to even discuss that. What can one say? One migrant kills a white woman and American needs to close its borders IMMEDIATELY and untold numbers of massacres by white men with guns and well, thoughts and prayers.
Thoughts and prayers.
Fuck that.

I swear to you- if I did not have these children and grandchildren, I would be moving to the country which Trump insists is filled with drug dealers, criminals, and rapists. If they would have me.

I'm sorry. I am starting to feel as if each of my posts is worse than the last. As if my writing is as weary as my soul.
Well. One writes what one knows and as always, I don't know shit. I know there is goodness and I know I am lucky to be surrounded by so much of it in my own tiny little bubble of family love.

Let us soldier on.